SEATTLE, Wash., Sept. 23, 2020 (SEND2PRESS NEWSWIRE) — A new memoir, a powerful coming of age tale, is set to release this fall. “Unlearning to Fly: A Memoir of Navigating the Turbulence and Bliss of Growing Up in the Sky” (ISBN: 978-1735641300), gives a detailed account of how the author, Russ Roberts, not only helped blow up his backyard with dynamite, but also shared a Volkswagen with a moose. 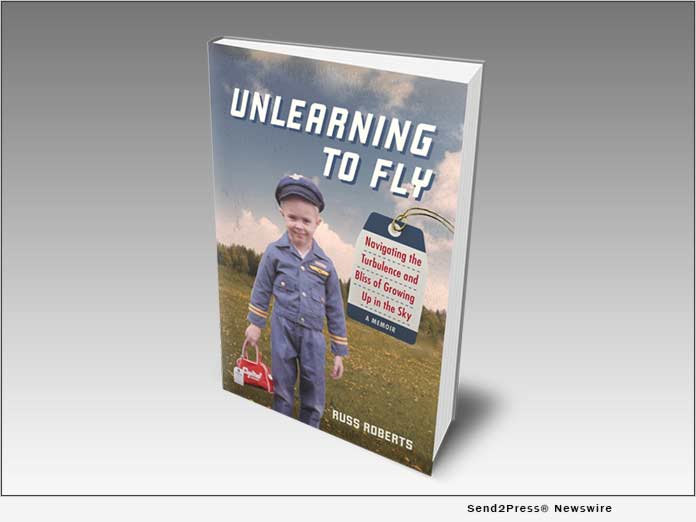 In the air, Roberts was the youngest licensed flight instructor in America. He flew single-engine airplanes across the Atlantic, and commanded airliners around the world. What happened on the ground was quite another story.

Roberts writes how airplanes were the golden thread that secured an otherwise turbulent start to life. In this heartwarming and often heartbreaking story, he tells how he overcame, and had to unlearn what his dysfunctional parents taught him. The author details the difficulties of growing up with an alcoholic parent and describes overcoming his parents strong, peculiar, and even harmful religious teachings.

Airline pilot, broadcaster, sailor, speaker and now author, Captain Russ Roberts says he is, “Not so much an adventurer as a lifetime collector of experiences and stories.”

The book has received several reviews during its pre-publication phase.

Chet Burgess, former CNN, executive producer of Interactive Programming, says, “Russ Roberts is the only person I know who knew exactly what he wanted to be when he grew up, and then realized that dream. ‘Unlearning to Fly’ serves as a literary metaphor for his, sometimes rocky, relationship with his father. This is a good read.

Joanne Rideout, host and creator of radio’s, “The Ship Report,” says, “This is truly the only book that I have ever read that describes so clearly what it must be like to sit in the cockpit of an airplane on the runway and at the controls. It was like I was there myself. And take off – the thrill of it, the wonder of it – it made me want to do it too, something I have never thought much about. It was thrilling and made me want to fly.”

“Unlearning to Fly: A Memoir of Navigating the Turbulence and Bliss of Growing Up in the Sky” will be available on Amazon, Kindle, and Audible in late November 2020.

View More Books and Publishing News
"I'm not so much an adventurer as a lifetime collector of experiences and stories," says author Russ Roberts.

ABOUT THE NEWS SOURCE:
Russ Roberts

Airline pilot, broadcaster, sailor, speaker, and now author, Captain Russ Roberts is not so much an adventurer as a lifetime collector of experiences and stories. Roberts flew the Atlantic alone in single-engine airplanes, sailed the Northwest Passage over the Canadian arctic, helped blow up his backyard with dynamite, was the youngest licensed flight instructor in America, and commanded airliners around the world.

LEGAL NOTICE AND TERMS OF USE: The content of the above press release was provided by the “news source” Russ Roberts or authorized agency, who is solely responsible for its accuracy. Send2Press® is the originating wire service for this story and content is Copr. © Russ Roberts with newswire version Copr. © 2020 Send2Press (a service of Neotrope). All trademarks acknowledged. Information is believed accurate, as provided by news source or authorized agency, however is not guaranteed, and you assume all risk for use of any information found herein/hereupon.