ATLANTA, Ga., Sept. 2, 2020 (SEND2PRESS NEWSWIRE) — At a time when many youth club sports clubs are struggling or shutting down as a consequence of the national pandemic, one metro-Atlanta based club, A5 Volleyball Club, is boldly expanding, offering more world class opportunities for athletes to train and compete. 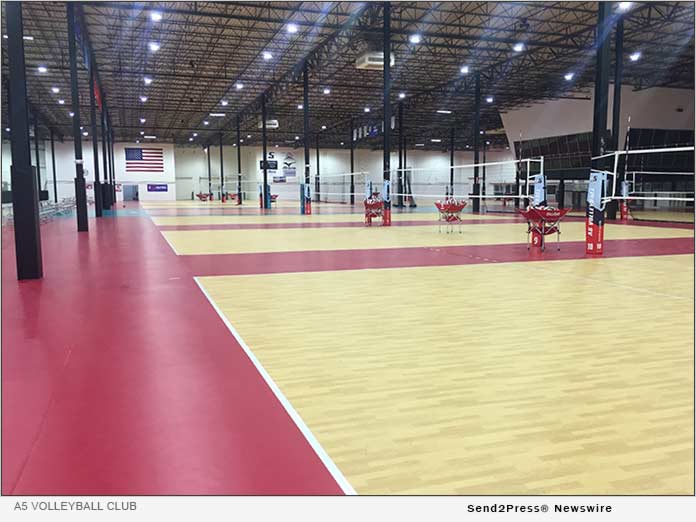 PHOTO CAPTION: Inside the A5 Sportsplex, there are 13 Taraflex courts including an actual Olympic court from the 2016 Rio Olympic games.

Thousands of athletes and families train with A5 making it one of the largest youth club volleyball organizations in the country. A5 recognizes that, now more than ever, kids need outlets to exercise and connect with friends through playing sports.

This facility expansion has been in the works for some time and came together in January when a deal was made with the Andretti family to take over their vacant facility on Alpharetta Hwy in Roswell. The transformation of the 70,000-square foot space has energized the youth volleyball community that was devastated when the 2019-20 season was suspended in March.

Club founder Bob Westbrook said, “We believe this move into our new facility will prove to be a transformative event for the youth volleyball community in Atlanta as well as the Southeast. We are blessed to have this opportunity.”

The A5 Sportsplex will be home to A5 Volleyball Club with the capacity to offer 40+ competitive and regional teams, leagues, and adult play as well as individual volleyball training. The venue will also serve as a volleyball tournament destination hosting teams, regionally, from Florida, Tennessee, North Carolina, South Carolina, Alabama, Louisiana, and nationally as well. Youth sports generated 15 Billion dollars last year in the US as Volleyball continues to be one of the fastest growing sports for young men and women in the country.

The regional and national growth of this business has the potential to bring in millions of dollars to the local economy. On any given weekend during the competitive club volleyball season, tens of thousands of players and their families travel to tournaments. A5’s new facility is poised to become a sought-after tournament destination, drawing players and families from all over the country to stay in hotels, frequenting restaurants and shops in the metro Atlanta area.

Inside the A5 Sportsplex, there are 13 Taraflex courts including an actual Olympic court from the 2016 Rio Olympic games positioned as Center Court. Spectators will enjoy a mezzanine view of all courts as well as having the benefit of bleacher seating on the floor. Five outdoor sand volleyball courts are planned for construction in Fall 2020. These courts will support and take advantage of the tremendous growth in outdoor Beach Volleyball occurring world-wide. A5’s on-site Pro Shop will offer a full line of volleyball apparel, equipment, and accessories. Additionally, the venue has ample parking to accommodate players, families, and fans. Independent restaurant and gaming vendors are planning to occupy additional space in the facility as well helping provide a full-service experience for visitors.

In their new home, A5 will offer elite training year-round as well as competitive teams for athletes of all ages (girls and boys) from beginner to experienced levels. A5 has been making waves in the competitive club volleyball world since its beginning in 2004. Today, there are about 4,500 active clubs in the country. A5 is currently ranked #2 in the country, having earned more bids to the USAV National Championship tournament than any other club nationwide over the last seven years. In 2020, three A5 coaches earned the prestigious “Coach of the Year” award from the American Volleyball Coaches Association (AVCA). This is a record number of coach-of-the- year winners in the history of this award.

A5 Volleyball is moving forward with resilience and renewed vision for the future while remaining true to their mission: Teaching life lessons through the sport of volleyball. Organized sports are a healthy and integral part of youth development. A5’s investment in the local community reflects their commitment to being part of a positive solution, critical to the world we now inhabit.

View More Volleyball News
Club founder Bob Westbrook said, "We believe this move into our new facility will prove to be a transformative event for the youth volleyball community in Atlanta as well as the Southeast."

More from A5 Volleyball Club

ABOUT THE NEWS SOURCE:
A5 Volleyball Club

A5 Volleyball Club is the premier junior club volleyball organization in the Southeast for both girls and boys volleyball. With more than 30 teams from ages 10 through 18, Atlanta club volleyball means A5!

LEGAL NOTICE AND TERMS OF USE: The content of the above press release was provided by the “news source” A5 Volleyball Club or authorized agency, who is solely responsible for its accuracy. Send2Press® is the originating wire service for this story and content is Copr. © A5 Volleyball Club with newswire version Copr. © 2020 Send2Press (a service of Neotrope). All trademarks acknowledged. Information is believed accurate, as provided by news source or authorized agency, however is not guaranteed, and you assume all risk for use of any information found herein/hereupon.