Says Guarnaccia: "The naysayers tried to keep me from living my dreams, but I kept dreaming, and I keep on living. I never stop investing on myself, the pay-off is what I live for."

HOLLYWOOD, Calif., Feb. 15, 2016 (SEND2PRESS NEWSWIRE) — Zak Lee Guarnaccia is a multifaceted actor, Hollywood stuntman, filmmaker, martial artist and fitness expert, whose career has been evolving in film, television, martial arts and fitness for well-over two decades. Guarnaccia is thrilled to join the cast on “Live by Night” playing the role of Adomo Valocco on the upcoming American crime film, written and directed by the Oscar-winning director Ben Affleck, based on the 2012 novel of the same name by Dennis Lehane and distributed by Warner Bros. Affleck is also producing along with Leonardo DiCaprio.

Actor/Stuntman, Executive Producer at LightRow Pictures ( http://www.lightrow.com/ ) Guarnaccia says: “Even though for someone my role might look small, but the truth is there are no small parts, only small actors. With the right actor, in the right role, a few minutes, a handful of words or none, are all that’s needed for magic to happen. Having this fantastic opportunity with only a few lines doesn’t give me an excuse to slack off, instead will boost my passion on what I do best.”

As a performer, Zak Lee Guarnaccia possesses the passion of Antonio Banderas and the intensity of Gary Oldman, along with a dash of an Italian attitude thrown in for spice.

Guarnaccia never forgets his Martial Arts and Fitness roots and has just launched his new fitness product the X3S Bench ( http://www.TheX3Sbench.com/ ) a great piece of equipment to include in any fitness program from Cross Training to Home Training; distributed worldwide by The ABS Company, a company that is specified just for abs exercise and that created the original ABS Roller and several other fitness equipment products.

In addition, Zak Lee Guarnaccia and Paul Lupi, Producer of Lupi Pictures LLC, are in production for 2016 of the independent feature film in the martial-arts, action-thriller genre entitled “Kalm.”

Guarnaccia’s gritty film style and performance grabbed the attention of Paul Lupi whose company Lupi Pictures LLC is now in talks to co-produce properties in the Lightrow roster.

Award-winning actor Zak Lee Guarnaccia’s rugged looks, relentless style of martial arts, and experience in stunt-work and action choreography has lead to his reputation as “The Italian Buster Keaton.”

Guarnaccia keeps showing not just his rugged looks — to play villain or a con man — but as well his Italian comedy timing on Mercury Insurance national commercial on air now: http://youtu.be/Nsd35NsPWvA.

Guarnaccia’s recent appearances include the Pablo henchman on MARVEL TV SERIES “AGENT X” Produced by Sharon Stone, the upcoming TV shows “Rush Hour” and “Criminal Minds Beyond Borders,” “The LAST SHIP,” “NCIS Los Angeles” and “Trafficked” with Ashley Judd (a great movie with the subject on human trafficking) — just to mention a few.

With the new “X3S Dreams, a self-expression” video, says Guarnaccia: “The naysayers tried to keep me from living my dreams, but I kept dreaming, and I keep on living. I never stop investing on myself, the pay-off is what I live for. My Passion is, and always will be, my constant motivation.” Watch Zak’s X3S Bench product launch video: https://vimeo.com/150045568. 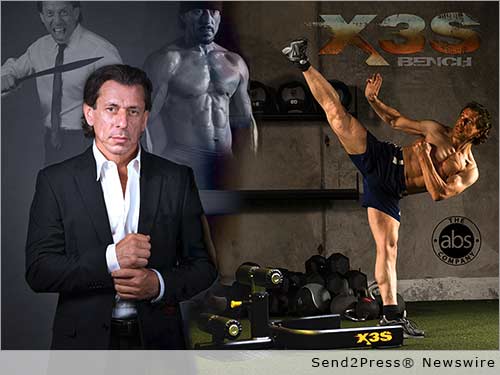 NEWS ARCHIVE NOTE: this archival news content, issued by the news source via Send2Press Newswire, was originally located in the Send2Press® 2004-2015 2.0 news platform and has been permanently converted/moved (and redirected) into our 3.0 platform. Also note the story “reads” counter (bottom of page) does not include any data prior to Oct. 30, 2016. This press release was originally published/issued: Mon, 15 Feb 2016 08:00:38 +0000

View More Business News
Says Guarnaccia: "The naysayers tried to keep me from living my dreams, but I kept dreaming, and I keep on living. I never stop investing on myself, the pay-off is what I live for."

LEGAL NOTICE AND TERMS OF USE: The content of the above press release was provided by the “news source” Zak Lee Guarnaccia or authorized agency, who is solely responsible for its accuracy. Send2Press® is the originating wire service for this story and content is Copr. © Zak Lee Guarnaccia with newswire version Copr. © 2016 Send2Press (a service of Neotrope). All trademarks acknowledged. Information is believed accurate, as provided by news source or authorized agency, however is not guaranteed, and you assume all risk for use of any information found herein/hereupon.