ATLANTA, Ga., May 18, 2017 (SEND2PRESS NEWSWIRE) — When Rayven Symone Ferrell was born, her mom had a strong vision for her. She knew her daughter was destined for great creativity and named her after Raven-Symoné, her favorite character on “The Cosby Show.” Twenty-one years later and mom’s intuition has proven true. The young aspiring actress has already landed a career defining role, playing Sekyiwa Shakur, the baby sister of rap icon Tupac Shakur, in the soon to be released blockbuster film, “All Eyez on Me.” 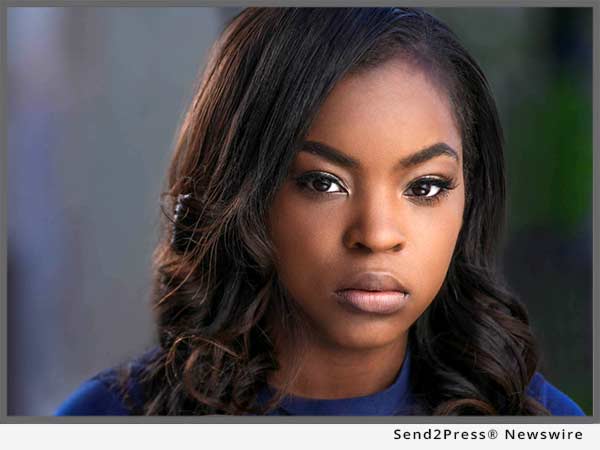 Directed by Benny Boom, and starring another newcomer, Demetrius Shipp Jr. as Shakur, the film is slated to hit theaters on June 16, the late rapper’s 46th birthday.

The role is the opportunity of a lifetime for the aspiring young actress who performed her first play in the sixth grade and booked her first on-camera gig at 17 years old. The film’s debut follows a string of successful appearances for the budding thespian, including the Oprah Winfrey executive produced series “Greenleaf” on OWN and working with Academy Award nominated director, Lee Daniels on the popular Fox series, “STAR,” starring Queen Latifah. To say that Rayven is on a roll is an understatement. Under the tutelage of Atlanta based talent agents, Christopher Young and Tay Smith at J Pervis Talent Agency, Rayven is quickly building up the kind of screen credits that actors dream of in Hollywood.

A Cincinnati, Ohio native, residing in Atlanta, Rayven is currently an undergraduate at Kennesaw State University majoring in Communications, Media Studies. She is humbled by her selection to play the famed actor’s sister. In fact, Rayven reveals that the role struck a special chord with her as she shared similar childhood experiences with her character.

“I have never connected to a character in an actual project as much as I connected with this one,” reveals Rayven. “Sekyiwa Shakur and I shared similarities in our childhood, so I found myself really relating to her. My mom was a single parent of six so we didn’t have much at all. Some days we would have to go without food, water, and electricity, so I understand that struggle and the pain she experienced in her early years.”

“Sekyiwa was the baby of the family so she depended on Tupac. As her big brother, he was the first man in her life and in a sense, the head of their family. They had a very close relationship early on. My mom had to work multiple jobs at times throughout our childhood so I know the importance of that sibling bond. It’s that feeling that your family is all you have so you must be there for each another. As Tupac’s baby sister, they shared a very distinct relationship and I am honored to bring that bond to life on the big screen.”

“All Eyez on Me” is one of the year’s most anticipated films, detailing the life, times and controversy of one of hip hop’s most prolific figures, Tupac Shakur. The movie is named after the artist’s last Death Row Records release.

With her appearance in the film, Rayven Ferrell is creating her own legend, just like her mother knew she would. Like her namesake, Raven-Symoné, she brings depth, authenticity and passion to her roles. Follow her on Twitter and Instagram at @RayvenFerrell. Catch her in “All Eyez on Me” on June 16, 2017.

All Eyez on Me  |  Tupac Shakur

View More Movies and Filmmaking News
"I have never connected to a character in an actual project as much as I connected with this one," reveals Rayven. "Sekyiwa Shakur and I shared similarities in our childhood, so I found myself really relating to her."

Rayven Symone Ferrell was born on September 2, 1995 in Ohio, USA. She is an actress, known for "One and Two" (2015), "All Eyez on Me" (2017) and "Elephant in the Room" (2016). She performed her first play in the sixth grade and booked her first on-camera gig at 17 years old. Under the tutelage of Atlanta based talent agents, Christopher Young and Tay Smith at J Pervis Talent Agency, Rayven is quickly building up the kind of screen credits that actors dream of in Hollywood.

LEGAL NOTICE AND TERMS OF USE: The content of the above press release was provided by the “news source” Rayven Symone Ferrell or authorized agency, who is solely responsible for its accuracy. Send2Press® is the originating wire service for this story and content is Copr. © Rayven Symone Ferrell with newswire version Copr. © 2017 Send2Press (a service of Neotrope). All trademarks acknowledged. Information is believed accurate, as provided by news source or authorized agency, however is not guaranteed, and you assume all risk for use of any information found herein/hereupon.