Stephanie Thornton Plymale's memoir offers insight and inspiration on what it means to survive, rise above, heal and forgive

SEATTLE, Wash., Jan. 28, 2020 (SEND2PRESS NEWSWIRE) — “AMERICAN DAUGHTER” (ISBN: 978-1632992529) tells an extraordinary story of trauma, healing and transcendence in this powerful memoir by Stephanie Thornton Plymale. As CEO and visionary of the Heritage School of Interior Design – the premier interior design school on the west coast – Stephanie Thornton Plymale kept her past a fiercely guarded secret. No one outside her immediate family would ever have guessed that her childhood was fraught with every imaginable hardship: a mentally ill mother who was in and out of jails and psych wards throughout Stephanie’s formative years, neglect, hunger, poverty, homelessness, truancy, foster homes, a harrowing lack of medical care, and ongoing sexual abuse. 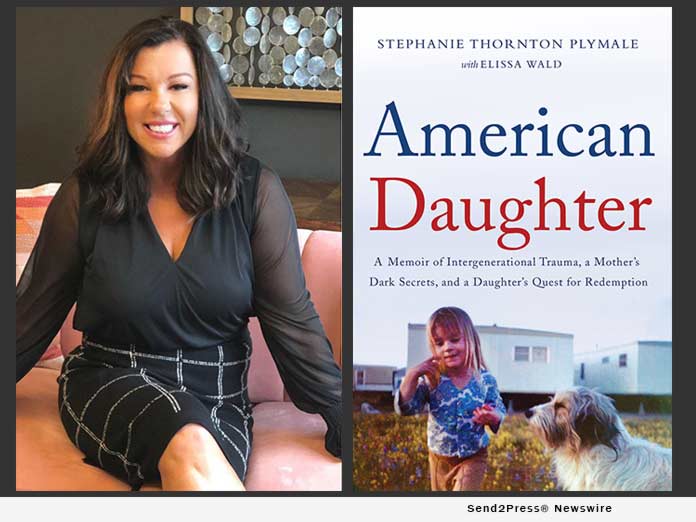 Stephanie, in turn, knew very little about the past of her mother, from whom she remained estranged during most of her adult life. All this changed with a phone call that set a journey of discovery in motion, leading to a series of shocking revelations that forced Stephanie to revise the meaning of almost every aspect of her very compromised childhood. American Daughter is at once the deeply moving memoir of a troubled mother-daughter relationship and a meditation on trauma, resilience, transcendence, and redemption. Stephanie’s story is unique but its messages are universal, offering insight into what it means to survive, to rise above, to heal, and to forgive.

“I unveiled secrets that had been hidden for years and these discoveries rocked my world,” says Plymale. “I was finally able to integrate my childhood story with the adult person that I am today. This process allowed me to forgive my mom when I never thought I could. I found the bravery to share my story with the hope of helping others who are struggling with trauma and broken relationships; to encourage them to share their story, cease living in secrecy, and to find healing. Everyone has a story to tell and peace to be had.”

At age 4, Stephanie Thornton Plymale survived a full throttle, head-on collision in a mail truck stolen by her mother’s boyfriend. Again, at age 5, sat in the back of a van going 70 miles per hour, Stephanie survived a drunken rollover crash. She was twice physically unscathed but left mute with trauma, a condition which would come and go for years. She later suffered life-threatening burns due to neglect and became blind in one eye. Homelessness evolved to isolation in the Dependent Unit of the State of California – to placement in several foster homes, one of which was horribly abusive. By age 10, Stephanie’s experience was that of criminal neglect, chronic hunger, truancy, homelessness, and ongoing sexual violation. The terror and fear that she experienced as a child she later uncovers are the insidious ripple effects from an appalling crime that occurred in the summer of 1953 in Baltimore, Maryland, and made national news.

Stephanie’s mother suffered from severe mental illness; schizophrenia and Dissociative Identity Disorder, was in and out of jail and a series of ghastly psych wards throughout her entire life. Meanwhile and despite all odds, Stephanie’s lifelong desire for a sense of home led to her passion for interior design and burgeoning career in the industry. However, time seemed to stop when Stephanie received a call from her mother after a period of estrangement that was enforced by a court order. Her mother revealed her terminal illness and Stephanie became her mother’s sole guardian.

Timing became critical for Stephanie to address her longing to seek the truth about her devastating childhood and lost heritage. She began a series of “interviews” with her mother in an attempt to find answers and to get her mother to take personal responsibility for the past. In one of these interviews, her mother reveals that she herself was the victim of that horrific crime in 1953 that plagued her as a child and for the rest of her life. This revelation incites the unlikely redemption and reconciliation between mother and daughter. Stephanie’s mother also revealed a stunning and illustrious ancestry that she had kept hidden for decades. Stephanie grew up thinking of herself as “white trash” and knew nothing of the aristocratic family heritage from which she came.

ABOUT THE AUTHOR
Stephanie Thornton Plymale is the CEO of Heritage School of Interior Design. Stephanie calls Portland, Oregon, home – a word with much meaning as she grew up without one. From living in a car on the beach with her five siblings, to isolation in the Dependent Unit of the State of California, to a horribly abusive foster home, Stephanie never experienced a feeling of family as a child. Married at 19 to her high school sweetheart, her desire for family roots helped her to build a stable marriage and loving home for her three children.

From a young age, Stephanie had an insatiable desire to create a feeling of home. This incited her passion for interior design which led to her successful career working in nearly every facet of the industry, including residential, commercial, retail curation, fabrication and staging. After 18 years of owning her own firm, Stephanie felt ready to pursue her next chapter. It was then that she took over Heritage School of Interior Design. Stephanie’s vision was to make education accessible to all who were interested in excelling in the industry. Stephanie has supported hundreds of students in achieving their dream careers. Many alumni have gone on to win prestigious awards and begin wildly successful businesses. Stephanie continues to balance family life with promoting Heritage, the success of its students, staff, continually growing community and philanthropic efforts.

Stephanie’s traumatic childhood, family life and career is unique yet she takes heart in knowing that life’s lessons are universal and that everyone has a story. Her goal is to inspire others to share their stories, receive support and feel empowered by their ability to survive, forgive, heal, transcend and live the life of their dreams.

ABOUT GREENLEAF
Since their start in 1997, Greenleaf has continually evolved to meet the needs of their authors. The core of their business has always been master distribution to major bookstores, airports, and specialty retailers. Over time, Greenleaf recognized their authors’ need for top-quality editorial, design, and strategic marketing services, so they built a team of experts to help authors publish and market their books. To date, Greenleaf’s projects include multiple New York Times and Wall Street Journal best sellers.

View More Books and Publishing News
"I unveiled secrets that had been hidden for years and these discoveries rocked my world," says Plymale. "I was finally able to integrate my childhood story with the adult person that I am today."

Author Stephanie Thornton Plymale is the CEO of Heritage School of Interior Design. Stephanie calls Portland, Oregon, home - a word with much meaning as she grew up without one. From living in a car on the beach with her five siblings, to isolation in the Dependent Unit of the State of California, to a horribly abusive foster home, Stephanie never experienced a feeling of family as a child. Married at 19 to her high school sweetheart, her desire for family roots helped her to build a stable marriage and loving home for her three children.

LEGAL NOTICE AND TERMS OF USE: The content of the above press release was provided by the “news source” Stephanie Thornton Plymale or authorized agency, who is solely responsible for its accuracy. Send2Press® is the originating wire service for this story and content is Copr. © Stephanie Thornton Plymale with newswire version Copr. © 2020 Send2Press (a service of Neotrope). All trademarks acknowledged. Information is believed accurate, as provided by news source or authorized agency, however is not guaranteed, and you assume all risk for use of any information found herein/hereupon.