Birthright is an annual inter-generational concert in honor of the spirit of sharing and cultural legacy inspired by West African Dance and Drumming featuring Farafina Kan and special invited guests.

WASHINGTON, D.C., July 27, 2016 (SEND2PRESS NEWSWIRE) — Brought to you by The Adinkra Group, “Birthright 2016” is a captivating evening of live intergenerational performances by Washington D.C.’s most talented African dance and drumming ensemble and special invited guests. A night of elegance, August 20, 2016, with guests sheathed in African chic couture sets the back drop for the electric and inviting atmosphere attendees have come to know and love when attending this event. 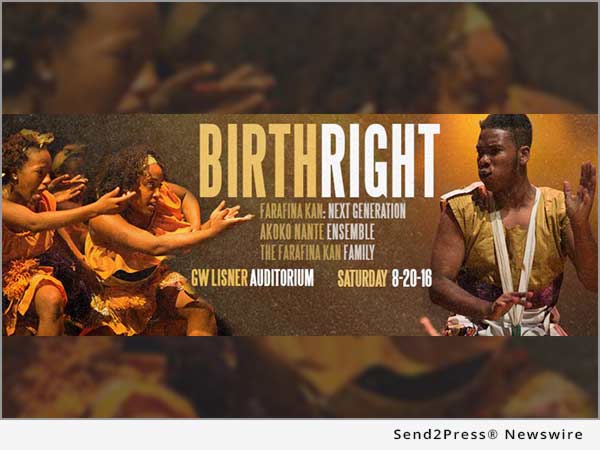 In its third year, this invigorating stage performance acts as a coming together of community. In this current climate of unrest, The Adinkra Group aims to highlight how traditional African values can salve many of the issues we are facing today.

Enjoy performances from Farafina Kan: Next Generation led by former junior company members who have completed high school and begun their college career performing their own musical and dance choreography for the first time.

Special guests based in Queens, N.Y. this year are Akoko Nante Ensemble bringing the spirit of Ghanaian, Haitian, and Cuban Folkloric music and dance to the stage performing for the first time in Washington, D.C.

Held in George Washington University’s storied Lisner Auditorium, Birthright 2016 will empower, educate, and uplift the viewing audience while inspiring them to take action in their own communities. The Arts can heal and rebuild. Birthright 2016 is epitome of art in action to bring change.

About The Adinkra Group (TAG):
The Adinkra Group is a cultural entertainment and resource company based in the Washington, D.C. area committed to partnering with local, national and international performing, teaching and visual artists and arts organizations that hold at their core and promote progressive messages of humanity through their varied forms art. The Adinkra Group is committed to providing high quality superior presentations that entertain, educate, motivate, and inspire action towards creating a better human experience for all people.  More information: http://theadinkragroup.com/.

WHO
The Adinkra Group

PERFORMANCES
One Night Only

More from The Adinkra Group

ABOUT THE NEWS SOURCE:
The Adinkra Group

The Adinkra Group is a cultural entertainment and resource company based in the Washington, D.C. area committed to partnering with local, national and international performing, teaching and visual artists and arts organizations that hold at their core and promote progressive messages of humanity through their varied forms of art.

LEGAL NOTICE AND TERMS OF USE: The content of the above press release was provided by the “news source” The Adinkra Group or authorized agency, who is solely responsible for its accuracy. Send2Press® is the originating wire service for this story and content is Copr. © The Adinkra Group with newswire version Copr. © 2016 Send2Press (a service of Neotrope). All trademarks acknowledged. Information is believed accurate, as provided by news source or authorized agency, however is not guaranteed, and you assume all risk for use of any information found herein/hereupon.