Send2Press › Wire › Technology › Software › AOMEI System Backup Is An All-Round Solution, Not Just as OS Protection But as Much More

AOMEI System Backup Is An All-Round Solution, Not Just as OS Protection But as Much More

NEW YORK CITY, N.Y., May 2, 2017 (SEND2PRESS NEWSWIRE) — AOMEI Technology, the easiest backup service provider, offers the best free system backup solution – AOMEI Backupper. It will automatically include the necessary system and boot files in the backup image to ensure a secure restore to computer with similar and dissimilar hardware. Now, AOMEI Backupper has reached over 10 million happy users and the number is continuously growing. 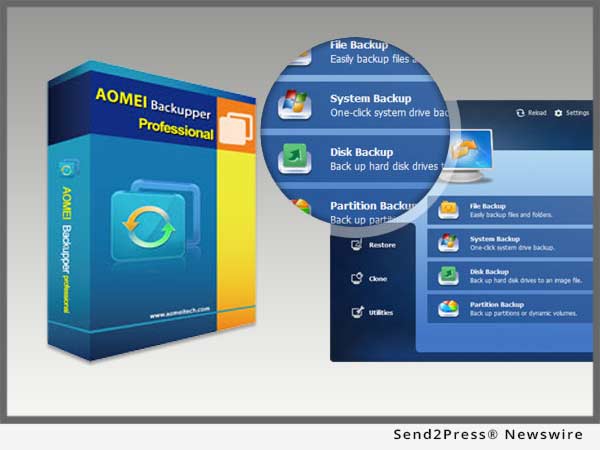 “System backup has never been this simple and straightforward,” Noozil Lander from Auckland said, “For many years I used Ghost to backup my Windows systems. It would drive me crazy when it stopped functioning without explanation. I discovered AOMEI Backupper some years ago and have never looked back. The logic of the interface is easy to follow. I love the Explore Image utility! It’s fast and accurate. Believe me when I say it’s been a repeated lifesaver.”

When you finish installing Windows 10, 8, or 7 with frequently-used programs, it is recommended to create a system image as you will never know when an unexpected issue happens, like system crash, virus attack, hardware failure, etc. With a system backup, you can restore system to earlier date and all the program and settings will be as the state when the backup was created.

When you want to upgrade to a larger hard drive or a faster SSD, you can backup your system to an external hard drive and then boot from AOMEI Bootable Media to restore system image to the new drive so as to migrate OS to SSD without reinstalling Windows and applications.

Besides saving your system from crash, a system backup image can also be used to deploy a well configured system to multiple computers including those with dissimilar hardware. This is really helpful if you manage a lot of computers and want to upgrade their operating system.

As the easiest PC backup software, AOMEI Backupper has many advantages over Windows built-in Backup and Restore tool. It is much faster and secure because it uses block-by-block backup instead of file-by-file; it will compress the backup image file by default (high compression option is also available) to save backup disk space; it can keep many scheduled backup tasks instead of only one.

For making the system backup more efficient, AOMEI Backupper provides advanced automatic backup followed by incremental backup or differential backup. A system backup can be triggered at a specific time in daily, weekly, monthly or on a specific event.

Some additional features to make the backup go smooth:

LEGAL NOTICE AND TERMS OF USE: The content of the above press release was provided by the “news source” Aomei Technology or authorized agency, who is solely responsible for its accuracy. Send2Press® is the originating wire service for this story and content is Copr. © Aomei Technology with newswire version Copr. © 2017 Send2Press (a service of Neotrope). All trademarks acknowledged. Information is believed accurate, as provided by news source or authorized agency, however is not guaranteed, and you assume all risk for use of any information found herein/hereupon.