PHOENIX, Ariz., Aug. 21, 2019 (SEND2PRESS NEWSWIRE) — Arizona Department of Housing presented the 2019 Brian Mickelsen Housing Hero Awards at a recognition ceremony in Scottsdale on August 21. The ceremony was held in conjunction with the 16th Annual Arizona Housing Forum; the premier industry event for housing and community development professionals in the state. 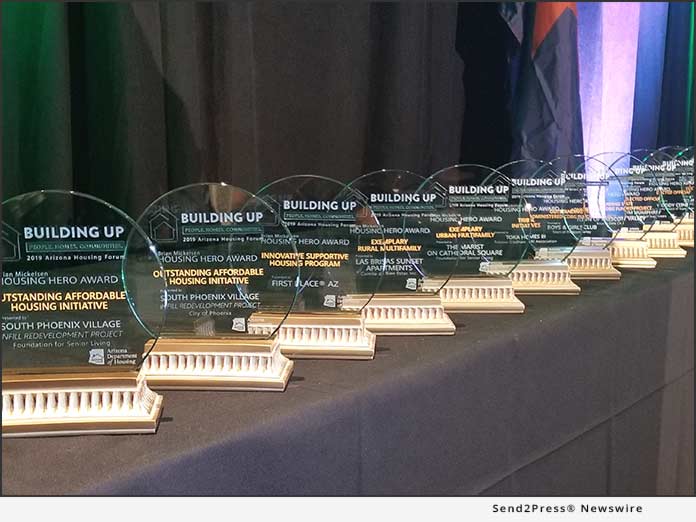 The Housing Hero Award recognizes outstanding achievements by nominees in eight categories and is named in honor of the outstanding public service exemplified by the late Brian Mickelsen, an original member of the Arizona Housing Finance Authority and the city manager for the Town of Cottonwood.

Learn more about Arizona Dept. of Housing at: https://housing.az.gov/

More from Arizona Department of Housing

ABOUT THE NEWS SOURCE:
Arizona Department of Housing

The Arizona Department of Housing was established in 2002 to provide housing and community revitalization to benefit the people of Arizona. The agency provides funding to aid in building stronger communities, with most funding geared toward lower income households and neighborhoods.

LEGAL NOTICE AND TERMS OF USE: The content of the above press release was provided by the “news source” Arizona Department of Housing or authorized agency, who is solely responsible for its accuracy. Send2Press® is the originating wire service for this story and content is Copr. © Arizona Department of Housing with newswire version Copr. © 2019 Send2Press (a service of Neotrope). All trademarks acknowledged. Information is believed accurate, as provided by news source or authorized agency, however is not guaranteed, and you assume all risk for use of any information found herein/hereupon.