"At ACSIA Partners we're glad to support the vital work of finding a cure for Alzheimer's," says CEO Gott. "We're also glad to make a difference for families right now. We can't do anything about the disease itself, other than donate, but we can help families plan for associated long-term care services, which can be substantial."

The event raised $19,000, which will be donated to the Alzheimer’s Association. The contributions were from participating insurance companies as well as ACSIA Partners, company agents, and the CEO.

The mind-robbing disease is a growing threat. Together with other forms of dementia, Alzheimer’s afflicts one in nine American’s age 65 and older; and one in three age 85 and older. At present it can’t be prevented, cured, or even slowed, the association reports. So casualties could swell in the years ahead. From 2000 to 2013, death attributed to Alzheimer’s increased 71 percent.

“At ACSIA Partners we’re glad to support the vital work of finding a cure for Alzheimer’s,” says Gott. “We’re also glad to make a difference for families right now. We can’t do anything about the disease itself, other than donate, but we can help families plan for associated long-term care services, which can be substantial.”

“As Alzheimer’s progresses, people may forget to eat, or have trouble bathing or toileting,” Gott explains. “Someone will have to help them, either a family member or paid professional. Planning for this can really help, personally as well as financially.”

“Wiggin’ Out” was attended by Hollywood actors, 150-plus company agents, and assorted guests. The event was part of a three-day ACSIA Partners conference that included keynotes by the co-producers of “It Snows All the Time” (a feature film about Alzheimer’s), and breakout sessions on long-term care planning.

Co-producers Brett Cullen and Erich Hover also play lead roles in the film. Cullen is best known for starring roles in “Apollo 13,” “The Dark Knight Rises,” “42” and “The Guilt Trip” with Barbra Streisand. Hover had his first movie break acting alongside Brad Pitt and Philip Seymour Hoffman in “Moneyball.” His experience with Alzheimer’s in his family motivated him to co-create “It Snows All the Time.”

Pictures and videos from the event are available at https://www.acsiapartners.com/wiggin-out-for-alzheimers/. 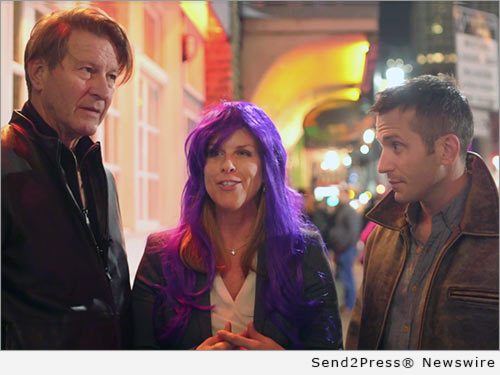 NEWS ARCHIVE NOTE: this archival news content, issued by the news source via Send2Press Newswire, was originally located in the Send2Press® 2004-2015 2.0 news platform and has been permanently converted/moved (and redirected) into our 3.0 platform. Also note the story “reads” counter (bottom of page) does not include any data prior to Oct. 30, 2016. This press release was originally published/issued: Wed, 20 Jan 2016 06:00:55 +0000

View More Corporate Social Responsibility News
"At ACSIA Partners we're glad to support the vital work of finding a cure for Alzheimer's," says CEO Gott. "We're also glad to make a difference for families right now. We can't do anything about the disease itself, other than donate, but we can help families plan for associated long-term care services, which can be substantial."