CYPRESS, Texas, July 12, 2022 (SEND2PRESS NEWSWIRE) — One single encounter with the police can change a young person’s life forever — especially children of color. “A Black or Brown child acting out at school or having a bad day can very quickly find themselves enmeshed into two very broken systems,” says filmmaker and PrettyWork Creative CEO, Lisa N. Alexander. “Kiddos without family support not only become part of the juvenile correctional system but oftentimes the foster care system as well,” she continued. Alexander worked with Collective Action for Youth (CA4Y) to produce and direct the documentary, “Just One.” 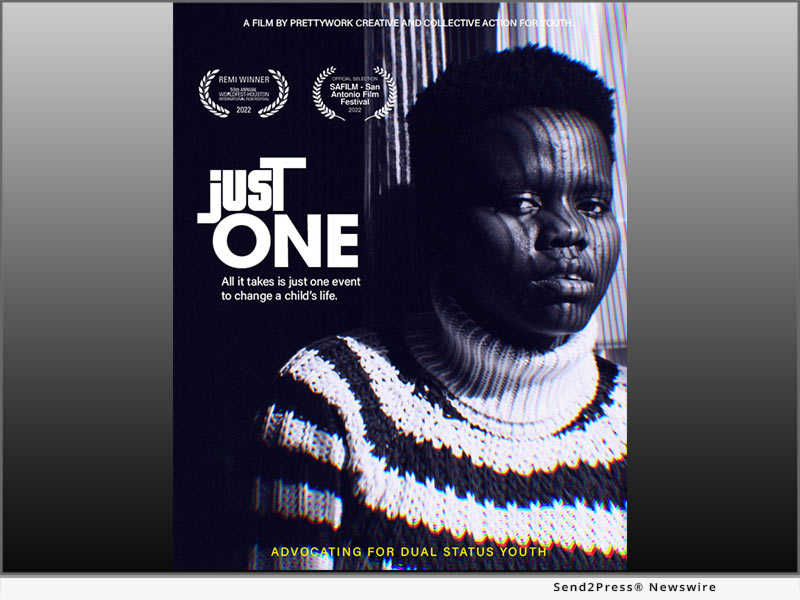 The film tells the story of two young people who overcame life in both systems and has been selected for screening at the 28th Annual San Antonio Film Festival. The film will screen on Wednesday, August 3 between 5 and 7 p.m. at the Radius Center, 106 Auditorium Circle #120, in San Antonio, TX.

“I had no idea what a dual-status youth was before taking this project,” said Alexander. “I was unaware that this population even existed and that organizations like Collective Action for Youth were helping these incredible young people navigate their journeys,” she continued. “It was truly an honor to help them tell their story,” she said.

The documentary focuses on the stories of CA4Y staff members, Dieter Cantu and Angel Jackson. The two share the moment their lives were forever changed, how they overcame their challenges and the policies and legislation they’re working to change. “In my initial meeting it was made quite clear that whatever work I produced had to depict them from an empowered place,” Alexander remembers. “There would be no victimizing or ‘white saviors’ to edify,” she recalled.

“Just One” opens with a dramatic court scene and has an unexpected twist at the end. It also includes a heart-wrenching interview with former Texas Juvenile Correctional Officer, Sharee Cammon. Harris County Dual Status Juvenile Probation Department Supervisor, Deidra Ewing assures viewers that the department is more “compassionate” and does what she calls “heart work.”

This is the second film festival recognition for “Just One.” The film won a Silver Remi from the 55th WorldFest Houston International Film Festival in April.

To purchase tickets to the screening of “Just One” go to: https://safilm.com/

Known as The Marketing Stylist® for most of her career, Lisa N. Alexander is the owner of the award-winning creative agency PrettyWork Creative LLC (PWC), she serves as the company’s CEO and creative director. She along with her team help their clients tell amazing stories through video. Lisa and her husband Elgin Alexander produced their first documentary entitled, “What Mercy Looks Like” in 2017 and the project is available to watch on Amazon.com. It is a story about the volunteers who helped rebuild Houston after Hurricane Harvey and the organization that spearheaded the mission. The documentary won a Gold Remi at the 2018 WorldFest Houston International Film Festival and was Selected for Showing at the San Antonio Film Festival.

PrettyWork Creative LLC, is an award-winning, Black-woman-owned, Cypress-based studio specializing in video production and storytelling. The agency also provides brand development, and communication, PR and social media strategies to its clients. The organization believes every business deserves not only pretty work but branded work that tells each company’s story across multiple channels.

About Collection Action for Youth:

Collective Action for Youth centers experiences of impacted people to transform systems and create solutions. Their aim is to create an aligned and data-driven system that is inclusive of families and caregivers, committed to equity, and responsive to youths’ individualized needs.

View More Movies and Filmmaking News
"A Black or Brown child acting out at school or having a bad day can very quickly find themselves enmeshed into two very broken systems," says filmmaker and PrettyWork Creative CEO, Lisa N. Alexander.

ABOUT THE NEWS SOURCE:
PrettyWork Creative

PrettyWork Creative LLC, is an award-winning, Black-woman-owned, Cypress-based studio specializing in video production and storytelling. The agency also provides brand development, and communication, PR and social media strategies to its clients. The organization believes every business deserves not only pretty work but branded work that tells each company's story across multiple channels.

LEGAL NOTICE AND TERMS OF USE: The content of the above press release was provided by the “news source” PrettyWork Creative or authorized agency, who is solely responsible for its accuracy. Send2Press® is the originating wire service for this story and content is Copr. © PrettyWork Creative with newswire version Copr. © 2022 Send2Press (a service of Neotrope). All trademarks acknowledged. Information is believed accurate, as provided by news source or authorized agency, however is not guaranteed, and you assume all risk for use of any information found herein/hereupon.