Send2Press › Wire › Religion and Churches › Baha’is of Detroit Tri-County Area to mark the 200th Anniversary of the Birth of Baha’u’llah, Founder of the Baha’i Faith

Baha’is of Detroit Tri-County Area to mark the 200th Anniversary of the Birth of Baha’u’llah, Founder of the Baha’i Faith

DETROIT, Mich., Oct. 10, 2017 (SEND2PRESS NEWSWIRE) — Bahá’ís of the Detroit Tri-County Area (Wayne, Macomb and Oakland Counties) are preparing to mark the 200th anniversary of the birth of Bahá’u’lláh, the Founder of the Bahá’í Faith, on Oct. 22, 2017 at 3 p.m. at the Flagstar Strand Theatre for the Performing Arts in downtown Pontiac. 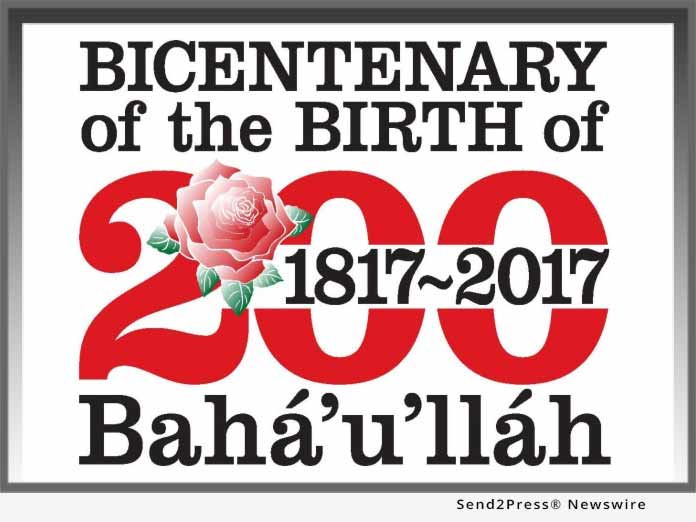 The program, entitled “Ancient Beauty,” is a celebration of the oneness of humanity through the performing arts and storytelling that recognizes the contributions Bahá’u’lláh made to humanity.

The event will include performances by Sounding Light, the School of World Music & Dance, Spirits Rising, Jazz Quintet for the Nightingale, and The Voices of Oneness featuring Lady Peachena and the Late Show choir.

“We have created a space to bring together people of diverse backgrounds to celebrate the birthday of Bahá’u’lláh and His teachings of racial justice, the equality of women and men and the oneness of humanity,” said Bahá’í Faith member Beverly Nichols at the Detroit Bahá’í Center. “Bahá’u’lláh calls us the members of one human family, the flowers of one garden, the fruits of one tree.”

The Jazz Quintet for the Nightingale brings together celebrated metro Detroit jazz musicians Marion Hayden, Mark Stone, GayeLynn McKinney, and Matt Dufresne. Led by pianist Bob Schneeweis, the group will perform music by Dizzy Gillespie, written in honor of Enoch Olinga. Grammy-nominated Lady Peachena and the Late Show Choir, who have performed many times on National television and recently performed with Kirk Franklin and Le’Andria Johnson at the Grammy Lifetime Achievement Awards for Shirley Caesar, will perform together with the Voices of Oneness Choir which gathers singers from the Metro Detroit community. Each of these groups, in addition to their traditional repertoire, will perform original work commissioned specifically for this momentous occasion.

Bahá’u’lláh was a spiritual teacher Who taught, at the time our Civil War was raging, a vision of racial justice, equality of men and women, and the oneness of humanity, which has been the basis of a worldwide process of social transformation and community-building which is unique in its global scope and the diversity of its participants.

“Ancient Beauty” celebrates the transformative impact of Bahá’u’lláh’s teachings on the lives of individuals, families, and communities around the country and the world. Bahá’u’lláh’s vision of the oneness of humanity is seen by Bahá’ís as an antidote to the racial prejudice and materialism that are corroding American society.

“Ancient Beauty” is part of a series of activities generated at the grassroots level all around the country entitled “Light of Unity Festival”, which reinforces Bahá’u’lláh’s vision of the oneness of humanity and empowers participants to contribute. Activities will include drama, music, art exhibits, storytelling, service projects, prayer and devotional programs.

At the national level, the Bahá’í House of Worship in Wilmette, Illinois will host a nine-week series of programs beginning in early September on themes applying the principle of the oneness of humanity to contemporary challenges, including environmental justice, race relations, indigenous peoples, human rights, and the harmony science and religion. Learn more: https://www.bahai.us/bahai-temple/.

At the international level, there will be similar activities and events celebrated on every continent of the planet.

The “Ancient Beauty” event will be open to the public and admission is free. To reserve your seats, learn more and get involved, go to: https://bahaisofoaklandcounty.org/content/bicentenary-celebration.

Who is Bahá’u’lláh?
Bahá’u’lláh (1817-1892), whose name means “The Glory of God,” is considered by millions around the world as the Divine Educator for this age, Whose coming was foretold by all of the Divine Messengers of the past. In His writings, Bahá’u’lláh outlines a framework for the development of a global civilization which takes into account both the spiritual and material dimensions of human life. His teachings, centered around the recognition of the oneness of humanity, offer a compelling vision of a future world united in justice, peace, and prosperity.

Bahá’u’lláh’s coming was heralded by the Báb (1819-1850), meaning “the Gate.” The Báb declared His Divine Mission in 1844, which is considered the beginning of the Bahá’í Era – a new cycle of human history and social evolution.

“The peoples of the world, of whatever race or religion, derive their inspiration from one heavenly Source, and are the subjects of one God.” – Bahá’u’lláh.

The Bahá’í Faith originated in Iran in the mid-19th century. In less than 200 years it has become a universal faith present in every country in the world with adherents from virtually every national, ethnic, religious and tribal background.

A Movement of Personal and Social Transformation:
The international Bahá’í community, numbering more than five million, is quite possibly the most diverse organized body of people on the planet.  United by their belief in Bahá’u’lláh, and inspired by His teachings, members strive to live out the twofold moral purpose of transforming their own characters while simultaneously contributing to the advancement of society. Bahá’u’lláh taught that religion is a cohesive force in society and a system of knowledge that has, together with science, propelled the advancement of civilizations

Individuals pray daily and observe an annual period of fasting. The Bahá’í Faith has no clergy or sacraments, and has very simple practices for life transitions such as marriage and funerals.

The affairs of the Bahá’í community are administered, without clergy, through institutions established by Bahá’u’lláh to foster universal participation and to diffuse knowledge, love, and unity.

For more information on the event and history of the organization and faith, please visit: https://bahaisofoaklandcounty.org/content/bicentenary-celebration.

Baha'u'llah  |  Spiritual Assembly of the Baha'is of Troy

View More Religion and Churches News
"We have created a space to bring together people of diverse backgrounds to celebrate the birthday of Baha'u'llah and His teachings of racial justice, the equality of women and men and the oneness of humanity," said Baha'i Faith member Beverly Nichols at the Detroit Baha'i Center.

More from Baha'is of Oakland County

ABOUT THE NEWS SOURCE:
Baha'is of Oakland County

The Bahá’i community of Oakland County, Michigan warmly invites you to explore the spirituality, beauty, and fellowship of the Báha’i Faith at our local events. Bahá’is often gather in peoples' homes and work together alongside their neighbors to build a future that is balanced and prosperous, both materially and spiritually. Baha'is of Oakland County serves the Detroit Tri-County Area (Wayne, Macomb and Oakland Counties) in Michigan.

LEGAL NOTICE AND TERMS OF USE: The content of the above press release was provided by the “news source” Baha'is of Oakland County or authorized agency, who is solely responsible for its accuracy. Send2Press® is the originating wire service for this story and content is Copr. © Baha'is of Oakland County with newswire version Copr. © 2017 Send2Press (a service of Neotrope). All trademarks acknowledged. Information is believed accurate, as provided by news source or authorized agency, however is not guaranteed, and you assume all risk for use of any information found herein/hereupon.