“We are very pleased to report our fourth quarter and year-end results. In 2017, we continued to experience strong organic growth in our existing San Diego and Coachella Valley markets, and we expect to see similar results in our recent expansion into Orange County,” commented Nathan Rogge, President and CEO of Bank of Southern California.

In addition to the company’s solid financial performance, in 2017 the bank continued to build on its momentum to continue to create an organization that is the bank and employer of choice for Southern California business owners and our employees, with the company executing on two strategic initiatives focused on the customer experience and employee engagement. “We are very grateful for our loyal clients, and our experienced team of business banking professionals, who are the reason for our success in 2017,” concluded Rogge.

For more details about our quarterly results, please visit the “About Us” / “Financials” page of our website and follow the link labeled Quarterly Results and Trends: https://www.banksocal.com/about-us/financials/

A growing community bank established in 2001, Bank of Southern California, N.A., with headquarters in San Diego, CA, is locally owned and managed, and offers a range of financial products and services to individuals, professionals, and small-to-mid sized businesses. The Bank’s solution-driven, relationship-based approach to banking provides accessibility to decision makers and enhances value through strong partnerships with its clients. The Bank currently operates seven branches in San Diego and the Coachella Valley in Riverside County, and a production office in Orange, CA.

Forward-looking statements can be identified by the fact that they do not relate strictly to historical or current facts. They often include the words “believe,” “expect,” “anticipate,” “intend,” “plan,” “estimate,” or words of similar meaning, or future or conditional verbs such as “will,” “would,” “should,” “could,” or “may.” Forward-looking statements are not guarantees of future performance, nor should they be relied upon as representing management’s views as of any subsequent date. Future events are difficult to predict. Forward-looking statements involve significant risks and uncertainties and actual results may differ materially from those presented, either expressed or implied, in this news release. Factors that might cause such differences include, but are not limited to: the ability of the Bank to successfully execute its business plan; changes in interest rates and interest rate relationships; changes in demand for products and services; the degree of competition by traditional and non-traditional competitors; changes in banking legislation or regulation; changes in tax laws; changes in prices, levies and assessments; the impact of technological advances; the outcomes of contingencies; trends in customer behavior as well as their ability to repay loans; and changes in the national and local economy.

Bank of Southern California undertakes no obligation to update or clarify forward-looking statements, whether as a result of new information, future events or otherwise. 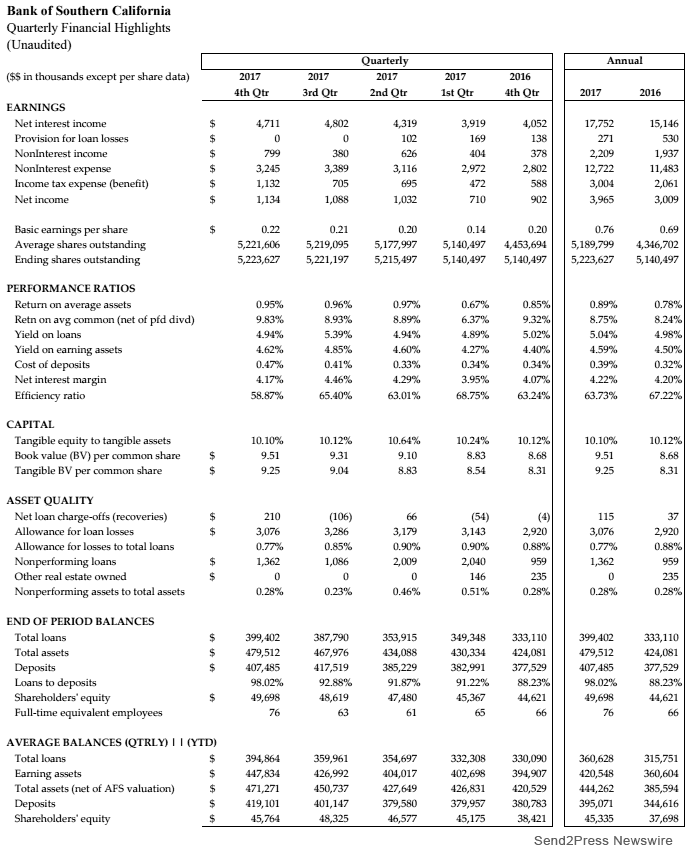 View More Banking News
"We are very pleased to report our fourth quarter and year-end results. In 2017, we continued to experience strong organic growth in our existing San Diego and Coachella Valley markets, and we expect to see similar results in our recent expansion into Orange County," commented Nathan Rogge, President and CEO of Bank of Southern California.

LEGAL NOTICE AND TERMS OF USE: The content of the above press release was provided by the “news source” Bank of Southern California NA or authorized agency, who is solely responsible for its accuracy. Send2Press® is the originating wire service for this story and content is Copr. © Bank of Southern California NA with newswire version Copr. © 2018 Send2Press (a service of Neotrope). All trademarks acknowledged. Information is believed accurate, as provided by news source or authorized agency, however is not guaranteed, and you assume all risk for use of any information found herein/hereupon.