SAN DIEGO, Calif., Jan. 4, 2013 (SEND2PRESS NEWSWIRE) — Bank of Southern California, a locally owned community business bank, has been recognized as one of the top small business lenders among medium sized banks for the largest number and dollar volume of 7(a) loans in 2012 in the greater San Diego area according to the U.S. Small Business Administration.

In addition, Banking Grades, which is a grading tool from Multifunding, a financial advisory provider that ranks every FDIC insured bank based on their commitment to small business lending, continues to issue an A rating to Bank of Southern California for the amount of loans the bank has made to small businesses. By contrast, many other banks in the area received much lower grades.

“We know that local businesses are absolutely essential to our local economy,” says Nathan Rogge, CEO of Bank of Southern California. “We’ve always been focused on providing small businesses the access to the capital they need to help them grow and expand. It’s nice to be recognized which shows that we are meeting the needs of our community.” 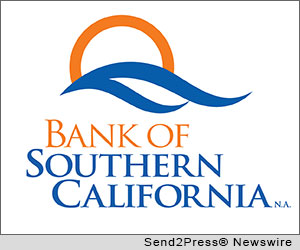 NEWS ARCHIVE NOTE: this archival news content, issued by the news source via Send2Press Newswire, was originally located in the Send2Press® 2004-2015 2.0 news platform and has been permanently converted/moved (and redirected) into our 3.0 platform. Also note the story “reads” counter (bottom of page) does not include any data prior to Oct. 30, 2016. This press release was originally published/issued: Fri, 04 Jan 2013 07:56:02 +0000

LEGAL NOTICE AND TERMS OF USE: The content of the above press release was provided by the “news source” Bank of Southern California NA or authorized agency, who is solely responsible for its accuracy. Send2Press® is the originating wire service for this story and content is Copr. © Bank of Southern California NA with newswire version Copr. © 2013 Send2Press (a service of Neotrope). All trademarks acknowledged. Information is believed accurate, as provided by news source or authorized agency, however is not guaranteed, and you assume all risk for use of any information found herein/hereupon.