Bay Brewers and Half Time Partner to Deliver Series of Mixed Packs, Starting with SF Beer Week Beers, to Consumers in 33 States 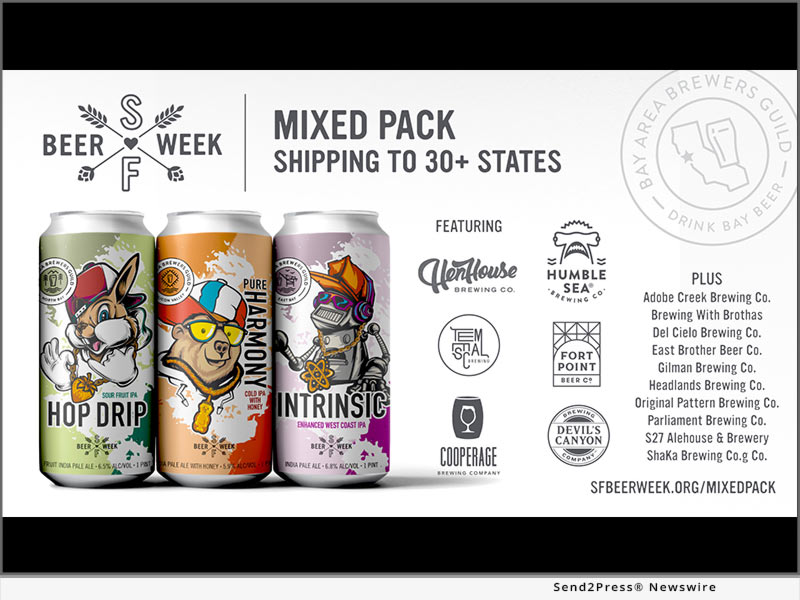 This partnership with a national direct-to-consumer retailer means the Guild will be able to showcase its membership of independent and world-class craft breweries to beer lovers within and outside of the Bay Area.

The series of mixed packs, released periodically throughout 2022, will directly support the work of the Guild, and feature both singular creations and brews that rarely, if ever, make it outside of the Bay Area.

The SF Beer Week Mixed Pack is beginning to land at the doors of craft beer fans. It contains twelve beers in which 16 brewers from the Bay Area Brewers Guild had a hand, including three one-off official SF Beer Week collaboration beers, each brewed by a team of member breweries using ingredients from Admiral Maltings and sporting labels designed by Barretto-co.

“Thanks to this first-of-its-kind partnership with Half Time, we’re able to curate a taste of SF Beer Week and get these special releases into the hands of beer lovers across the country,” says Bay Area Brewers Guild Executive Director Joanne Marino. “It’s thrilling to hear from people who lived in the region before and have fond memories of how special SF Beer Week is, and still others who are curious to try new beers from Bay Area breweries.”

SF Beer Week is Back

Continuing through Feb. 20, 2022, SF Beer Week, organized by the Bay Area Brewers Guild, continues to surprise and delight as craft breweries, bars and beer-savvy restaurants add to the collection of events that make this annual celebration of the Bay Area’s unique beer culture so memorable. Visit https://sfbeerweek.org/

About the Bay Area Brewers Guild

The Bay Area Brewers Guild is a non-profit 501(c)(6) trade association. Its mission is to support and promote local independent craft beer and breweries throughout the greater Bay Area. Stay atop the region’s world-class craft beer scene year-round at DrinkBay.Beer ( https://drinkbay.beer/ ).

Images for editorial use, including colorful collab cans:

View More Food and Beverage News
“Thanks to this first-of-its-kind partnership with Half Time, we’re able to curate a taste of SF Beer Week and get these special releases into the hands of beer lovers across the country,” says Bay Area Brewers Guild Executive Director Joanne Marino.

LEGAL NOTICE AND TERMS OF USE: The content of the above press release was provided by the “news source” Bay Area Brewers Guild or authorized agency, who is solely responsible for its accuracy. Send2Press® is the originating wire service for this story and content is Copr. © Bay Area Brewers Guild with newswire version Copr. © 2022 Send2Press (a service of Neotrope). All trademarks acknowledged. Information is believed accurate, as provided by news source or authorized agency, however is not guaranteed, and you assume all risk for use of any information found herein/hereupon.