MADRID, Spain, June 22, 2022 (SEND2PRESS NEWSWIRE) — As an amateur social project of the famous Dominican plastic surgeon, Luis Lopez Tallaj MD, trained in Brazil 20 years ago, has released recently on YouTube, the dramatic documentary “Besos de plástico” (Plastic Kisses). It is already available on his YouTube channel Lopeztallaj, this Hispanic or Latin project with closed captions in English, French and Portuguese is a warning to the global population of the risks taken with biopolymers injections. 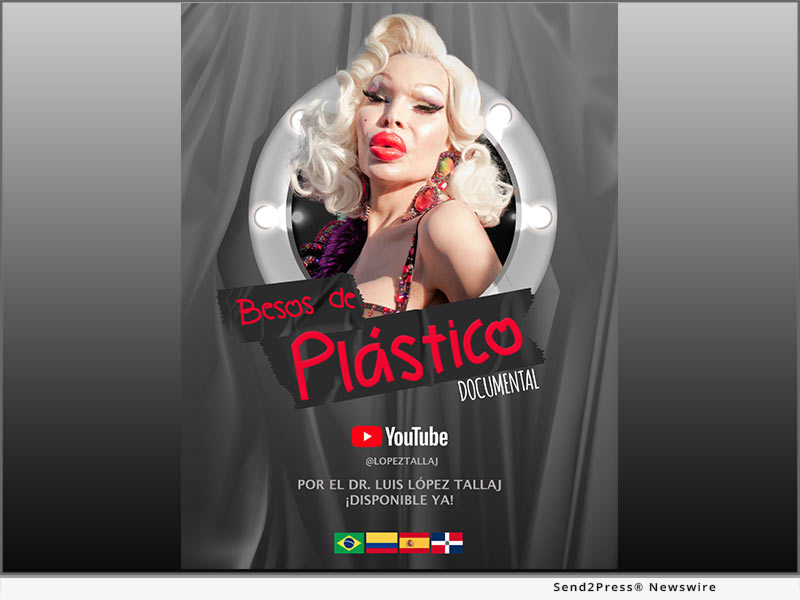 In “Plastic Kisses,” the Dominican plastic surgeon, alerts about the complications involved in the secrecy of the injections of alloplastic material, which have left more than a million victims with facial and corporal consequences in Iberoamerica from the disease known as Iatrogenic Alogenosis.

Testimonies from victims, wake-up calls of surgeons from both continents, possible correction of deformities, the procedure of lip harmonization and more, to create awareness and the prevention of more victims.

“In just ten minutes the spectator can have a very accurate idea of the message we want to spread, warning and prevention,” said Dr. L. Tallaj.

To learn more and watch the documentary visit: https://youtu.be/dXzU6PM_qUI

Dr. Luis López Tallaj @lopeztallaj was born in the city of Santiago de Los Caballeros in 1971 in the north of the Dominican Republic.

Graduated as a doctor of medicine from the Pontificia Universidad Católica Madre y Maestra in 1995. He is Head of the Department of Plastic Surgery at the Corazones Unidos Clinic in Santo Domingo, and founder of the prestigious Institute of Anti-Aging Medicine Puntacana Rejuvenation Center.

He completed his specialty in Aesthetic and Reconstructive Plastic Surgery at the Santa Casa de la Misericordia General Hospital in the City of Rio de Janeiro in Brazil 20 years ago. Specialist in Anti-Aging Medicine from the University of Seville.

At the American Society for Aesthetic Plastic Surgery, he was Chair of the International Committee from 2011 to 2016. Member of the ASPS and ASAPS.

He is the only Hispanic member of the United States Physicians Coalition for Injectable Safety.

He is also an author who has previously published three books, as well as the first guide on healthy infant feeding “Eat and Grow” which is available in 7 languages ​​on Amazon now.

View More Movies and Filmmaking News
"In just ten minutes the spectator can have a very accurate idea of the message we want to spread, warning and prevention," said Dr. L. Tallaj.

Luis Lopez Tallaj MD is one of the best plastic surgeon in Dominican Republic and the most recognized Dominican plastic surgeon inside and outside the country. Graduated as Doctor of Medicine of the 1995 class of the Pontificia Universidad Católica Madre y Maestra PUCMM. Dr. Lopez Tallaj is approved by the Ministry of Higher Education and Science and Technology, MESCYT, Full member of the Illustrious Official College of Physicians of Madrid under #282874443.

LEGAL NOTICE AND TERMS OF USE: The content of the above press release was provided by the “news source” Luis Lopez Tallaj MD or authorized agency, who is solely responsible for its accuracy. Send2Press® is the originating wire service for this story and content is Copr. © Luis Lopez Tallaj MD with newswire version Copr. © 2022 Send2Press (a service of Neotrope). All trademarks acknowledged. Information is believed accurate, as provided by news source or authorized agency, however is not guaranteed, and you assume all risk for use of any information found herein/hereupon.