With a record number of teams signed up for this year's competitions, the Brazilians are writing a new chapter on its motorcycle culture and keeping it as grassroots as possible

SOROCABA, SP, Brazil, Sept. 23, 2020 (SEND2PRESS NEWSWIRE) — It’s not a secret that Covid-19 had 2020 pretty much canceled all over, affecting some of the major events in the USA and abroad, but has also brought people together and fired up new ways for connecting and exchanging ideas, says the Brazilian Flat Track League. 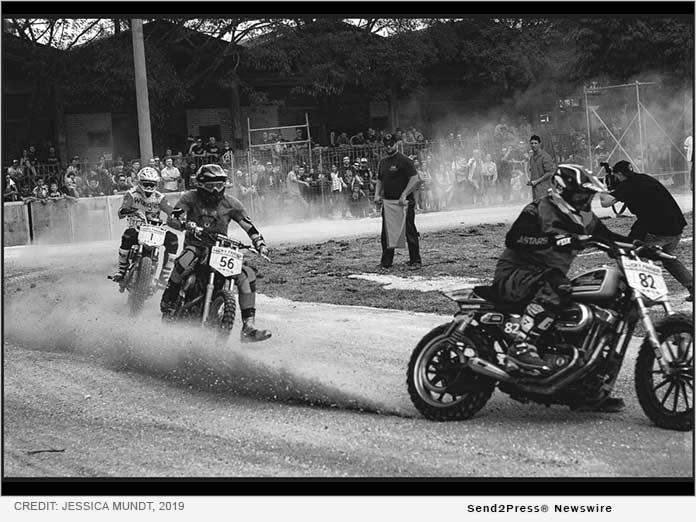 In Brazil, the two biggest custom motorcycle shows – the BMS (Brasil Motorcycle Show) and the Lucky Friends Rodeo – had to be canceled, and with it, the races for the recently created Brazilian Flat Track League. Or, so we thought.

In an effort to not let the sport lose momentum, the Brazilian Flat Track League, the organizers from BMS, and Lucky Friends Rodeo got together to keep the competition going and fire up the teams and racers with an online event that promises to bring the excitement of the race to the audience’s screens: the “On Track.”

On November 1, 2020, at 1 p.m. (ET/EST), flat track fans worldwide will be able to tune in online and watch “On Track,” the first Brazilian flat track race event to be offered online. Viewers will get a taste of how the sport is creating roots among racers and motorcycle enthusiasts in Brazil.

To broadcast the event, the Brazilian FT League will use the platform http://netshow.me/.

Anybody can sign up to watch the race for free, but numbers are limited, so the organizers recommend the public to sign up as soon as possible using the link https://videos.netshow.me/t/rNl0-BRe9ls/form (there is an English option for singing up at the bottom of the page).

“Everything changed. People are finding new ways to work, to support their favorite restaurants and bars, to be together in general. So why not bring the adrenaline of flat track racing right to the safety of their homes?” says Cezinha Mocelin, founder of BMS Motorcycle. “With an online event, not only are we still making sure the sport keeps growing in Brazil, but we are also guaranteeing the safety of the fans, the racers, and all the team members.”

The “On Track” organizers are following all WHO (World Health Organization) recommendations for the participants of the race: health check booths and Covid-19 tests for racers, team members, and production crew, and lots of masks. The race will happen in Sorocaba, SP – Brazil.

Flat track races are relatively new in Brazil. The category started to gain popular attention in 2016, at the Lucky Friends Rodeo event, and then with the BMS Motorcycle. With more of a roots appeal and an underground vibe, it quickly gathered momentum among the motorcycle community and the custom culture fans.

In 2019, it became an official race class in the country with the creation of the Brazilian Flat Track League and its first season of official competitions. The League has not only pushed the popularity further, with more media coverage, sponsors, sanctioned events but also gave flat track racing legitimacy in Brazil.

By the beginning of 2020, flat track season in Brazil was shaping up to be the greatest yet, starting in March when a group of nine racers and 12 people from Brazil came to the US for the weekend of FlatOutFriday and Mama Tried, in Milwaukee – Wisconsin.

“Even though the event didn’t happen as expected, the time our group had in Milwaukee was crucial for Brazilian flat track. It allowed us to connect even more with other teams and with industry players. We did the best we could under the circumstances at the time, and in the end, we came back to Brazil with a lot accomplished,” says Chrys Miranda, Brazilian racer and one of the founding members of the Brazilian Flat Track League.

One of the most significant announcements once “OnTrack” was confirmed, was the addition of the new Royal Enfield Himalayan 411 Flat Track class to the race; besides the traditional H-D Sportster and the H-D Antique hardtail classes.

The collaboration between BMS and Lucky Friends Rodeo isn’t new. Combining lifestyle, custom culture, attractions like the only Wall of Death in South America, music, art, bike building exhibits, and, of course, races, both events bring together over 20 thousand fans.

“Nothing better than combining our forces to bring to our public and to the fans of Flat Track a new experience. We are preparing a great event, so the audience will be able to feel all the adrenaline from the race straight from their homes”, said Flavio Sieber, founder of Lucky Friends Rodeo.

Presented by: Harley-Davidson do Brasil and Royal Enfield Brasil

WHERE: Races will be broadcast online. Competitions will happen in Sorocaba, SP, Brazil.

View More Motorcycle News
"Everything changed. People are finding new ways to work, to support their favorite restaurants and bars, to be together in general. So why not bring the adrenaline of flat track racing right to the safety of their homes?" says Cezinha Mocelin, founder of BMS Motorcycle.

The Brazilian Flat Track League is helping to advance awareness of Brazilian motorcycle racing, including women racers; for events in the U.S. and beyond. The League is involved in numerous events including FlatOutFriday.

LEGAL NOTICE AND TERMS OF USE: The content of the above press release was provided by the “news source” Brazilian Flat Track League or authorized agency, who is solely responsible for its accuracy. Send2Press® is the originating wire service for this story and content is Copr. © Brazilian Flat Track League with newswire version Copr. © 2020 Send2Press (a service of Neotrope). All trademarks acknowledged. Information is believed accurate, as provided by news source or authorized agency, however is not guaranteed, and you assume all risk for use of any information found herein/hereupon.