"We're excited about the opportunity to partner with the Cabin Kings on this project," Domenic Mangano, owner, Jamaica Cottage Shop, says. "And, while it's not the first show we have appeared on, it's the first one with the National Geographic network."

“Building Wild” is hosted by Paulie DiMeo and Pat “Tuffy” Bakaitis, affectionately known as the Cabin Kings, who take the concept of building man caves to places no man has gone before.

Jamaica Cottage Shop will supply them with a cabin kit that has traditional mortise and tenon joinery making the post and beam house plan extremely durable.

The sugar shack is based on the design of a traditional New England cabin that is still used today to boil maple syrup. It can be used as a working sugar house, workshop and even a man cave. The Cabin Kings will showcase how it can meet multiple needs.
.
“We’re excited about the opportunity to partner with the Cabin Kings on this project,” Domenic Mangano, owner, Jamaica Cottage Shop, says. “And, while it’s not the first show we have appeared on, it’s the first one with the National Geographic network.”

Other shows that Jamaica Cottage Shop have appeared on include the FYI Network for “Tiny House Nation” and the DIY Network. “Building Wild” will be their third reality TV appearance.

For a full schedule of the “Building Wild” series: http://channel.nationalgeographic.com/building-wild/.

About Jamaica Cottage Shop, Inc.:
In business for 20 years, The “Jamaica Cottage Shop” name derives from the tiny New England town of Jamaica, Vermont where the company had its humble beginnings in 1995. Today, the company is based in Londonderry and produces a full line of outdoor storage shed kits, tiny houses, outhouses and green living cabins. Hand-crafted by Vermont artisans, these buildings are as durable as they are attractive and are built in the post and beam tradition. 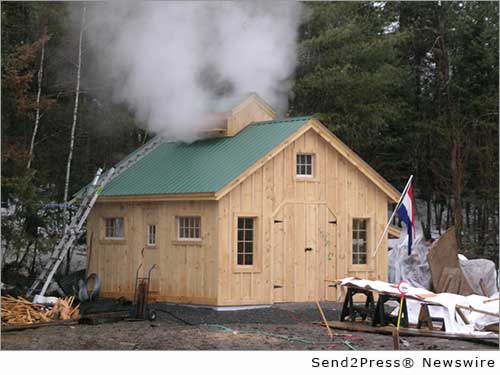 NEWS ARCHIVE NOTE: this archival news content, issued by the news source via Send2Press Newswire, was originally located in the Send2Press® 2004-2015 2.0 news platform and has been permanently converted/moved (and redirected) into our 3.0 platform. Also note the story “reads” counter (bottom of page) does not include any data prior to Oct. 30, 2016. This press release was originally published/issued: Tue, 17 Mar 2015 08:00:03 +0000

View More Building Products News
"We're excited about the opportunity to partner with the Cabin Kings on this project," Domenic Mangano, owner, Jamaica Cottage Shop, says. "And, while it's not the first show we have appeared on, it's the first one with the National Geographic network."

LEGAL NOTICE AND TERMS OF USE: The content of the above press release was provided by the “news source” Jamaica Cottage Shop, Inc. or authorized agency, who is solely responsible for its accuracy. Send2Press® is the originating wire service for this story and content is Copr. © Jamaica Cottage Shop, Inc. with newswire version Copr. © 2015 Send2Press (a service of Neotrope). All trademarks acknowledged. Information is believed accurate, as provided by news source or authorized agency, however is not guaranteed, and you assume all risk for use of any information found herein/hereupon.