CHICAGO, Ill. and CALGARY, Alberta, June 24, 2021 (SEND2PRESS NEWSWIRE) — Sandra LA Boszko is quickly building a name for herself as an author who’s edgy and honest. That’s why her new book, “Welcome to California: From LA County Jail to #1 in Sales” (ISBN: 978-1525546440) was named one of the best indie books of 2021 by the Independent Book Publishing Professionals Group. It recounts how her mental illness led to a wrongful and traumatic incarceration in the Los Angeles County jail system. 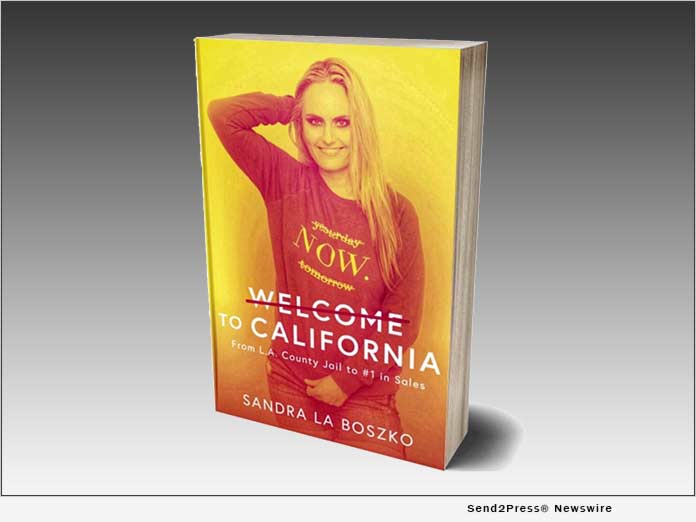 The book is humorous and heartbreaking all at once. It traces how she traveled from her home in Canada to the hills of Hollywood to pursue a career in acting/stunts and recounts how bipolar disorder repeatedly sent her packing from Los Angeles. After failed attempts to develop this dream, she finds herself in a prison system that ignores protocol for inmates with mental illness.

“The whole experience was horrific,” she says. “Writing this book was cathartic and helped with the overwhelming anxiety and PTSD that resulted from this damaging ordeal. I never had that before.”

For example, a 5150 is a section of the California Welfare and Institution Code (Thomson Reuters, 2017) that authorizes a mental health practitioner or an officer to involuntarily confine an individual suspected to have a mental disorder who is gravely disabled, a danger to themselves, or a danger to others. The individual can be brought into custody for up to 72 hours for assessment or placed into a treatment facility.

“Unfortunately, I didn’t receive a 5150 even though the arresting officer knew I was mentally ill,” Boszko explains. “Celebrities such as Amanda Bynes, Britney Spears, Mischa Barton and Kanye West have all received a 5150.”

Sandra’s incarceration lasted 10 days while her family struggled to locate her and to convince the courts that she was in need of medical care. During that time, she experienced abusive guards, isolation and neglect.

And according to L.A. County Jail stats, she’s not alone. The County of Los Angeles reports that 70 percent of the inmate population has a serious medical or mental illness upon initial assessment and at least 30 percent of its inmates have a mental illness.

“This experience left me deeply traumatized and I knew I had to share this story with others. During the writing process, I began to heal,” she says. “I want people to understand mental illness from the inside out and to help the stigma go away. I truly hope this memoir helps others to realize that they are not alone in their struggles.”

The winners and finalists will be honored on June 25, 2021 in an online event which will stream live on Facebook at https://www.facebook.com/NextGenerationIndieBookAwards at 7 p.m. ET and 4 p.m. PT.

The Next Generation Indie Book Awards are judged by leaders of the indie book publishing industry, including many with long careers at major publishing houses.

Sandra currently works as a full-time Territory Manager for a multinational company. She enjoys facilitating presentations and has been a facilitator for a bipolar group in Calgary. She’s active in Toastmasters and has placed first at two of its 2019 competitions. She has a Bachelor of Science in Nutrition from the University of Manitoba and a black belt in Taekwondo. She lives in Calgary. Alberta. This is her first book.

For more information about the book and the author: https://sandralaboszko.com/

Caption: “Welcome to California: From LA County Jail to #1 in Sales” by Sandra LA Boszko.

View More Books and Publishing News
Writing this book was cathartic and helped with the overwhelming anxiety and PTSD that resulted from this damaging ordeal. I never had that before," says Sandra LA Boszko.

Author Sandra LA Boszko currently works as a full-time Territory Manager for a multinational company. She enjoys facilitating presentations and has been a facilitator for a bipolar group in Calgary. She's active in Toastmasters and has placed first at two of its 2019 competitions. She has a Bachelor of Science in Nutrition from the University of Manitoba and a black belt in Taekwondo. She lives in Calgary. Alberta.

LEGAL NOTICE AND TERMS OF USE: The content of the above press release was provided by the “news source” Sandra LA Boszko or authorized agency, who is solely responsible for its accuracy. Send2Press® is the originating wire service for this story and content is Copr. © Sandra LA Boszko with newswire version Copr. © 2021 Send2Press (a service of Neotrope). All trademarks acknowledged. Information is believed accurate, as provided by news source or authorized agency, however is not guaranteed, and you assume all risk for use of any information found herein/hereupon.