SAN CLEMENTE, Calif., Feb. 12, 2020 (SEND2PRESS NEWSWIRE) — Casa Romantica Cultural Center and Gardens, an award-winning southern California 501(c)(3) nonprofit, celebrated the opening of its new exhibit on display at John Wayne Airport on Saturday, February 8. “Our hope is that the 6 million people traveling through John Wayne Airport during the next several months will see the images in the exhibit and be encouraged to visit Casa Romantica in San Clemente,” said Amy Behrens, Executive Director. “It is the convergence of art and place that makes Casa Romantica so unique.” 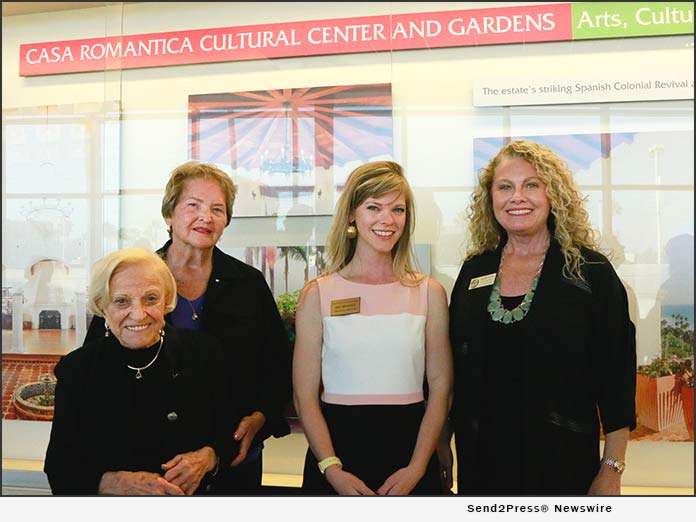 The exhibit is located on the upper level of the Thomas F. Riley Terminal in the walkway between Terminal-B and Terminal-C, before security screening, and is visible to anyone traveling through the Airport through June 2020.

Casa Romantica past Executive Director Berenika Palys secured the exhibition for the institution. Palys, Behrens, and Board President Ruth DeNault presided over a private dedication ceremony with local officials on February 8 at the airport.

The exhibit features Casa Romantica’s commissioned works and site-specific adaptations in the visual and performing arts that highlight its location perched atop a bluff overlooking the Pacific Ocean, as well as its arts education programs for children and adults, at the historic Spanish Colonial Revival estate of San Clemente’s City founder Ole Hanson.

Built in 1927, the Ole Hanson home, its gallery and 2.5 acres of botanical gardens are open to the public daily for self-guided or docent-led tours as well as private events. Visitors to Casa Romantica can enjoy wide-ranging cultural programming, including music, art, dance, theater, horticulture, and lecture series that bring international talent to south Orange County.

View More NonProfit and Charities News
"It is the convergence of art and place that makes Casa Romantica so unique," said Amy Behrens, Executive Director.

ABOUT THE NEWS SOURCE:
Casa Romantica Cultural Center and Gardens

Casa Romantica’s bluff-top campus is the former home of Ole Hanson, the founder of San Clemente. Our historic landmark is open daily for self-guided and docent-led tours of the home, permanent exhibits, and 2.5 acres of lush coastal gardens. Casa Romantica Cultural Center and Gardens is an award-winning southern California 501(c)(3) nonprofit.

LEGAL NOTICE AND TERMS OF USE: The content of the above press release was provided by the “news source” Casa Romantica Cultural Center and Gardens or authorized agency, who is solely responsible for its accuracy. Send2Press® is the originating wire service for this story and content is Copr. © Casa Romantica Cultural Center and Gardens with newswire version Copr. © 2020 Send2Press (a service of Neotrope). All trademarks acknowledged. Information is believed accurate, as provided by news source or authorized agency, however is not guaranteed, and you assume all risk for use of any information found herein/hereupon.