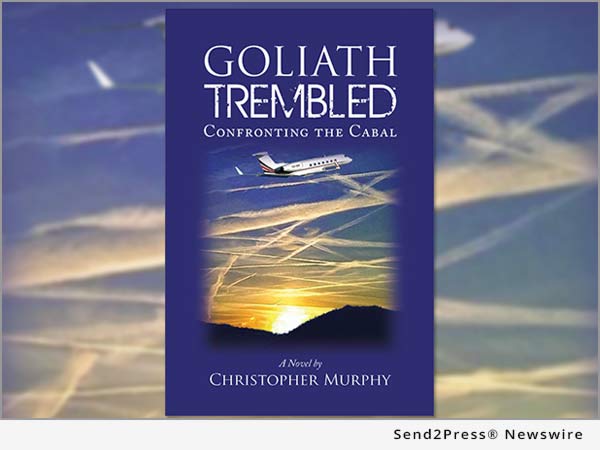 There are revelations in this story that are both factual and alarming. If one believes the “official” versions of the stories surrounding the JFK assassination, 9/11, Flight 800, Chemtrails, and the like, Murphy suggests the reader pause and take a closer look.

“The evidence is out there, extensive, damning and proven, but not of course in the mainstream media,” Murphy says.

All at once, Murphy describes his novel as “controversial, exciting, romantic, sensual and spiritual.”

“It’s airborne and it reveals how the world has been dominated by a secret tyranny for the last two hundred years,” he says.

Terra Pressler, J.D., Ph.D., author of “Creative Juice: 8 Weeks to Authentic Writing” and “Callie’s Turn,” a novel of recovery, says, “Christopher Murphy takes up where Dan Brown left off in the ‘Da Vinci Code’ in taking on the ‘illuminati.’”

So, how are these clandestine rulers of the world confronted? How can his protagonist sabotage the tyrannical intentions of the hyper-rich and influential – the “Corporate Goliath” – the real power behind the thrones?

Under stark CIA surveillance, but in a unique position to supply misinformation, Nic Moncrieffe sets off a chain of possibilities threatening the “powers-that-be.”

Confronting the issue from the outside world poses too many challenges, so with the help of a young woman of pure heart, he examines the situation from the inside. What is ensues is eye opening. A radical upheaval takes place and the weapon of truth is revealed. This story is timely in view of the recent Cabal/Bilderberg meeting in Dresden, Germany. (June 10-13, 2016)

Could the global trigger be in the very air we breathe? Worldwide ignorance of their plans is essential to these overlords, but the startling events in this story point to their undoing and the ultimate triumph of the human spirit.

“Goliath Trembled: Confronting the Cabal” is available in paperback on Amazon for $14.95 and on the Kindle for $3.99.

View More Books and Publishing News
"The evidence is out there, extensive, damning and proven, but not of course in the mainstream media," Murphy says. "It's airborne and it reveals how the world has been dominated by a secret tyranny for the last two hundred years."

ABOUT THE NEWS SOURCE:
Christopher Murphy

Christopher Murphy, born in UK, has been variously a pilot, yachtsman, cabinet-maker, hypnotherapist, sculptor, singer/songwriter, and author of 7 novels, plus a Self-Help book about why Self-Help books don't help! ("How to Startle Yourself"). His latest book is "Goliath Trembled: Confronting the Cabal."

LEGAL NOTICE AND TERMS OF USE: The content of the above press release was provided by the “news source” Christopher Murphy or authorized agency, who is solely responsible for its accuracy. Send2Press® is the originating wire service for this story and content is Copr. © Christopher Murphy with newswire version Copr. © 2016 Send2Press (a service of Neotrope). All trademarks acknowledged. Information is believed accurate, as provided by news source or authorized agency, however is not guaranteed, and you assume all risk for use of any information found herein/hereupon.