Churches of Scientology Promote Community Partnership on National Night Out

LOS ANGELES, Calif., Aug. 5, 2021 (SEND2PRESS NEWSWIRE) — Scientologists across America took a stand against drug abuse and crime August 3 by joining local law enforcement and nonprofit organizations to make National Night Out 2021 special for their communities. National Night Out is an annual community-building campaign that promotes police-community partnerships and raises awareness about crime and drug prevention. The Church of Scientology International has backed this initiative for more than three decades. 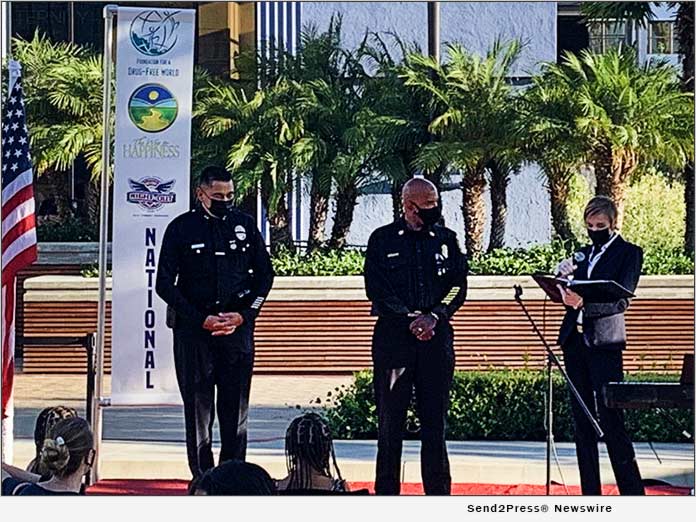 PHOTO CAPTION: Presenting police and firefighters with certificates of appreciation at National Night Out event at the Church of Scientology Los Angeles.

Scientologists took part in events ranging from neighborhood barbecues, live concerts and family fun days hosted by their Church of Scientology to helping organize neighborhood events and providing drug and crime prevention materials to those attending.

“We support this initiative and its purpose of making neighborhoods safer, more caring places to live,” says Fabio Amicarelli, Director of Humanitarian Programs of the Church of Scientology International.

The numbers show a clear relationship between drug use and crime:

Scientology Churches sponsor chapters of Foundation for a Drug-Free World and the Foundation’s award-winning Truth About Drugs initiative. They also provide drug education specialist training and work with local educators, police, churches and nonprofits to reach youth on this vital subject.

And in a direct address to crime, they use The Way to Happiness, the common-sense moral code written by humanitarian and Scientology Founder L. Ron Hubbard. With it, they assist community crime prevention efforts and provide police and correctional officers with tools to help inmates and ex-offenders become ethical and productive members of their communities.

Examples of the use and success of these programs are documented in the original television series Voices for Humanity on the Scientology Network.

Learn more about “The Way to Happiness” at: https://www.thewaytohappiness.org/

*Caption: Presenting police and firefighters with certificates of appreciation at National Night Out event at the Church of Scientology Los Angeles.

Drug Prevention  |  National Night Out  |  The Way to Happiness Foundation

View More Religion and Churches News
"We support this initiative and its purpose of making neighborhoods safer, more caring places to live," says Fabio Amicarelli, Director of Humanitarian Programs of the Church of Scientology International.