DELRAY BEACH, Fla., Nov. 13, 2017 (SEND2PRESS NEWSWIRE) — Currie Sowards Aguila Architects (www.csa-architects.com) is proud to announce they will be designing yet another South Florida bridge. The City of Pompano Beach has tapped the Delray Beach firm to transform the Atlantic Boulevard Bridge. The architects received international acclaim for their design of the nearby Pompano Beach Pier Parking Garage. The new bridge will echo this structure’s style. 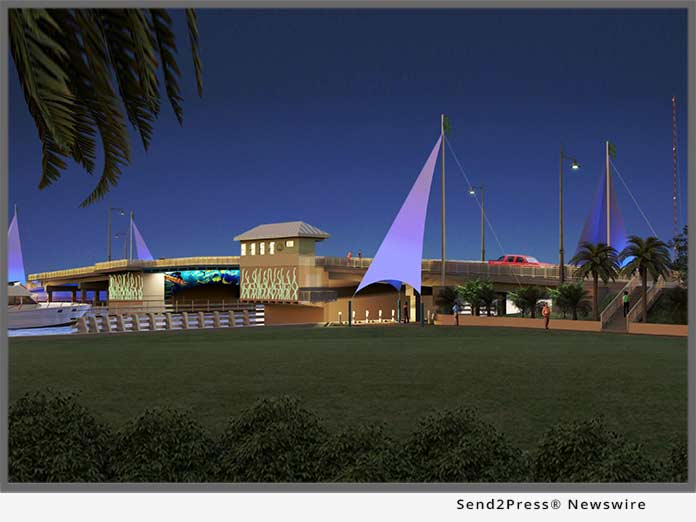 The bridge and surrounding streetscape will be built in partnership with Burkhardt Construction at an approximate cost of $1.5 million. The groundbreaking ceremony will take place on December 11, 2017.

“We are honored to be designing another important structure for the City of Pompano Beach,” said CSA’s partner, Jess Sowards. “The east side transformation of this city has been remarkable thanks to the City and the CRA’s strategic redevelopment plans. Their understanding that parking garages and bridges are symbols of the city, not just functioning structures, has set the style for the type of businesses, hotels and developments that now want to be part of this growing community.”

The Atlantic Boulevard Bridge will display a playful design concept which incorporates sail-like components and a marine-themed mural at the bridge tender house base.

“When people see the bridge, they will probably assume we were influenced by the sail-like components and art work of our garage design, however, we actually designed the bridge first,” explained Sowards. “We knew these two structures needed to have a cohesive style, but we created each with its own personality. This area will truly be a gateway to the city, and we thrilled that our designs will be welcoming residents and visitors alike for decades to come.”

Currie Sowards Aguila Architects is one of the leading bridge designers in Florida, with a stellar array of projects in their portfolio.

The Ocean Avenue Bridge in Boynton Beach was a tale of two cities. This whimsical structure connects the City of Boynton Beach and the Town of Ocean Ridge, two very diverse coastal communities. The 21’ structure replaced a dated and substandard bridge crossing the Intracoastal Waterway. Native sea life provides the artistic palette for the bridge’s metal trellis work which serves as the base for spire-like towers emerging from the bascule piers. Separate pedestrian and bicycle access is provided along with illuminated waterfront communal space under the bridge. The bridge served as an integral piece of Boynton Beach’s downtown revitalization.

The Flagler Memorial Bridge, much like the Ocean Avenue Bridge, is the connecting point for the City of West Palm Beach and the Town of Palm Beach, two distinctly different South Florida communities. The bascule bridge serves as the replacement for a 1938 structure and spans 2,400 feet over the Intracoastal Waterway. CSA as a sub consultant to KHA provided services to FDOT for a PD&E study and met with the community to determine location of new bridge, height and the architectural style of the bridge. The team then developed a criteria package for a design build project delivery and assisted FDOT with the selection of the design build team and provided plan review of documents for compliance with the RFP.

The Crosstown Parkway Bridge in Port St. Lucie is the largest and most industrial of the Currie Sowards Aguila bridge designs, and includes an approximately ¾ mile long fixed flyover of a sensitive estuary called the North Fork St. Lucie River. CSA created architectural features at each corner of the approach spans that signify the entrance to the estuary and conveys the community’s value for the natural environment. The inclusion of the commissioned art work by Guy Harvey which features the River’s natural habitat completes the design of the bridge aesthetics.

The versatile practice, known for its distinctive designs, has garnered acclaim for their singular ability to transform once utilitarian facilities into iconic structures for municipalities. From community centers to parking garages, fire stations to bridges, CSA allows design to be experienced in unexpected ways.

Their practice is augmented by the commitment of the partners to community involvement. Bob Currie, Jess Sowards and Jose Aguila have defined their legacy through their philosophy of “giving back by design and service.”

View More Architecture News
"We are honored to be designing another important structure for the City of Pompano Beach," said CSA's partner, Jess Sowards.