LOS ANGELES, Calif., Oct. 18, 2017 (SEND2PRESS NEWSWIRE) — Halloween night just got safer! America’s Real Life Urban Super Hero, DangerMan, will roam the streets trick-or-treating with the likes of Superman, Batman and Spider-Man as the new DangerMan Super Suit is now available for kids! Actor and mentor Roger I. Tinsley, the founder of the DangerMan Urban Superhero brand and CEO/President of the DangerMan Education Foundation, Inc., a non-profit 501(c)(3) organization, has released the new costume just in time for the holidays. 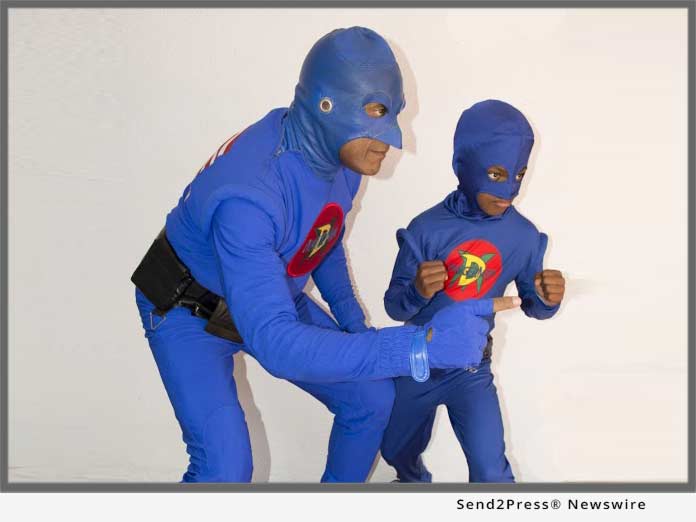 The super suits are available for purchase online at http://dangermanheroawards.com/. More than a Halloween novelty however, the DangerMan Urban Superhero Super Suit is also the perfect holiday and year-round gift, designed to boost self-esteem, confidence and courage in young children.

Tinsley first introduced DangerMan to America in 1998 after being emotionally impacted by the death of a four-year-old tragically killed by a stray bullet on her birthday as a result gang-related gun fire. Tinsley felt compelled to create a real life super hero who could serve as a role model for school age children in underserved communities while addressing issues that specifically affected them. Using his own money and resources he created DangerMan, the Urban Super Hero.

“As a kid who grew up on superheroes, I am beyond thrilled to know that boys and girls can now emulate DangerMan, and everything he stands for, with their very own costume,” cites Tinsley. “In fact, with the growing popularity in mythic figures like Black Panther, it is also interesting to note that this is the first time in American history that there is a super suit costume for kids that represents a ‘real life’ Black super hero.”

As a “real life” urban superhero, DangerMan is an advocate for children’s rights promoting literacy, safety and good health. He wages against bullying and also fights human trafficking. DangerMan visits schools and community events encouraging his audience with a motto of “No gangs, guns, drugs, alcohol or tobacco.”

He has traveled throughout America and Haiti, empowering children to live their best life. “Protect, Promote and Provide” are the pillars DangerMan lives by.

Tinsley credits Marvel comic book legend Stan Lee for a great portion of his inspiration and success. He achieved a career highlight when Lee met and personally congratulated DangerMan on his superhero feats of worldwide motivation.

DangerMan has steadily evolved into the fastest growing real life super hero brand and will celebrate a 20-year anniversary in 2018.

The Second Annual DangerMan Hero Awards Show in slated for December 9, 2017 at the California African American Museum to honor local community heroes and the DangerMan Super Hero newspaper will debut in November. There are also plans for “The DangerMan Chronicles,” a crime series for television.

To purchase a made in America, DangerMan Super Suit costume for a child you love, go to http://dangermanheroawards.com/.

View More Pop Culture News
"As a kid who grew up on superheroes, I am beyond thrilled to know that boys and girls can now emulate DangerMan, and everything he stands for, with their very own costume," cites Tinsley.

LEGAL NOTICE AND TERMS OF USE: The content of the above press release was provided by the “news source” DangerMan Education Foundation, Inc. or authorized agency, who is solely responsible for its accuracy. Send2Press® is the originating wire service for this story and content is Copr. © DangerMan Education Foundation, Inc. with newswire version Copr. © 2017 Send2Press (a service of Neotrope). All trademarks acknowledged. Information is believed accurate, as provided by news source or authorized agency, however is not guaranteed, and you assume all risk for use of any information found herein/hereupon.