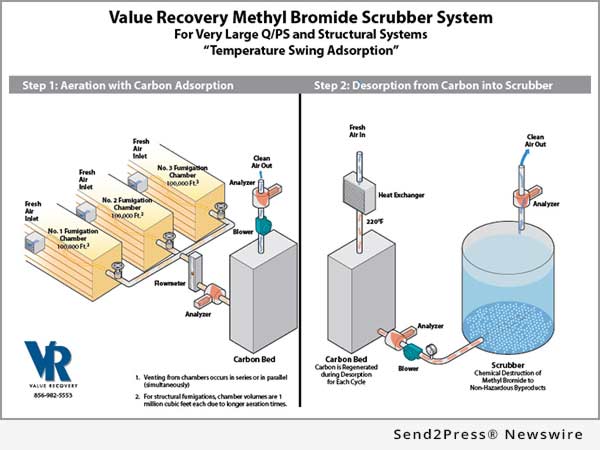 VR’s systems installed in commercial facilities in Florida and California have destroyed over 70,000 lbs. of methyl bromide emissions used in over 1,000 fumigations. The two-stage system uses a thiosulfate scrubber that chemically destroys over 94% of the methyl bromide collected. This destruction efficiency was validated independently via a California state sanctioned source test. VR’s patented process converts this hazardous pollutant into non-hazardous byproducts for easy disposal.

VR has given presentations to Atlantic states where fumigations using large volumes of methyl bromide are vented directly to the atmosphere. The most glaring example that could benefit from emissions controls is the 160,000 lbs/yr being vented at a New Jersey port. Detailed information given to the New Jersey Department of Environmental Protection (NJDEP) on April 4 showed that VR’s systems are technically and economically feasible. From the NJDEPs own requirements, “technical and economic feasibility” is the major criteria needed to require emissions controls. The State of New Jersey and the fumigator are in active discussion on permitting issues.

The Clean Air Act does not list methyl bromide emissions from fumigations as a major source of hazardous air pollutants, even though millions of pounds of it are vented every year. If fumigation were listed as a major source category by the US EPA as required by the Clean Air Act, then there would be Federal enforcement requiring evaluating emissions controls as fumigation permits come up for renewal and most of this direct venting of hazardous air pollution would end.

The National Association of Clean Air Agencies, a consortium of over 40 state air pollution agencies, has declared in their recent letter to the US EPA, that leaving this issue to the states results in an uneven playing field where fumigators can move to more pollution-friendly states thus avoiding emissions controls.

The Montreal Protocol was set up to eliminate ozone destroying chemicals like methyl bromide from reaching the atmosphere. The resultant “ozone hole” is a major concern because of its ability to let UV light from the sun reach us resulting in increased incidences of skin cancer. However, the Montreal Protocol does not require methyl bromide to be phased out for imports and exports. Total worldwide emissions in 2014 for imports and exports was 24 million lbs of methyl bromide of which over 10 million lbs came from the United States (Source: United Nations Ozone Secretariat website).

Says Peter Joyce, President of Value Recovery, “The hole in the Clean Air Act is contributing to the hole in the ozone layer. There is no logical reason that this direct venting of methyl bromide should be allowed to continue.”

View More Environment and Ecology News
Says Peter Joyce, President of Value Recovery, "The hole in the Clean Air Act is contributing to the hole in the ozone layer. There is no logical reason that this direct venting of methyl bromide should be allowed to continue.”

Value Recovery is an engineering services firm that provides solutions to customers desiring large scale, emissions controls of their Quarantine and Pre-shipment fumigation operations. We design, build and start-up custom facilities to control the emissions of methyl bromide emitted from fumigation operations before it reaches the atmosphere and then chemically destroy the methyl bromide with our patented technology before it harms workers, bystanders or the ozone layer.

LEGAL NOTICE AND TERMS OF USE: The content of the above press release was provided by the “news source” Value Recovery, Inc. or authorized agency, who is solely responsible for its accuracy. Send2Press® is the originating wire service for this story and content is Copr. © Value Recovery, Inc. with newswire version Copr. © 2016 Send2Press (a service of Neotrope). All trademarks acknowledged. Information is believed accurate, as provided by news source or authorized agency, however is not guaranteed, and you assume all risk for use of any information found herein/hereupon.