KITTERY, Maine, March 29, 2018 (SEND2PRESS NEWSWIRE) — Maine residents will have an opportunity soon to witness the devastating impacts of federal regulations on the lives of New England ground fishermen, as seen through the eyes of a documentary filmmaker with a long record of acclaimed work. David Wittkower’s “Dead in the Water” will be shown at four Maine community theaters in April. 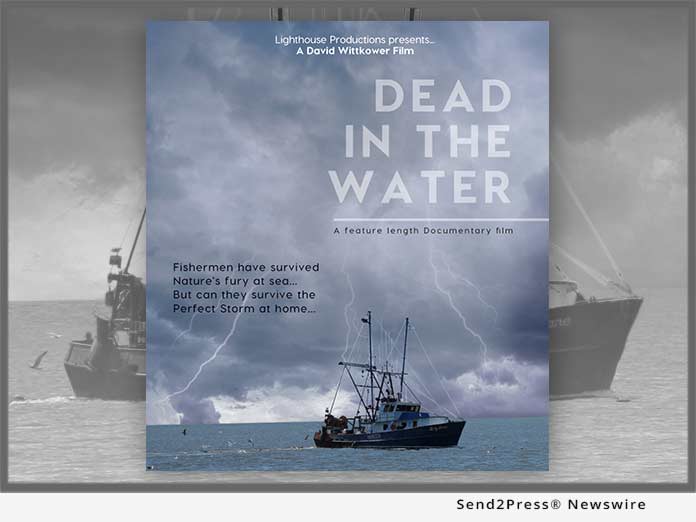 It will be shown at Kittery, Star Theater, Waterville’s Railroad Square, Boothbay Harbor’s The Harbor Theater and Belfast’s The Colonial Theater. The 7 p.m. screenings will be followed by a question period and panel discussion featuring local, New England commercial fishermen and the film makers.

* At each screening, a Q&A will follow immediately after the film, with the filmmaker and fishermen.

The film was shot in New England coastal towns. It features scenes and interviews with area fishermen, their spouses and other family members, advocates for fishermen, elected officials, and community activists.

“This film opens the doors for the world to see how difficult and dangerous the life of a fisherman is,” said John Bell, a former mayor of Gloucester, Massachusetts who advised Wittkower during the project. “On top of that, the impact of misguided federal regulations on fishermen has never been presented as powerfully as it is in ‘Dead in the Water.’ This film packs a real punch. It stays with you long after you’ve seen it.”

On March 18, 2018, “Dead in the Water” received an award for Excellence in Cinematography for a Documentary at the Depth of Field International Film Festival competition. The film also features Grammy Award winning singer, Paula Cole.

Wittkower said he’s hoping now that the film will show the audience what is really happening in this very complicated issue. “What we would like to see out of all this is to have people support commercial fishermen. I’d like to see people demand more fish is caught off of U.S. waters than to get it from Vietnam, Norway and New Zealand, and don’t eat Tilapia.”

Tickets to the April screenings are available by contacting the theaters or at their doors.

More information can be seen on the website: https://www.deadinthewater.info/.

View More Movies and Filmmaking News
"This film opens the doors for the world to see how difficult and dangerous the life of a fisherman is," said John Bell, a former mayor of Gloucester.

ABOUT THE NEWS SOURCE:
David Wittkower

Professional filmmaker David Wittkower, a graduate of the American Film Institute as a cinematographer, is a Rockport, Mass. native who has been living and working in Los Angeles since 1981. He has completed 15 documentary films and won numerous awards.

LEGAL NOTICE AND TERMS OF USE: The content of the above press release was provided by the “news source” David Wittkower or authorized agency, who is solely responsible for its accuracy. Send2Press® is the originating wire service for this story and content is Copr. © David Wittkower with newswire version Copr. © 2018 Send2Press (a service of Neotrope). All trademarks acknowledged. Information is believed accurate, as provided by news source or authorized agency, however is not guaranteed, and you assume all risk for use of any information found herein/hereupon.