SAN ANGELO, Texas, Nov. 22, 2016 (SEND2PRESS NEWSWIRE) –- No matter party affiliation, everyone can agree that this year’s elections were heart-pumping. And for Donald Eugene Lowe, it might have even been a bit more so. Why? To date, he says that he is the first person in history to become a President-Elect Alternate. It’s the law – a combination of many, in fact. 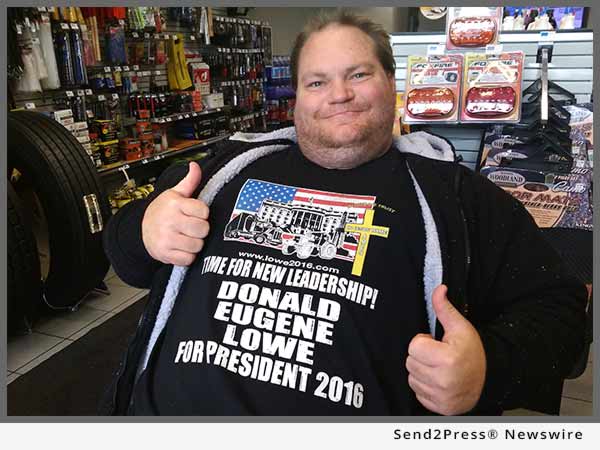 “I know many will be confused by this, but it’s true. It’s still possible to stop President-Elect Trump from taking office,” Lowe says. “We both share the Republican presidential electors and this means that the Electoral College could still pick me.”

He says it’s possible due to a series of legal loopholes.

“When the other candidates withdrew, I announced I was running under the Republican Party. Next, I announced that I was challenging President-Elect Donald Trump and then I said I was skipping the general election and pushing onwards to the Electoral College,” he explains.

Lowe says that since the Republican Party never let him have his brokered convention with Donald Trump, they inadvertently made the loopholes within the laws come true for the first time in history. As a result, he says that he is now in the Electoral College as President-Elect Alternate.

“I know almost everyone will be confused because I am doing something that’s never been done before, but it could work,” he says.

If the Electoral College picked Lowe instead this could cause no one to have 270 electors and would force the constitution to work. Lowe would be the first person to become president using the laws to make it happen instead of traditional process.

“If I become president it’s because of the laws of the states and the constitution,” he says.

View More Elections and Politics News
"I know many will be confused by this, but it's true. It's still possible to stop President-Elect Trump from taking office," Lowe says. "We both share the Republican presidential electors and this means that the Electoral College could still pick me."