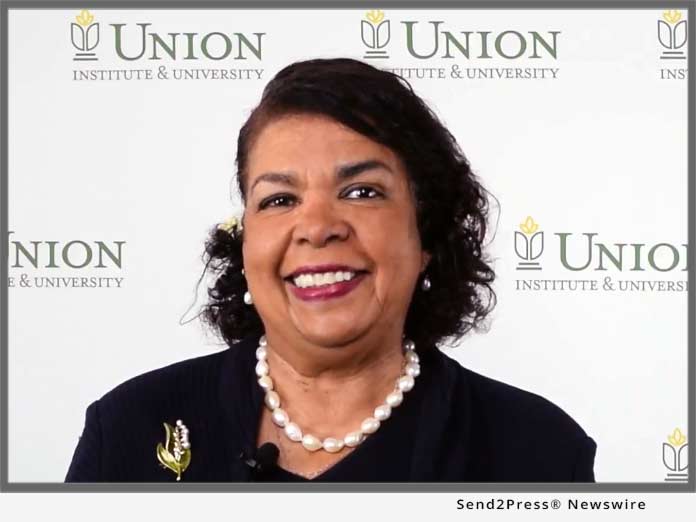 Dr. Webb is a visionary leader with a passion for community and mentoring women in leadership, having dedicated her career to the equity of access to educational excellence in the United States, as well as around the world. She brings more than 20 years of executive leadership and an impressive career in higher education, most recently as the Midwest campus president and senior advisor for Academic Innovation to the Chancellor at the Antioch University System.

She also served as provost and vice president for Academic Affairs at Antioch University Midwest Campus. Prior to her work at Antioch University, Webb served at Alliant International University System from 2000 to 2013, where she was founding university dean of the California School of Education, overseeing programs in California, Mexico, and the Far East, as well as online programs. She was also associate provost for Community Engagement at Alliant from 2009 to 2013.

Dr. Webb served as dean of the College of Education (Baton Rouge) at Southern University and A&M College System: Baton Rouge, New Orleans, Shreveport (Community College), and online from 1998-2000. She co-founded and co-directed the Center for the Study of Academic Achievement in Learning Environments, part of a Stanford University Complex Instruction Institute Consortium, University of Kentucky System: Lexington from 1994-1998. Fluent in Spanish, she was also program director, Language Education Programs, at the University of Kentucky from 1992-1998. Earlier in her career, she served at Howard University in Washington, D.C., Indiana University, Bloomington, and Coppin State University in Maryland.

Dr. Webb was appointed chair-elect of the American Council on Education’s Women’s Network Executive Council (WNEC), Washington, D.C. in 2014, and becomes chair of the Executive Council in July. She also served on the ACE Northern California Women’s Network for more than 10 years and held both vice chair and chair positions there. She has earned numerous awards, including Teacher of the Year by the California School of Education doctoral students at Alliant International University, and was selected in 2016 as one of the Top 25 Women in Higher Education and Beyond by Diverse Issues In Higher Education Magazine, honoring her commitment to and advocacy for diversity, inclusion, and mentoring. Dayton Magazine profiled her for their leadership series. She serves on the Advisory Board of William V. S. Tubman University Foundation in Harper, Liberia, and is a member of the Board of Directors for the Dayton Contemporary Dance Company.

Dr. Webb has a successful record of fundraising and building relationships and partnerships throughout her career. She served on accrediting peer visit committees for the Western Association of Schools and Colleges and the Southern Association of Colleges and Schools, as well as holding numerous committee leadership positions throughout her career.

Dr. Webb has been a leader in her fields of study and has spoken at conferences nationally and internationally. She has published numerous articles in the areas of urban education, sociolinguistics, and language learning. Dr. Webb’s career has been one of service at complex systems, and primarily at institutions serving adults returning to higher education and emphasizing experiential learning-based instruction. She also served at universities that were founded to provide equity of access to higher education for students of color. At Antioch University, she and her leadership team initiated programs that grew undergraduate and master’s degree programs.

Dr. Webb and her husband, Wallace H. Webb, Jr., a retired educator, are the proud parents of two children, Ramona and Wallace, III.

Dr. Webb said, “I am humbled and honored to have been selected as the sixth President of Union Institute & University—a university living its mission to engage, enlighten, and empower students to achieve a lifetime of learning and service.”

“Indeed, it is a privilege to follow Dr. Sublett, whose leadership has provided Union with a firm foundation, as well as a reputation for commitment to excellence, innovation, and community outreach. I look forward to joining the partnership reflected by the exceptional Union community of students, faculty, staff, alumni, and Board of Trustees to continue Union’s distinguished social justice legacy as a world-class university.”

Ms. Christine van Duelmen, chair of Union Institute & University’s Board of Trustees, said, “On behalf of the Board of Trustees of Union Institute and University, I am very pleased to welcome Dr. Karen Schuster Webb as Union’s sixth president. The search committee, consisting of trustees, administrators, faculty and alumni, spent more than a year evaluating and rating potential candidates. A very thorough national search was guided by a distinguished national firm. All Union stakeholders had the opportunity to meet the finalists and provide their feedback.”

“At the January 2018 Board of Trustees meeting, the trustees carefully considered the qualifications of the three finalists and after much deliberation, they voted unanimously to offer the presidency to Dr. Webb,” Trustee van Duelmen continued.

“Dr. Webb is ideally suited to serve as Union’s next president, particularly following the exemplary leadership of Dr. Roger Sublett. I know she will create new opportunities for students, faculty, and staff and build upon our partnerships with area businesses and the local communities we serve,” said van Duelmen. “Dr. Webb has the background and experience to lead our university forward, in her words ‘to a more perfect Union,’ and has shown us her commitment to and passion for Union’s mission and values: to engage, enlighten and empower individuals to pursue professional goals and a lifetime of learning, service, and social responsibility.”

“On behalf of the entire Union community across the nation,” van Duelmen continued, “we are so pleased that Dr. Webb has both the vision and capacity to lead Union Institute & University, one of the most important universities of its kind in the world.”

In April 2017, Dr. Sublett, Union’s fifth president, informed the trustees and community of his plans to retire on June 30, 2018 after 17 years of leadership and a career serving higher education spanning five decades. Dr. Sublett said of Dr. Webb’s appointment, “Dr. Webb is an accomplished professional with a strong commitment to social justice, social responsibility, and community connectedness in higher education. She has served with distinction in institutions most recently in California and Ohio. She is a national leader particularly in support of women in higher education through her work with the American Council on Education in Washington, D.C. Having worked with Dr. Webb over the years, I know she understands Union’s history and commitment to serving adult learners. She is and has been a strong advocate for the mission of Union and other like institutions. She is a scholar, a seasoned administrator, a respected colleague in higher education across the nation. All of us who have been involved in the life of Union welcome Dr. Webb to the presidency of Union with enthusiasm, and wish for her and Union only the very best in the coming years. Union is most fortunate to have attracted such a talented leader.”

Trustee van Duelmen praised Dr. Sublett on his service and tenure. “Dr. Sublett has provided incomparable leadership through a period of both challenges and academic growth. The entire Union community is grateful for his years of dedicated service and his commitment to higher education. Throughout his 17-year tenure, Dr. Sublett has been a beacon of service and leadership. It was in that spirit that the trustees bestowed upon him the Presidential Medal of Exemplary Leadership last October. We look forward to celebrating his stellar career later this spring.”

A Board-appointed transition committee will assist Dr. Sublett and President Elect Webb in the coming months. She will take office on July 1, 2018.

Union Institute & University is a non-profit, regionally accredited university specializing in providing quality higher education degrees for adults nationwide. Founded in 1964, Union’s academic programs and services are the result of more than five decades of identifying and refining ways to structure and deliver education to meet the needs of adults. Distinguished as the pioneer in adult education, Union perfected the concepts now common in higher education such as the hybrid model, a blend of online and traditional classroom instruction, interdisciplinary studies, and student centered education with socially relevant and applicable learning outcomes in its undergraduate, master’s and doctoral degree programs.

The university is guided by its core mission to educate highly motivated adults who seek academic programs to engage, enlighten, and empower them to pursue professional goals and a lifetime of learning, service, and social responsibility.

Union is a national university with academic centers located in: Ohio, Florida, and California.

View More Education and Schools News
"I am humbled and honored to have been selected as the sixth President of Union Institute & University-a university living its mission to engage, enlighten, and empower students to achieve a lifetime of learning and service," said Dr. Webb.

More from Union Institute and University

ABOUT THE NEWS SOURCE:
Union Institute and University

Union Institute & University is a non-profit, regionally accredited university specializing in providing quality higher education degrees for adults nationwide. Founded in 1964, Union’s academic programs and services are the result of more than five decades of identifying and refining ways to structure and deliver education to meet the needs of adults.

LEGAL NOTICE AND TERMS OF USE: The content of the above press release was provided by the “news source” Union Institute and University or authorized agency, who is solely responsible for its accuracy. Send2Press® is the originating wire service for this story and content is Copr. © Union Institute and University with newswire version Copr. © 2018 Send2Press (a service of Neotrope). All trademarks acknowledged. Information is believed accurate, as provided by news source or authorized agency, however is not guaranteed, and you assume all risk for use of any information found herein/hereupon.