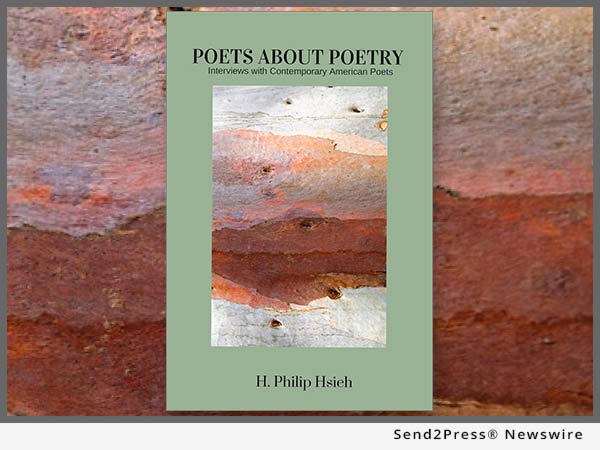 The author, H. Philip Hsieh, is the editor-in-chief of a new poetry journal “Nourish-poetry & haiku” (www.nourish.com). He is also a member of the editorial committee of New World Poetry Bimonthly in the U.S., and has published two poetry-related books. Also an accomplished Chinese calligrapher, Dr. Hsieh extensively explores the interplay between poetry and calligraphy in his work.

“Poets About Poetry” is an exceptional volume for both poets and poetry readers alike. H. Philip Hsieh’s new book explores the art and craft of poetry from the viewpoint of 14 distinguished poets.

These poets vary in their backgrounds and in the ethnic groups they come from; they speak a rich mosaic of American experiences in the twenty first century.

These conversations provide insightful wisdom on a wide range of topics including haiku, poetry with music and dance, the Beat Movement, minority experiences, poetry slam, the use of metaphors, challenges in translating poetry, inspiring poets or mentors, the use of memory in poetry and various other issues related to the writing process.

INTERVIEWED POETS IN THE BOOK INCLUDE:

Maxine Kumin’s poetry won her many awards including American Academy & Institute of Arts & Letters Award & the Pulitzer Prize in Poetry in 1973. She was appointed the Poet Laureate of the United States 1981.

Jerry Ball writes poems both in the metered format and in free verse, including more than ten published books of poetry and haiku.

Dr. William W. Marr is regarded as one of the leading contemporary Chinese-language poets, and served as the President of the Illinois State Poetry Society in 1993-1995. He has published four poetry collections in English.

Dr. Roald Hoffmann, one of the two winners of the 1981 Nobel Prize in Chemistry, is the Frank H.T. Rhodes Professor of Humane Letters Emeritus, and has published six poetry collections.

Ted Kooser was the Poet Laureate of the United States from 2004 to 2006, and has published twelve collections of poetry, and was awarded the 2005 Pulitzer Prize in Poetry.

Nikki Giovanni has written close to twenty volumes of poetry, and is the recipient of over twenty honorary doctorates and numerous awards.

Mr. Juan Felipe Herrera was elected a Chancellor of the Academy of American Poets and appointed to be Poet Laureate of California. In both 2015 and 2016, he was named Poet Laureate of the United States.

Christopher Herold, together with Alex Benedict, founded The Heron’s Nest and served as its 1st editor-in-chief. The magazine has become one of the leading English haiku magazines. He has published six volumes of haiku selections.

Joy Harjo has published fifteen poetry collections. The Wallace Stevens Award is among the many awards she received in Poetry.

Naomi Shahib Nye has published ten poetry collections. She has received four Pushcart Prizes and the Paterson Poetry Prize. In 2009, she was elected a Chancellor of the Academy of American Poets.

Rita Dove was appointed Poet Laureate of the United States in 1993 and 1994. She was also awarded the Pulitzer Prize for Poetry in 1987 and received the National Medal of Arts in 2011. She was elected a Chancellor of the Academy of American Poets in 2006 and is an advisory editor to many literary periodicals.

Jane Hirshfield has written nine collections of poetry. Her honors include The Poetry Center Book Award. She was elected a Chancellor of the Academy of American Poets in 2012.

Li-Young Lee is the author of four poetry collections, and has received such honors as the William Carlos Williams Award, Lamont Poetry Selection, and Lannan Literary Award.

ABOUT THE NEWS SOURCE:
EGW Publishing

EGW Publishing (since 1979), is celebrating its 38th year of publishing in 2017. EGW currently publishes three magazines, "Herb Quarterly," "Nourish-poetry & haiku" and "Nourish-children's poetry" (both coming in 2017). EGW also recently published 13 poetry books and 1 book of interviews with contemporary American poets. EGW previously published 10 printed consumer magazines with a combined paid subscriber base of over one million. They were distributed in over 20,000 stores and newsstands, and to over 20 countries.

LEGAL NOTICE AND TERMS OF USE: The content of the above press release was provided by the “news source” EGW Publishing or authorized agency, who is solely responsible for its accuracy. Send2Press® is the originating wire service for this story and content is Copr. © EGW Publishing with newswire version Copr. © 2017 Send2Press (a service of Neotrope). All trademarks acknowledged. Information is believed accurate, as provided by news source or authorized agency, however is not guaranteed, and you assume all risk for use of any information found herein/hereupon.