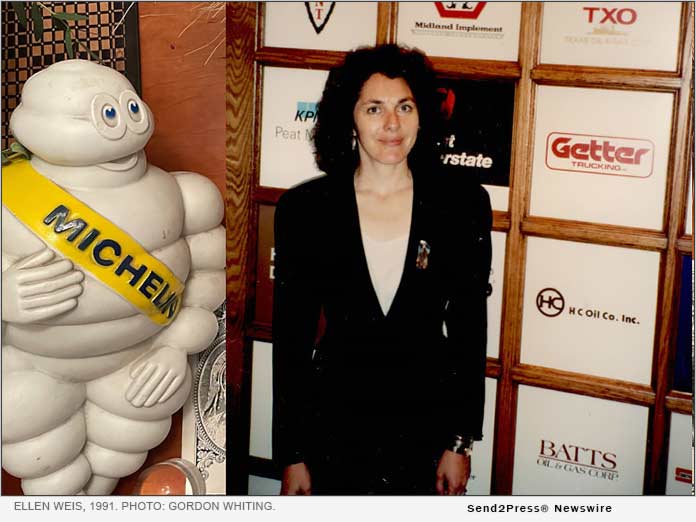 Born in Trenton, New Jersey, on May 14, 1957, Weis was raised in Elkins Park, Pennsylvania, where she attended public schools. Her father was a product engineer. Her mother was a community college librarian.

Enrolling at the University of Iowa in 1975 to study writing, she quickly fell in with a group of intellectuals known as the Actualists, led by poet Anselm Hollo and small press publisher Allan Kornblum. Mentored by writer Jayne Anne Phillips, she published her first short fiction in North American Review.

In 1982 Weis moved to San Francisco where she founded the Museum of Modern Mythology with Matthew Cohen and Jeff Errick. The museum featured a collection of American advertising characters such as Mr. Clean and Jolly Green Giant, presented in a way to show their relation to mythic images and archetypes. The small museum quickly found wide acclaim, with feature stories in the Los Angeles Times, Wall Street Journal, People and the New York Times. Prominent mythologist Joseph Campbell, film historian Leonard Maltin, and marketing historian Trudy Kehret-Ward served on the board.

“Ellen sensed there was more than nostalgia at work in people’s response to these images,” said Gordon Whiting, Weis’s husband. “They seemed familiar on a deep level, part of an ongoing story.”

She later continued her writing pursuits, joining the Squaw Valley Community of Writers, where she studied with James D. Houston and Al Young. Her book “Berkeley: the Life and Spirit of a Remarkable Town” was published in 2004. For the past ten years she served as director of advertising for Bay Nature magazine.

After collapsing in January in the kitchen of her home in Altadena, California, tests revealed the presence of the glioblastoma multiforme, a form of brain cancer. Despite aggressive treatment, her condition deteriorated. She died at home in Altadena on July 27, 2021, in the arms of husband Gordon and son Benjamin. She is survived by them, and by her mother Aimee L. Weis, sister Margaret Chase, both of Ann Arbor, Michigan, and brother Fred Weis, of Arcata, California.

An agreement was reached last month putting the Museum of Modern Mythology’s complete archive, some 3000 objects and manuscripts, into the collection of the Valley Relics Museum, Van Nuys, California, for continuing study and display.

View More General Editorial News
"Ellen sensed there was more than nostalgia at work in people's response to these images," said Gordon Whiting, Weis's husband. "They seemed familiar on a deep level, part of an ongoing story."

ABOUT THE NEWS SOURCE:
Gordon Whiting

LEGAL NOTICE AND TERMS OF USE: The content of the above press release was provided by the “news source” Gordon Whiting or authorized agency, who is solely responsible for its accuracy. Send2Press® is the originating wire service for this story and content is Copr. © Gordon Whiting with newswire version Copr. © 2021 Send2Press (a service of Neotrope). All trademarks acknowledged. Information is believed accurate, as provided by news source or authorized agency, however is not guaranteed, and you assume all risk for use of any information found herein/hereupon.