"It can help its users in a number of ways," Gojcaj says. "It deters bullies and cyberstalkers and can detect if a product is a fake or not. Basically, if it looks too good to be true, it likely is."

DETROIT, Mich., Feb. 2, 2016 (SEND2PRESS NEWSWIRE) — The RuReal App released by U.S. Publications, Inc. is designed to help its users avoid scams, posers and more. Not sure if that dating profile image is real? Unsure of the authenticity of a product being sold online? RuReal sets the truth free.

The RuReal™ App scans 14 billion images on the Internet while millions are being added daily. If an image has been used elsewhere or altered, this app reveals where it’s been used, along with its origination.

“It can help its users in a number of ways,” Gojcaj says. “It deters bullies and cyberstalkers and can detect if a product is a fake or not. Basically, if it looks too good to be true, it likely is.”

For example, Gojcaj tested the app out on a photo of a 2004 Mercedes Benz that was posted on CraigsList. It looked like it was in excellent condition and the price was unreal. It turns out the car was unreal too as RuReal immediately recognized it as a fake. The image had been cropped and altered and had originated from another site.

So, how does it work? Users browse one or multiple images and then save them to their mobile device. Next, they open the RuReal app and search from their saved images. The app does the rest and results are immediate.

RuReal will show true results unless the images are original and not used elsewhere.

It’s also a good way for people to see if, where and how their images are being used.

Available on iTunes and GooglePlay, it’s compatible with iPhones, iPads and Android devices. The first 20 searches are free. To date, customers have rated it a five-star app. 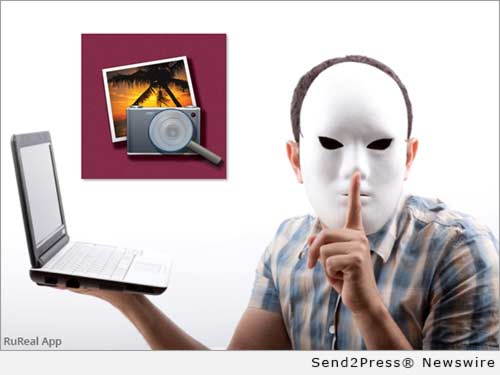 NEWS ARCHIVE NOTE: this archival news content, issued by the news source via Send2Press Newswire, was originally located in the Send2Press® 2004-2015 2.0 news platform and has been permanently converted/moved (and redirected) into our 3.0 platform. Also note the story “reads” counter (bottom of page) does not include any data prior to Oct. 30, 2016. This press release was originally published/issued: Tue, 02 Feb 2016 13:28:15 +0000

View More Apple Mac and iOS News
"It can help its users in a number of ways," Gojcaj says. "It deters bullies and cyberstalkers and can detect if a product is a fake or not. Basically, if it looks too good to be true, it likely is."

LEGAL NOTICE AND TERMS OF USE: The content of the above press release was provided by the “news source” U.S. Publications Inc. or authorized agency, who is solely responsible for its accuracy. Send2Press® is the originating wire service for this story and content is Copr. © U.S. Publications Inc. with newswire version Copr. © 2016 Send2Press (a service of Neotrope). All trademarks acknowledged. Information is believed accurate, as provided by news source or authorized agency, however is not guaranteed, and you assume all risk for use of any information found herein/hereupon.