PINE ISLAND, Fla., May 15, 2020 (SEND2PRESS NEWSWIRE) — The Family of Juan Manuel Torres announced today that Dr. Juan Manuel Torres of Pine Island, Fla.—a decorated Korean and Vietnam veteran and beloved father, grandfather, and friend to many—passed away this week at the age of 86-years-old after a courageous battle with cancer and pneumonia.

Dr. Torres, who earned a PhD later in life, was a true patriot and American hero. Born in Arecibo, P.R. and raised in the Bronx, N.Y., he joined the U.S. Army in 1949 at the young age of fifteen by “revising” his birth certificate. After enlisting in the U.S. Army, Dr. Torres was immediately deployed to Korea where he was assigned to the 21st Regiment of the 24th Infantry Division (Task Force Smith) and placed directly into combat against aggressing North Korean and Chinese (“the Reds”) troops. Outnumbered five to one, his unit suffered heavy casualties over many months of sustained fighting.

During a battle where he was assigned to hold back the advancing Reds while his squad moved to another location, he was captured and beaten, yet later escaped while being marched to a prisoner detention facility. After Dr. Torres’ squad leader was killed during an intense battle, he was given a field promotion to Corporal. While in a foxhole during one battle, his buddies affectionately called him “Skip,” which is a name he kept for the rest of his life. 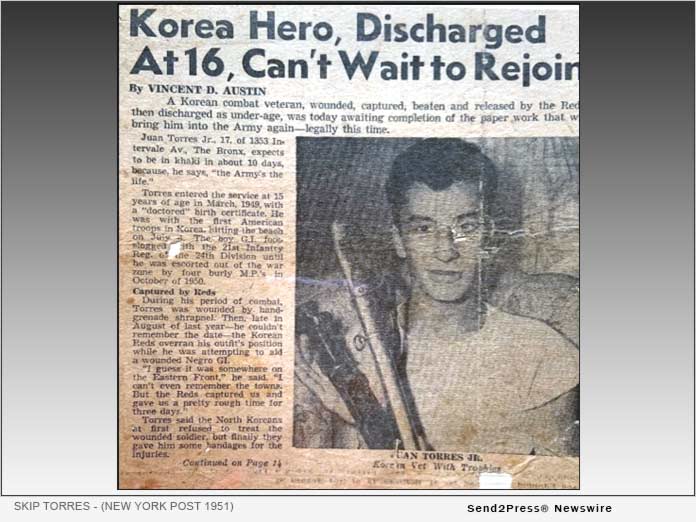 PHOTO CAPTION: Found to be underage, Skip Torres was discharged after being wounded in combat and allowed to join the US Air Force after recovery – New York Post 1951.

Skip was discharged and returned from Korea to New York after the Army discovered he was only 16-years-old. He was, however, later allowed to enlist in the U.S. Air Force as an Air Policeman (later changed by the USAF to Security Forces) where he spent the next 20-plus years, including a one-year tour in Vietnam during the height of the conflict. While in Vietnam, he was promoted to Technical Sergeant (TSgt) where he led the USAF Security Forces at Bien Hoa Air Base and protected U.S. jet fighters and bombers during the “Tet Offensive” when 100,000 Viet Cong attacked U.S. personnel and facilities, including the air base at Bien Hoa.

During the offensive, the Viet Cong struck heavily with continuous artillery, mortar, rocket and machine gun fire in an attempt to take control of his base. TSgt Torres’ security forces were the first line of defense and held back the invading Viet Cong while U.S. Army helicopter gunships and Air Force F-100 fighters took off to end the assault. TSgt Torres was injured during the battle while extracting U.S. troops from a burning Armored Personnel Carrier (APC), but declined any awards saying: “It was just my duty.”

When President John F. Kennedy was assassinated in 1963, Skip was chosen to lead the Honor Guard at Montauk Air Force Base in New York to commemorate the passing of the president and to demonstrate American resolve. Skip received the Purple Heart medal for injuries he sustained from gunshot and shrapnel wounds while in combat against the North Koreans and Chinese. He was also awarded numerous additional U.S. Army and Air Force distinctions, such as the Combat Infantryman’s Badge (CIB) and the U.S. Air Force Commendation Medal.

After retiring from the U.S. Marshals Service, Skip earned a PhD in seminary studies and became an ordained minister where he faithfully served his community for the remainder of his life. For three decades, he volunteered to feed the homeless throughout central and south Florida nearly every week; participated in dozens of veteran’s events; helped to create a veteran’s museum; and delivered hundreds of sermons as an ordained reverend. He gave most of his U.S. military and government retirement pay to charities and non-governmental organizations (NGOs) worldwide, such as a Pakistan Relief Fund for victims of a devastating earthquake, the Feed the Children foundation, Jewish charities based in Israel where he traveled, as well as to veteran’s organizations, such as Veterans of Foreign Wars (VFW) and the Wounded Warrior Project.

Dr. Juan Manuel Torres was one of the many proud Infantrymen of Puerto Rico who volunteered and served valiantly in the Korean and Vietnam wars, and he is one of the last surviving soldiers of Task Force Smith – The Battle of OSAN. He was part of America’s greatest generation, and we thank him for his lifetime of service. He will be interned at Arlington National Cemetery in Virginia, and his legacy will continue in the hearts of the countless people he influenced throughout his 86 years of life.

ABOUT THE NEWS SOURCE:
Family of Juan Manuel Torres

Dr. Torres, who earned a PhD later in life, was a true patriot and American hero. Born in Arecibo, P.R. and raised in the Bronx, N.Y., he joined the U.S. Army in 1949 at the young age of fifteen by "revising" his birth certificate. After enlisting in the U.S. Army, Dr. Torres was immediately deployed to Korea where he was assigned to the 21st Regiment of the 24th Infantry Division (Task Force Smith) and placed directly into combat against aggressing North Korean and Chinese ("the Reds") troops. Outnumbered five to one, his unit suffered heavy casualties over many months of sustained fighting.

LEGAL NOTICE AND TERMS OF USE: The content of the above press release was provided by the “news source” Family of Juan Manuel Torres or authorized agency, who is solely responsible for its accuracy. Send2Press® is the originating wire service for this story and content is Copr. © Family of Juan Manuel Torres with newswire version Copr. © 2020 Send2Press (a service of Neotrope). All trademarks acknowledged. Information is believed accurate, as provided by news source or authorized agency, however is not guaranteed, and you assume all risk for use of any information found herein/hereupon.