NASHVILLE, Tenn., April 9, 2021 (SEND2PRESS NEWSWIRE) — Pop music artist, Ryan Hagan, is a voice that’s crashed into the music scene, and he’s quickly turning heads. His first two singles charted on the radio within one year and he’s just released his third, “Don’t Let Me Stop.” And, it’s looking like it won’t be his last. 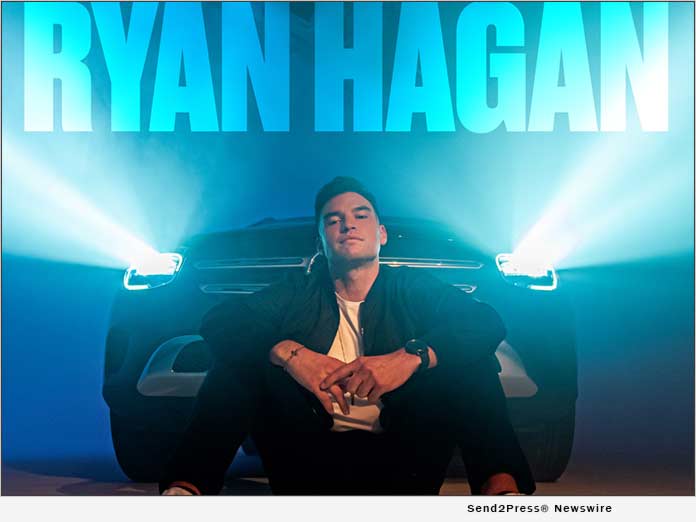 Produced by Grammy®-nominated, multi-platinum producer, Bryan Todd, and co-written by Hagan, “Don’t Let Me Stop,” speaks to people who have been burned in love and need to learn to trust again.

“It’s my most authentic song yet,” Hagan says.

Hagan and Todd’s previous two collaborations, “You Deserve Better” and “Reset” charted on the radio in the U.K. on Music Week’s Commercial Pop, Upfront Club and Black Music (formerly “Urban”) charts. It went as high as number seven.

Hagan has not always been an aspiring singer/songwriter. His background is steeped in athletics and he’s a five-time national wrestling champion. He was also a powerful football and track-and-field athlete during high school. He became a top recruit in his class with the certainty of enrolling in a Division 1 college, but some significant, damaging injuries twisted that path. Always having a passion for music, he decided to give it a serious shot.

So, how did Hagan get here? It all started when a friend connected him with Kim Wood Sandusky, former vocal coach for Beyonce and Destiny’s Child.

“I got an audition with her and she asked me to sing something. After 15 seconds, she said, ‘We’re going to work together.’ The rest is pretty much history,” Hagan says.

The “Don’t Let Me Stop” release timeline is:

Hagan is an American singer-songwriter named to the “Top 20 Artists of 2020” by Music Observer, “Best Artist of 2020” by Nashville Music Reviews and “Top 20 People to Follow on Instagram” by US Reporter. He’s teetering on the edge of international esteem and planning a European tour, post-pandemic. He ultimately plans to expand his reach in the U.S. to become a critically-acclaimed musical artist.

View More Music and Recording News
"It's my most authentic song yet," Hagan says.

ABOUT THE NEWS SOURCE:
Ryan Hagan

Ryan Hagan is an American singer-songwriter named to the "Top 20 Artists of 2020" by "Music Observer," "Best Artist of 2020" by "Nashville Music Reviews" and "Top 20 People to Follow on Instagram" by "US Reporter." He's teetering on the edge of international esteem and planning a European tour, post-pandemic. He ultimately plans to expand his reach in the U.S. to become a critically-acclaimed musical artist.

LEGAL NOTICE AND TERMS OF USE: The content of the above press release was provided by the “news source” Ryan Hagan or authorized agency, who is solely responsible for its accuracy. Send2Press® is the originating wire service for this story and content is Copr. © Ryan Hagan with newswire version Copr. © 2021 Send2Press (a service of Neotrope). All trademarks acknowledged. Information is believed accurate, as provided by news source or authorized agency, however is not guaranteed, and you assume all risk for use of any information found herein/hereupon.