Says co-founder Savithri Gandhi, "Griots are traditionally considered to be shamans or wizards, but nowadays they tend to be the wisest elders in an African village, and the work they do is more akin to counseling than magic. The repository of wisdom they represent is something we'd like to share with the whole world."

LOS ANGELES, Calif., Sept. 9, 2015 (SEND2PRESS NEWSWIRE) — Reliable group counseling by certified experts is now available online, according to a group of therapists, psychologists, and consultants who have coalesced to form Growthnet, the world’s largest multi-lingual network of Web-based group counselors. According to founders John Toomey, Amy Chang, and Savithri Gandhi, current technology allows services to be provided in several languages, with simultaneous interpretation soon to be available in 17 different tongues.

Programs like Skype, Google Hangouts, and WebEx have been used for years for business meetings. More recently, educators have used these to conduct online classroom sessions. The psychological growth community has been slower to embrace these new technologies, due to privacy concerns, but methods are being developed to adequately address these issues.

Many of Growthnet’s counselors come from Therapion.com, which has pioneered online psychotherapy in 27 countries for the last ten years.

Recent interactive sessions have included Finnish counselor Timo Kojonen on methods of Self-Knowledge, Brazilian Psychotherapist Izaura Vale on Jealousy, and Spanish Psychologist Clara Pavon on communication in relationships. Upcoming workshops include Barry Friedman’s Fun For a Change, which combines Laughter yoga, play, and Improv to generate a creative flow state, and Nataliya Laine’s workshop (in Russian) examining genetics, society, and the development of Identity. Chinese Clinical Psychologist Mary Liu, from Beijing University, will offer a series of sessions in Mandarin and Cantonese on the burgeoning use of social media sites in China for group counseling.

In the works for 2016 is a series of open-ended conversations called Meetings of the Minds, based on Madame de Stael’s 19th century literary salons. These will incorporate free-wheeling discussions with accomplished international writers, scientists, philosophers, and thinkers on important cultural and social topics that receive little coverage in traditional or social media. Simultaneous interpretation in 11 languages will be available. Later in the year a group of distinguished Psychoanalysts from around the world will discuss trends in their field.

Also on tap is a group therapy session during which all participants will be wearing NeuroSky™ Electroencephalograph headsets, so that the lead psychotherapist can observe graphs detailing the neural artifacts of their mental and emotional processes in real time, while they are talking or listening.

Cutting edge Webcast technology allows the network to perform counseling in ways previously thought impossible. One therapist will conduct sessions while carefully monitoring the on-screen facial expressions of patients at various locations on the Autism spectrum, so that those who traditionally have difficulty matching emotions with facial expressions can improve this ability.

Later next year an ongoing online conclave of West African griots will be offered in 12 languages.

Says Gandhi, “Griots are traditionally considered to be shamans or wizards, but nowadays they tend to be the wisest elders in an African village, and the work they do is more akin to counseling than magic. The repository of wisdom they represent is something we’d like to share with the whole world.”

Although simultaneous translation will be offered, organizers stress that significant value can be derived from presentations even when all the material is in a foreign language.

“What we’re finding,” says Toomey, “is that people get a lot out of this even when they don’t know the language. There seems to be a transfer of insight beneath or beyond the words, which is something we’d like to explore further.”

Counselors from Uzbekistan, Croatia, Jamaica, and Nepal will be added in 2017.

Though group counseling tends to be associated with psychotherapy, Chang stresses that many of the groups will look more like celebrations: “It isn’t necessary that this wondrous technology should only be used for people who are looking to solve problems, psychological or otherwise. We can also use it to create groups of friends, separated by oceans and cultures but devoted to sharing wisdom, laughter, deep insights, and love. The possibilities are endless.” 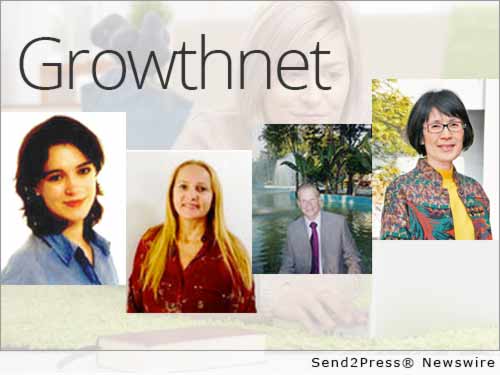 NEWS ARCHIVE NOTE: this archival news content, issued by the news source via Send2Press Newswire, was originally located in the Send2Press® 2004-2015 2.0 news platform and has been permanently converted/moved (and redirected) into our 3.0 platform. Also note the story “reads” counter (bottom of page) does not include any data prior to Oct. 30, 2016. This press release was originally published/issued: Wed, 09 Sep 2015 19:55:55 +0000

View More California Business News
Says co-founder Savithri Gandhi, "Griots are traditionally considered to be shamans or wizards, but nowadays they tend to be the wisest elders in an African village, and the work they do is more akin to counseling than magic. The repository of wisdom they represent is something we'd like to share with the whole world."

ABOUT THE NEWS SOURCE:
Growthnet

Growthnet brings live, real time interactive classes, webinars, counseling sessions, and group discussions with renowned teachers, counselors, mentors, psychologists, and facilitators from around the world to everyone. Each group is led by an expert in a particular style of coaching, counseling, Self or Group Inquiry, or bodywork. Each features a participatory format in which everyone can join equally. We draw from many modalities to address all kinds of self-improvement, in several different languages.

LEGAL NOTICE AND TERMS OF USE: The content of the above press release was provided by the “news source” Growthnet or authorized agency, who is solely responsible for its accuracy. Send2Press® is the originating wire service for this story and content is Copr. © Growthnet with newswire version Copr. © 2015 Send2Press (a service of Neotrope). All trademarks acknowledged. Information is believed accurate, as provided by news source or authorized agency, however is not guaranteed, and you assume all risk for use of any information found herein/hereupon.