ST. AUGUSTINE, Fla., July 31, 2019 (SEND2PRESS NEWSWIRE) — The St. Augustine Distillery joined two Florida distillers along with more than 150 craft distillers from around the country who gathered in Washington, D.C. from July 22 through July 24 for the distilled spirits industry’s 10th Annual Public Policy Conference, co-hosted by the Distilled Spirits Council of the United States and the American Craft Spirits Association (ACSA). The conference featured a series of legislative and regulatory sessions on key federal and state issues impacting the distilling industry. 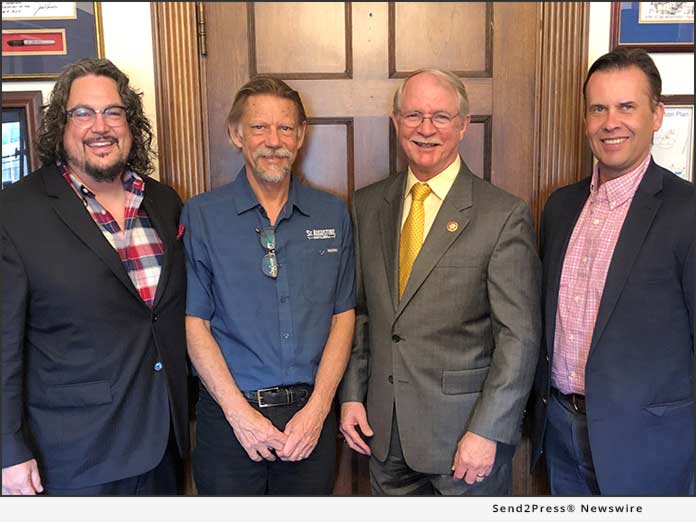 Meetings included Congressional Members John Rutherford, Lois Frankel and Donna Shalala along with staff from eight other members as well as staff from Senators Rubio and Scott to urge support for the Craft Beverage Modernization and Tax Reform Act (H.R. 1175/S. 362). This critical legislation makes permanent a federal excise tax cut on distilled spirits and was enacted in 2017. Without Congressional approval, the tax cut for distillers will expire on Dec. 31, 2019.

The group also discussed the harm that retaliatory tariffs on spirits exports are having on American distillers, large and small, and the importance of their distilleries to the economic development of the surrounding community.

“Meeting with the members and their staff was the highlight of the conference,” said McDaniel. “We conveyed the importance and urgency of making the tax cut on distilled spirits permanent. The reduced tax rate has had a major impact on our distilleries enabling us to buy new equipment, hire more staff, offer an employee health plan and buy more local agriculture. It was impactful to share with each member how this bill will continue to help our small distilleries grow, as well as the devastating impact on our business if it does not pass.”

“This is a historic moment for our industry as more than 150 distillers from 33 states descend on Washington to rally further support for this critical, urgent legislation,” said Margie A.S. Lehrman, CEO, American Craft Spirits Association. “Without permanent and immediate Federal Excise Tax reform, the stability of this vibrant industry, and the industries that surround us – agriculture, tourism and the broader hospitality industry – are bound to be paralyzed.”

“These distillers delivered a unified message to legislative leaders on Capitol Hill at a critical time,” said Chris Swonger, President and CEO of the Distilled Spirits Council of the United States, the national trade association representing producers of distilled spirits sold in the United States. “The federal tax cut on spirits is set to expire at the end of the year and the negative impacts of the retaliatory tariffs against U.S. spirits products are mounting.”

Distillers who attended the conference also had opportunities to showcase their craft spirits at a “Meet America’s Distillers” reception on Capitol Hill for lawmakers and a “Spirits of America” reception journalists at the National Press Club.

About the St. Augustine Distillery:

The distillery was co-founded by Philip McDaniel and Mike Diaz, entrepreneurs with a passion for community and sustainable economic development. They joined the national movement of distilling super premium, small batch spirits by opening the distillery in St. Augustine.

The American Craft Spirits Association is the only national registered non-profit trade association representing the U.S. craft spirits industry. Its mission is to elevate and advocate for the community of craft spirits producers. For information about ACSA, call 202-669-3661 or: https://americancraftspirits.org/.

View More Ballots Bills and Laws News
"This is a historic moment for our industry as more than 150 distillers from 33 states descend on Washington to rally further support for this critical, urgent legislation," said Margie A.S. Lehrman, CEO, American Craft Spirits Association.

The St. Augustine Distillery is located in St. Augustine Florida. The Distillery opened in 2014 in the historic FP&L Ice Plant, built as part of St. Augustine's first power and ice complex in 1907. The ice plant is a contribution to the Lincolnville Neighborhood on the National Register of Historic Places. The distillery was co-founded by Philip McDaniel and Mike Diaz, entrepreneurs with a passion for community and sustainable economic development. They joined the national movement of distilling super premium, small batch spirits by opening the distillery in St. Augustine.

LEGAL NOTICE AND TERMS OF USE: The content of the above press release was provided by the “news source” St. Augustine Distillery or authorized agency, who is solely responsible for its accuracy. Send2Press® is the originating wire service for this story and content is Copr. © St. Augustine Distillery with newswire version Copr. © 2019 Send2Press (a service of Neotrope). All trademarks acknowledged. Information is believed accurate, as provided by news source or authorized agency, however is not guaranteed, and you assume all risk for use of any information found herein/hereupon.