ORLANDO, Fla., Oct. 20, 2017 (SEND2PRESS NEWSWIRE) — After more than four decades, Ozone Unlimited is releasing an extremely rare collectible album – “Zerfas” – on compact disc. And it’s doing it to coincide with Halloween. Why? The original album cover design is orange and black to give a nod to the occasion, the same time of year the original album was first released in ’73. 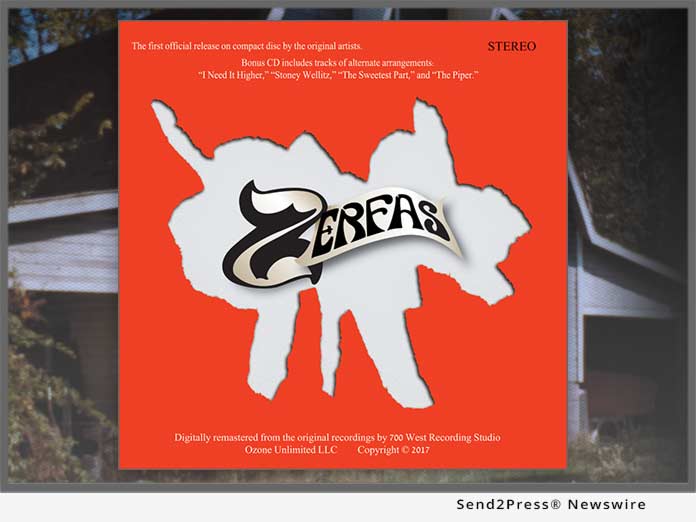 Apparently, fans have found it to be a treat based on the countless number of inferior bootlegs found on the Internet, the raving reviews, and the cost to buy an original LP – if you’re lucky enough to find one.

Phil Spector described the Zerfas album as “extraordinary” in a comment he wrote on Rising Storm, a vintage music feed. Spector also noted the last time he saw the Zerfas album for sale was on eBay (prior to 2010) which fetched more than $1,500; in 2017, another album went for $1,913.

“It’s an album that tells a story about life and times through music which is why I called them chapters instead of sides,” David Zerfas, the band’s founder, says. “We’ve been asked if the story will continue. We’ll see.”

Plans are in the works to repress an official version of the original LP on vinyl for a limited run, most likely, for the last time.

First cut with the guidance of sound engineer, Moe Whittemore, in his 700 West Studios in New Palestine, Ind. – this album was the result of a teenage band influenced by artists like The Beatles, Simon & Garfunkel, Crosby, Stills and Nash, Led Zeppelin and Frank Zappa.

This official first CD release will also include a bonus CD of never released alternate arrangements for some of the original album songs. Zerfas, who designed the original album cover, included a picture of his family’s barn where the band rehearsed before going into the studio to cut the album as part of his CD design.

Since the original LP was cut in the wake of Vietnam, a portion of profits will be donated to organizations that support military veterans.

The CD will be available for sale on their Facebook page, so like the page to stay on top of the news at: https://www.facebook.com/TheZerfasAlbum/.

View More Music and Recording News
"It's an album that tells a story about life and times through music which is why I called them chapters instead of sides," David Zerfas, the band's founder, says. "We've been asked if the story will continue. We'll see."

ABOUT THE NEWS SOURCE:
Ozone Unlimited

Since 1973 when Ozone Unlimited made its first appearance on the back of a vinyl LP record album titled "Zerfas," we have created countless original productions for the media and entertainment industry. We have been instrumental in the creation of popular websites like the former garageband.com to promote independent musicians and nielsen.com the rating system giant. Our talent and imagination only rivaled by our experience, we have successfully created countless television commercials, documentaries, music videos, training videos, numerous corporate projects, and an original television series.

LEGAL NOTICE AND TERMS OF USE: The content of the above press release was provided by the “news source” Ozone Unlimited or authorized agency, who is solely responsible for its accuracy. Send2Press® is the originating wire service for this story and content is Copr. © Ozone Unlimited with newswire version Copr. © 2017 Send2Press (a service of Neotrope). All trademarks acknowledged. Information is believed accurate, as provided by news source or authorized agency, however is not guaranteed, and you assume all risk for use of any information found herein/hereupon.