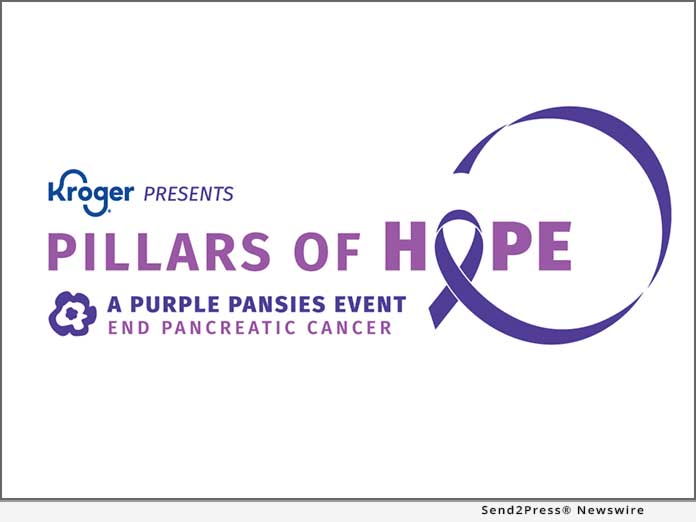 Founding Purple Pansies in 2008, Maria Fundora holds the gala in September in honor of when she lost her mother, Iluminada Milian, in 2007. “She fought so hard,” Fundora said. “When I lost her three months after diagnosis I could not just sit still. I had to do something. I had to fight, to be able to find a way to help others, so others would not go through what my family went through.”

The evening included a presentation of the inaugural Pillars of Hope Bill Palmer Legacy Award.

The award honors the late Bill Palmer (founder of Applebee’s) for his pioneering support of Purple Pansies and his own courageous fight with the disease. For the first year of this award, Tim Brown, Atlanta President of Kroger, received the award for his involvement and service, both personally and professionally.

“Kroger and our partners are excited to be involved with Purple Pansies and Pillars of Hope and to be able to assist in raising money for this organization. I was truly honored to be recognized and receive the Bill Palmer Legacy Award,” said Tim Brown, president of the Kroger Atlanta division. “My wife, Angie, and I look forward to supporting this organization in the future.”

According to the American Cancer Society, research for pancreatic cancer is one of the least funded of all cancers. The organization is guided by “CARS”: Community, awareness and resources.

To date, Purple Pansies has raised over $4 million to support research and clinical trials through the Phoenix-based Translational Genomics Research Institute (TGen), an affiliate of City of Hope.

“We have learned people are coming in earlier to diagnose pancreatic cancer,” said Dr. Daniel Von Hoff, Distinguished Professor in TGen’s Molecular Medicine Division. “Stage 1a early pancreas cancer 5 year survival rates have grown from 45% to 84% due to awareness with events like this gala.”

During the gala, a video featured Dr. Von Hoff, describing how pancreatic cancer treatments are improving and a current clinical trial of patients on a ketogenic diet. He encouraged the fight and displayed a purple bracelet made by Lana Stowell, a local Alpharetta, Ga., youth. Everyone in the audience received one of the more than 200 bracelets made by Lana to join us together as a community.

Dr. Andrew Page, M.D., director of surgical oncology and HPB surgery at Piedmont Healthcare, spoke about the unique fight of pancreatic patients: “They all share in common their trust in me which I treasure and their warrior spirit which I honor … Let’s keep going.”

During the evening, Purple Pansies officially announced the launch of their scholarship program for high school seniors who have a parent, guardian or are themselves suffering from pancreatic cancer. Their goal is to continue support families across the country that have been affected by pancreatic cancer.

Additional information can be found at https://purplepansies.org/

View More NonProfit and Charities News
"Kroger and our partners are excited to be involved with Purple Pansies and Pillars of Hope and to be able to assist in raising money for this organization. I was truly honored to be recognized and receive the Bill Palmer Legacy Award," said Tim Brown, president of the Kroger Atlanta division.

ABOUT THE NEWS SOURCE:
Purple Pansies

Purple Pansies was founded by Maria Fundora who lost her loving mother, Iluminada Milian, to pancreatic cancer in 2007. Purple Pansies is a way to honor her Mother, spread her lesson of compassion, and carry on in her footsteps by helping others afflicted by the disease that took her away.

LEGAL NOTICE AND TERMS OF USE: The content of the above press release was provided by the “news source” Purple Pansies or authorized agency, who is solely responsible for its accuracy. Send2Press® is the originating wire service for this story and content is Copr. © Purple Pansies with newswire version Copr. © 2021 Send2Press (a service of Neotrope). All trademarks acknowledged. Information is believed accurate, as provided by news source or authorized agency, however is not guaranteed, and you assume all risk for use of any information found herein/hereupon.