TRENTON, N.J., April 15, 2021 (SEND2PRESS NEWSWIRE) — While “Weed Day” 4/20/21 marks a luminous occasion for longtime marijuana activist and entrepreneur, Ed “NJWeedman” Forchion, in his home state of New Jersey, per the recent legalization of cannabis, the victory is somewhat bittersweet for him. The bitter is that his current “Citizen’s Dispensary” operates as a black-market operation as he continues to battle for inclusion within the legal arena. 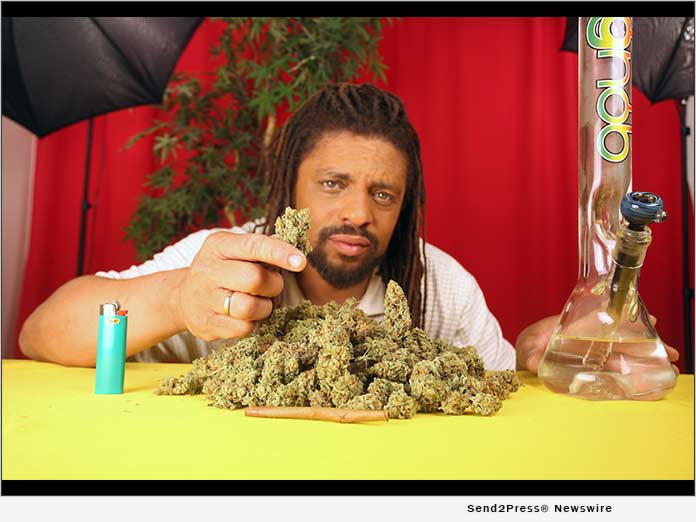 The sweet is, not only a huge in-store and online celebration party this 4/20, but also the announcement of his expansion, with a 420-themed lounge opening soon in Miami, Florida, entitled, The Joint of Miami. Onsite festivities for this 4/20 at NJWeedman’s Joint, located at 322 E. State St. in Trenton, include vendors, live entertainment and food with online streaming across all the NJWeedman’s Joint social media platforms and website.

A self-confessed weed smuggler from the early 90’s, Forchion’s 1997 arrest by the Camden County Drug Task Force and members of the local DEA would turn out to be just one of many over several decades. Never one to back done from authority, he achieved media notoriety when he was arrested for smoking marijuana in front of the entire New Jersey State Assembly in 2000 and garnered a national platform when he fired it up at the Liberty Bell in Philadelphia, PA during the Republican National Convention. It was 10 years before the launch of Instagram and smoking weed publicly was still a criminal act, but there was no social media to make such radical deeds of civil disobedience go viral. Over 20 years later however, with marijuana finally legalized in over half of the United States, Forchion knows that his consistent battles on behalf of the plant are part of the steam engine behind cannabis now being heralded as a ‘new’ billion-dollar industry.

A cult figure in the marijuana legalization community, Forchion has since become one of the most vocal and controversial members of the pro-pot movement. He is the founder of the Legalize Marijuana Party of New Jersey and has run previous campaigns for Governor, U.S. Senate, Congress, the State Legislature, and the Burlington County Board of Freeholders. After decades of public persecution, Ed Forchion is finally being applauded for his decades of activism. Last month he spoke on virtual panels at Stockton and Princeton University, was featured on NBC News in New York and he is slated to appear on an upcoming segment of ABC-TV Nightline.

His many marijuana infused media stunts are well documented, including his attempt to legally change his name to NJWeedman.com, denied first by the courts in New Jersey in 2004 and in another case in California in 2011. His 2010 arrest in Mount Holly New Jersey, after a traffic stop where he was charged with possession with intent to distribute, with a jury ultimately serving a 12-0 verdict of acquittal, also added to his lore. His marijuana mansion parties in the Hollywood Hills between the years of 2009 and 2011; his Liberty Bell Temple dispensaries in Hollywood and his books, including his first title, “Public Enemy #420,” published in 2010 all lend credence to NJWeedman’s devotion for marijuana.

Police raids, DEA investigations, and state prosecutors have hounded Forchion coast to coast from New Jersey to Los Angeles and now back in New Jersey, but he has never missed a beat. His current reincarnation is NJWeedman’s Joint, opened in 2015 with the support of his business partner, Debbi Madaio. The establishment was raided in 2016 by the local police and Forchion ultimately spent 447 days behind bars, only to later have a large portion of the charges dismissed by a judge.

“I always dreamed this day would come,” expresses Forchion. “I, like so many others, knew there was nothing criminal about this plant, yet we were treated like criminals. Now that it is legalized, our battle is with the politicians and corporations who want to shut out people like me, the brick layers of this industry. I tell everyone, I’m not getting off this ‘cannabus.’ I’ve been a ride or die soldier for years now and I’m not going anywhere.”

“Back in mid-2000, I left New Jersey for Hollywood, CA. I was one of the early marijuana legalization pioneers out there, until the DEA made me leave. I came back to New Jersey, I saw what was going on and I conquered. My boast is that they can’t get a jury of 12 to convict me. Now I’m headed to Miami and I’m super excited about the upcoming Florida expansion with the new lounge location. In fact, I envision ‘Joint’ locations around the country,” notes Forchion.

For more information about NJWeedman’s Joint 4/20 party, go to https://njweedmansjoint.com/home.

For more information about The Joint of Miami, head over to https://thejointofmiami.com/.

Take a puff with NJWeedman and read all about his adventures at https://linktr.ee/NJWeedman.

View More Hemp and Cannabis Business News
"I always dreamed this day would come," expresses Forchion. "I, like so many others, knew there was nothing criminal about this plant, yet we were treated like criminals."

LEGAL NOTICE AND TERMS OF USE: The content of the above press release was provided by the “news source” Ed Forchion or authorized agency, who is solely responsible for its accuracy. Send2Press® is the originating wire service for this story and content is Copr. © Ed Forchion with newswire version Copr. © 2021 Send2Press (a service of Neotrope). All trademarks acknowledged. Information is believed accurate, as provided by news source or authorized agency, however is not guaranteed, and you assume all risk for use of any information found herein/hereupon.