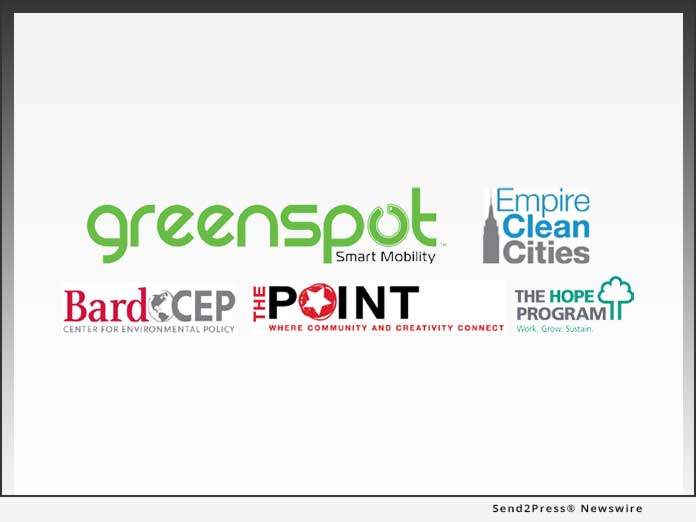 Through this program, Greenspot anticipates increasing passenger vehicle utilization (the percentage of the day that a vehicle is being driven, rather than sitting parked) from 5% to 40%, reducing the overall number of vehicles on South Bronx roads by as many as ten for every shared EV provided.

The proposed Advanced Vehicle Technology aims to provide the target community with publicly-shared electric vehicles, EV charging infrastructure, and trip-planning tools, while supporting relevant public agencies with networked, real-time data on EV charging and vehicle use; demonstrating the viability of advanced electric mobility technologies in communities of low-socioeconomic status (SES); optimizing transit grid efficiency and reducing road and parking congestion; and supporting first- and last-mile solutions that result in greater equity and transit accessibility. If successful, this project will serve as a case study for the viable execution of electric mobility technologies in low-SES communities, whom research shows have the most to gain from such solutions.

“This program is intended not only to develop sustainable transit infrastructure for the South Bronx, but also throughout the borough,” said Michael Mazur, COO of Greenspot. “We’re here to show that shared electric vehicles and charging infrastructure can be an equitable solution for the public as a whole, and not just tailored to those with a relatively high socioeconomic status.”

Also participating on this project is The HOPE Program, home to the Sustainable South Bronx initiative (winner of the EPA’s Environmental Quality Award). Working with low-income and at-risk communities throughout the community, The HOPE Program will guide the selection of ideal research and project participants, who will receive free or reduced-cost mobility solutions in exchange for participation in an ongoing research study that aims to identify the community- and city-level impacts of the proposed intervention.

The Bard Center for Environmental Policy is leading the project’s research planning, literature review, and survey execution as part of the project’s commitment to solution optimization for low-income communities. The POINT CDC will serve as an overall consultant and advisor for project activities, consistent with the organization’s mission to support youth development and the cultural and economic revitalization of the Hunts Point section of the South Bronx.

“This project will provide important information about how shared mobility can support the transportation needs of low-income commuters,” said Eban Goodstein, Director of Bard’s Graduate Programs in Sustainability.

Over 160,000 Bronx residents are estimated to rely primarily on cars to get to and from workplaces on a weekly basis. Public transportation, on which New York City residents depend more than the five next most populous U.S. cities combined, is unreliable in the Bronx due to tightly-packed transit systems primarily designed to bring commuters through, rather than to or from, the borough. Seventy-two percent of Bronx residents rely on personally-owned vehicles to get to work or school on a daily basis, more than any other New York City borough, and with about half of these residents using both personally-owned vehicles and public transportation during daily transit. By eliminating the need for personally-owned vehicles, the Smart Mobility Program aims to lower the number of vehicles on public roads.

Lowering asthma rates, and providing increased access to healthcare services for young mothers and children living in the South Bronx, is a core concern for the proposed intervention. The asthma hospitalization rate in the Bronx is 700% higher than in the rest of New York State and 70% higher than in the rest of New York City. Bronx residents are at triple the risk of asthma-related death when compared with the national average, with an average child asthma rate of 20%. Residents’ proximity to central highways in the Bronx (I-87, I-95, I-295, US-1) is a primary contributor to asthma rates, as is reduced access to medical care for low-income residents. Outdated infrastructure is considered partly responsible for the Bronx’ healthcare disparities and risks, with nearly 40% of Bronx’ housing units built in or before 1939.

Infants are particularly vulnerable to diesel exhaust and other prevalent environmental risks in the Bronx; teen birth rates in the Bronx continue to be 75% higher than in any other New York borough, with infant mortality rates at least 25% higher than in the rest of the city. Healthcare access for prospective mothers in the Bronx is essential, with Bronx mothers disproportionately likely to die during childbirth; compared with those of other boroughs, Bronx mothers have the highest rates of obesity, diabetes, and other key health risks that affect infant and material mortality.

Founded in 2014, Greenspot has partnered with dozens of domestic and international leaders to revolutionize mobility by facilitating EV access and adoption and helping reduce the amount of cars owned per household by one. Recognized with a 2018 Governor’s Environmental Excellence Award for its work to reduce greenhouse gas emissions in New Jersey, Greenspot is a rising national leader in cleaner, safer, and smarter mobility. Greenspot’s unique platform optimizes EV charging station use and is future-proofed to enable improved service value over time as EV ridership increases and available technologies advance.

Greenspot’s Smart Mobility Program is estimated to have removed approximately 650 personally owned vehicles from public roads, driving a reduction in vehicle miles travelled (VMT) by an estimated 4.5 million and reducing carbon emissions by over 1,750 tons; SMP members have saved over $11M in costs associated with car ownership, maintenance, insurance, and fueling, while reducing gasoline usage by over 300,000 gallons. To learn more about Greenspot, visit http://joingreenspot.com/.

Empire Clean Cities (ECC) brings comprehensive experience managing previous vehicle technology grants and PEV planning and implementation of grants from both the US DOE and other federal and state agencies. ECC has participated in numerous research-based grants funded by US DOE and NYSERDA, including a literature review, survey and data collection, fuel efficiency and savings calculations, case studies, and other related research activities. ECC works closely with both the National Labs and CUNY schools.

This project is currently seeking access to roadside parking spots in the South Bronx in high-population or high-traffic areas; to propose a project site for this program, please contact Daniel Kessler, Director of Grants for Greenspot, at the information provided below.

View More Automotive and Motorsports News
"This program is intended not only to develop sustainable transit infrastructure for the South Bronx, but also throughout the borough," said Michael Mazur, COO of Greenspot.

ABOUT THE NEWS SOURCE:
Greenspot

Founded in 2014, Greenspot has partnered with dozens of domestic and international leaders to revolutionize mobility by facilitating EV access and adoption and helping reduce the amount of cars owned per household by one. Recognized with a 2018 Governor's Environmental Excellence Award for its work to reduce greenhouse gas emissions in New Jersey, Greenspot is a rising national leader in cleaner, safer, and smarter mobility.

LEGAL NOTICE AND TERMS OF USE: The content of the above press release was provided by the “news source” Greenspot or authorized agency, who is solely responsible for its accuracy. Send2Press® is the originating wire service for this story and content is Copr. © Greenspot with newswire version Copr. © 2019 Send2Press (a service of Neotrope). All trademarks acknowledged. Information is believed accurate, as provided by news source or authorized agency, however is not guaranteed, and you assume all risk for use of any information found herein/hereupon.