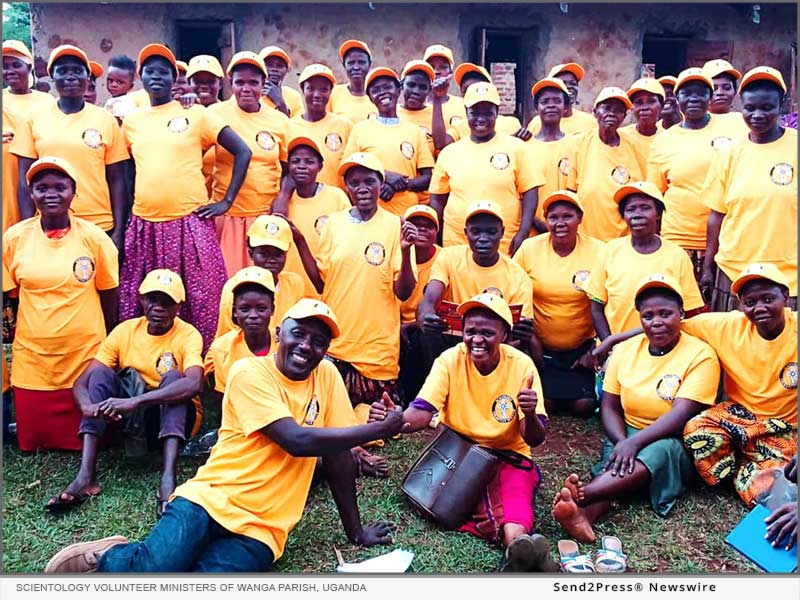 PHOTO CAPTION: The Scientology Volunteer Ministers of Wanga Parish, Uganda, are using the Scientology Tools for Life to empower their village and make it a self-sustaining community.

“It all started when my Aunt Milly gave me a phone call in August last year,” says Arthur Wamatsu. She introduced him to the Scientology Volunteer Ministers program and its 19 online courses. “She asked me to take them as they would change my life for good.”

Arthur began studying the courses and was so excited about what he learned, he shared it with his brother and his aunt Agnes. He introduced the courses to his dad, Martin, and his uncle Hanan, who are both teachers. Next came his friend Sarah who is studying nursing and midwifery, and she shared the news with four of her friends.

Arthur, his dad, uncle, and aunts Agnes and Milly decided to extend this life-changing project to Wanga Parish, their birthplace — a community struggling in poverty.

“We all arrived from different areas to our birth village on the same day,” says Arthur. “Since then, we have never looked back. Our primary target has been making Wanga Parish a self-sustaining community with fully empowered people using the Scientology online courses.”

They worked out four immediate projects:

They met with village elders and local leaders, who endorsed their plan.

Key was to put 400 people through the courses, because then they would have the skills to help accomplish the other targets. They immediately began an intensive training program.

“So far, 360 have completed the training and the remaining 40 are about to begin,” says Arthur. “A secondary school has now been registered and we are mobilizing resources to start construction. Our family has donated 10 acres to build it on.”

“We are still in the process of mobilizing seeds for planting since most of these residents have been in an 84-week lockdown and they ate all their seeds and now have none to plant.”

When they began the program, they discovered that many of the youths were alcoholics and used drugs. So they had them study the online Scientology course on drugs. But they also introduced a football tournament and grouped the young kids and the older ones in two different groups.

“After doing their garden work, they play soccer late into the evening instead of doing drugs,” he says.

Vicky, a nurse who has completed the Volunteer Ministers training, has moved to Wanga and will work in the clinic once it opens. Meanwhile, she provides first aid and Scientology assists — techniques developed by L. Ron Hubbard to speed recovery by addressing the emotional and spiritual factors in stress and trauma.

“The other very good news is that the parish next door has requested we train their people too,” says Arthur. “In a village of 1,000 people, we will soon have 400 fully trained Volunteer Ministers. That is almost the entire adult population as 60 percent of our population is children.”

Caption: The Scientology Volunteer Ministers of Wanga Parish, Uganda, are using the Scientology Tools for Life to empower their village and make it a self-sustaining community.

View More Religion and Churches News
"We all arrived from different areas to our birth village on the same day," says Arthur. "Since then, we have never looked back. Our primary target has been making Wanga Parish a self-sustaining community with fully empowered people using the Scientology online courses."