STONY BROOK, N.Y., Sept. 10, 2021 (SEND2PRESS NEWSWIRE) — iCell Gene Therapeutics, a clinical stage biopharmaceutical company focused on immunotherapies for hematologic malignancies, solid tumors, organ rejections and autoimmune disorders, today announced the publication of their clinical study utilizing cCAR T-cell immunotherapy to successfully treat a patient with lupus. Their CAR is directed against CD19 and BCMA surface proteins generating a cCAR with dual expression of CD19 and BCMA CAR molecules. Their cCAR is one of a kind in the family of engineered CAR T-cells researchers are studying. 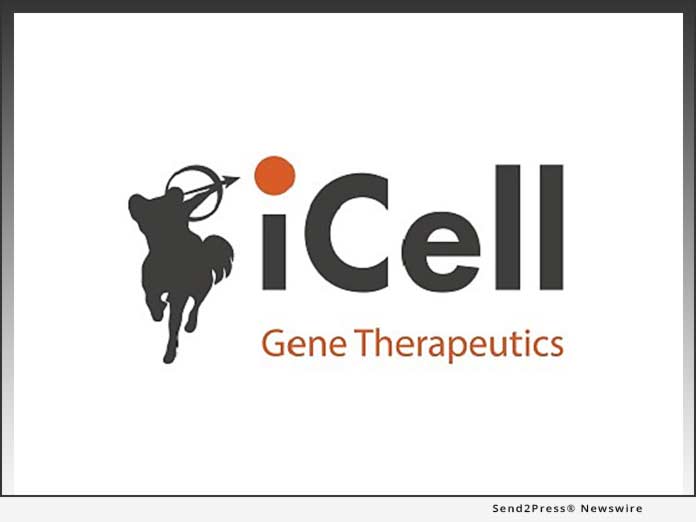 According to Dr. Yupo Ma, founder of iCell Gene Therapeutics, ”After a single infusion of CD19-BCMA cCAR the patient achieved undetectable levels of autoantibodies that mediate SLE, successfully treating the patient’s SLE for 2 years without the need for additional medications.”

Systemic lupus erythematosus (SLE) is an antibody-mediated autoimmune disease, in which autoantibodies attack its own tissues, resulting in widespread tissue damage in the affected organs including kidneys, lungs, joints, brain and blood vessels. According to the Lupus Foundation of America, it estimates that 1.5 million Americans, and at least five million people worldwide, have a form of lupus.

iCell has developed a novel compound Chimeric Antigen Receptor (cCAR)approach. In this approach, the cCAR T cells express two distinct and fully functional CAR molecules, one that targets the molecule CD19 present on B cells and one that targets BCMA, which is present on plasma cells. In their recently published paper, researchers have shown that this cCAR led to rapid and dramatic decreases in B cell levels and levels of “autoantibodies” (antibodies that attack the body’s own cells) in a patient with SLE.

As B cells are part of the normal immune system, it is preferable that the elimination of B cells be temporary. After 9 months of B cell depletion, the patient’s B cells returned to normal. Importantly, the levels of autoantibodies remained undetectable. Based on these results, the researchers concluded that cCAR effectively “reset” the antibody-producing populations. In this “reset,” the problematic cell populations were removed, leaving behind a fresh, clean slate. From this, new B cells and plasma cells were eventually formed, which did not have the same autoantibody-producing properties. Because of this, the patient has not had further lupus symptoms despite receiving no additional medications for over 2 years.

Given the prevalence of antibody-mediated disorders, this cCAR may prove useful for a variety of different medical conditions.

Sjögren’s Syndrome, autoimmune hemolytic anemia, neuromyelitis optica spectrum disorder, celiac disease, type 1 diabetes, inflammatory bowel disease, rheumatoid arthritis, psoriasis, and multiple sclerosis all incorporate autoantibody formation in disease pathogenesis. Additionally, organ rejection following transplantation may be mediated by antibodies. By “resetting” the immune system prior to organ transplantation, this antibody-mediated rejection may be avoided. More research is needed on the long-term efficacy and safety of this treatment, but future applications of cCAR has a large window of opportunity.

iCell Gene Therapeutics, located in Stony Brook, New York, is a clinical-stage biopharmaceutical company developing first-in-class chimeric antigen receptor engineered cells. Their main focuses are on autoimmune disorders, AML, and T-cell malignancies. Their current clinical trials utilize their CARvac, T-cell targeted CARs, cCARs and non-gene edited universal CARs engineered as treatments for cancer, organ rejections and autoimmune diseases. These studies are ongoing in the US and China for their use.

LEGAL NOTICE AND TERMS OF USE: The content of the above press release was provided by the “news source” ICell Gene Therapeutics LLC or authorized agency, who is solely responsible for its accuracy. Send2Press® is the originating wire service for this story and content is Copr. © ICell Gene Therapeutics LLC with newswire version Copr. © 2021 Send2Press (a service of Neotrope). All trademarks acknowledged. Information is believed accurate, as provided by news source or authorized agency, however is not guaranteed, and you assume all risk for use of any information found herein/hereupon.