LOS ANGELES, Calif., May 27, 2020 (SEND2PRESS NEWSWIRE) — An American artist, Ayzay Ukwuoma, presents new images from an art performance he had done less than one month before the arrival of the COVID-19 pandemic. Today’s practice of social distancing, currently makes the performance impossible to do. But, the images of his “Idea Sale,” performed in France, only weeks before the pandemic began are striking, as they reveal a sentiment of trust needed for us to continue to exchange our ideas. 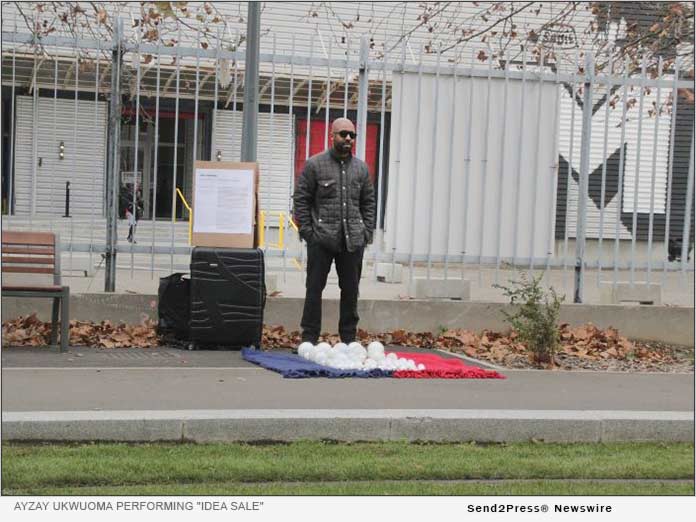 Just a few short weeks before countries closed their borders, an American artist arrived in France and visited the Biennale de Lyon to perform a sell outdoors. Ayzay Ukwuoma, a Los Angeles-based artist, held an “Idea Sale” outside of the three sites where the biennale was active on that afternoon; Usine Fagor, L’Institut d’art Contemporain, and macLYON.

In front of the large gatherings, the artist carefully retrieved 50 light bulbs of varying sizes from a large suitcase, and laid them atop a pair of blue and red rugs, to form the make-shift composition of a flag with lights as stars. Poignantly, on that weekend, which also featured the city of Lyon’s Festival of Lights, he took a light bulb in his hand, raised it in the air in a forwarding motion, gesturing to the passersby. Shortly after, he extended another, and then another. Ayzay Ukwuoma had begun his “Idea Sale.” 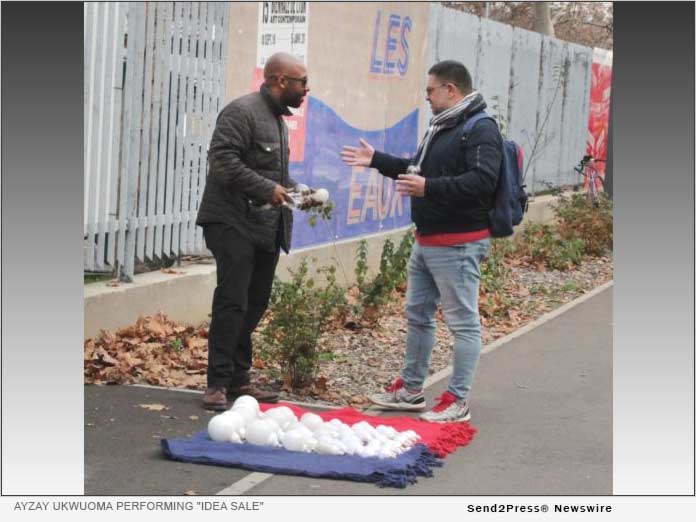 Resonating with a wink at the artist David Hammons who did another kind of sale in New York City many decades ago, Ukwuoma placed his lightbulbs on the rugs with care. He would explain that each bulb came with a price tag on which a verb was printed with a translation on each side—one in French, and the other in English, referencing actions exchanged between strangers on both sides of a dialogue.

Now that access to space is limited and stifled out of necessity, the “Idea Sale,” performed less than one month before the pandemic alludes to relevant subtleties within negotiations that occur each time strangers meet.

“We all come with baggage,” the artist comments. “I may bring the common cold, or I may bring the cure for a cold that is uncommon,” he says, poetically addressing the unknown value that we each carry into shared spaces. In the balance, we must stay open to each other, even when places are closed.

Ayzay Ukwuoma is an American multidisciplinary artist working in paint, text, installations, and performance. Often relating to displacement and connectivity, his works include components of spatial intervention, plays on sign systems, and representations of language in codified forms, such as hand-written Morse or binary code—0’s and 1’s. He is an MFA graduate of CalArts and has a Master’s degree in Information Systems and Technology from George Washington University.

ABOUT THE NEWS SOURCE:
Ayzay Ukwuoma

Ayzay Ukwuoma is an American multidisciplinary artist working in paint, text, installations, and performance. Often relating to displacement and connectivity, his works include components of spatial intervention, plays on sign systems, and representations of language in codified forms, such as hand-written Morse or binary code-0's and 1's. He is an MFA graduate of CalArts and has a Master's degree in Information Systems and Technology from George Washington University.

LEGAL NOTICE AND TERMS OF USE: The content of the above press release was provided by the “news source” Ayzay Ukwuoma or authorized agency, who is solely responsible for its accuracy. Send2Press® is the originating wire service for this story and content is Copr. © Ayzay Ukwuoma with newswire version Copr. © 2020 Send2Press (a service of Neotrope). All trademarks acknowledged. Information is believed accurate, as provided by news source or authorized agency, however is not guaranteed, and you assume all risk for use of any information found herein/hereupon.