ImmersiON-VRelia Unveils the Latest in Virtual Reality at CES 2015

"We are empowering people to experience the digital world in a whole new way, blurring the line between real and virtual, and allowing people to be anywhere and do anything," said Manuel Gutierrez Novelo, CEO of ImmersiON-VRelia.

Headlining the show, is “The GO,” ImmersiON-VRelia’s universal, smartphone powered Head Mounted Display. The GO transforms most iOS and Android smartphones into a powerful Head Mounted Display that enables a fully immersive virtual reality experience. This unique device features adjustable focus for each eye, so no glasses are needed, as well as eye-separation control. The versatility of the GO enables immediate compatibility with hundreds of millions of smartphone users.

The GO is available as a bundle with the Gamepad-F2 special edition from Viaplay. This fully featured smart gamepad is optimized for the Immersion-VRelia experience so users can enjoy and navigate The AlterSpace without having to physically touch the phone screen.

ImmersiON-VRelia will also be demonstrating the BlueSky Pro to a select group of partners: BlueSky Pro is the Ruggedized, Wide Field of View, Head Mounted Display designed for unparalleled Out of Home Entertainment. BlueSky Pro comes with dual Full HD displays, and optics superior to any other offering in the market.

“We are empowering people to experience the digital world in a whole new way, blurring the line between real and virtual, and allowing people to be anywhere and do anything,” said Manuel Gutierrez Novelo, CEO of ImmersiON-VRelia.

ImmersiON-VRelia will be showcasing many different types of stereoscopic 360 Immersive experiences through its AlterSpace platform, which serves as a Virtual Environment, Content Marketplace, and VR multimedia center. Topping this content are productions from JauntVR, Specular Theory, 360 Heros, and premiere partner, ThinkUp.

ABOUT IMMERSION-VRELIA:
ImmersiON-VRelia is focused exclusively on the creation of wide field-of-view 3D Stereoscopic Head Mounted Displays and Heads Up Displays for virtual reality and Augmented Reality for multiple industries. For more information about ImmersiON-VRelia, visit http://www.immersionvrelia.com/. 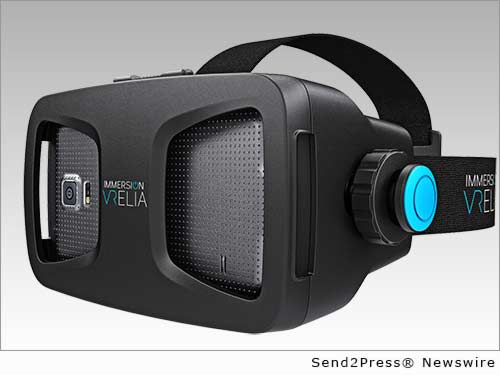 NEWS ARCHIVE NOTE: this archival news content, issued by the news source via Send2Press Newswire, was originally located in the Send2Press® 2004-2015 2.0 news platform and has been permanently converted/moved (and redirected) into our 3.0 platform. Also note the story “reads” counter (bottom of page) does not include any data prior to Oct. 30, 2016. This press release was originally published/issued: Tue, 06 Jan 2015 17:20:19 +0000

View More Electronics News
"We are empowering people to experience the digital world in a whole new way, blurring the line between real and virtual, and allowing people to be anywhere and do anything," said Manuel Gutierrez Novelo, CEO of ImmersiON-VRelia.

ABOUT THE NEWS SOURCE:
ImmersiON-VRelia

LEGAL NOTICE AND TERMS OF USE: The content of the above press release was provided by the “news source” ImmersiON-VRelia or authorized agency, who is solely responsible for its accuracy. Send2Press® is the originating wire service for this story and content is Copr. © ImmersiON-VRelia with newswire version Copr. © 2015 Send2Press (a service of Neotrope). All trademarks acknowledged. Information is believed accurate, as provided by news source or authorized agency, however is not guaranteed, and you assume all risk for use of any information found herein/hereupon.