The one thing every parent fears, the kidnapping of a young child, is the focus of “Abduction.”

WASHINGTON, D.C., May 11, 2017 (SEND2PRESS NEWSWIRE) — Walter Blair’s third novel obviously demonstrates that the success of his first two novels were not flukes. The literary skills presented by Blair in “Abduction” (2017, WBlair Publishing) place him in a class reserved for John Grisham, Danielle Steel, David Baldacci, Lee Child and Michael Connelly, to name a few. 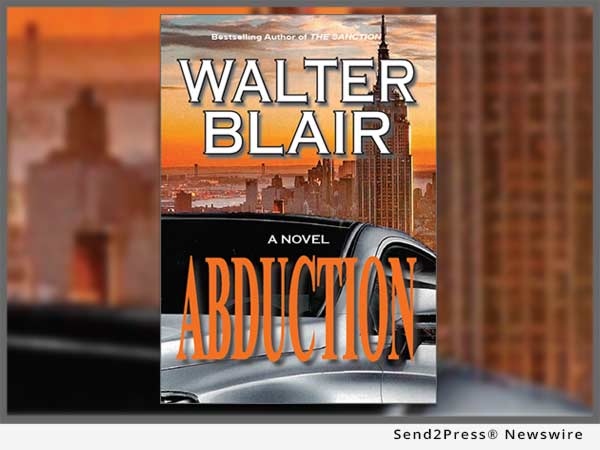 The one thing every parent fears, the kidnapping of a young child, is the focus of “Abduction.” The lives of the Madisons are irreparably altered when 5-year old Chrissy Madison is taken. A life and death struggle to find the kidnapper of a young child takes readers across continents.

Blair’s novel goes inside the minds of the abductor, the abductee, and the parents who are determined to rescue their daughter before time runs out. Blair’s ingenious use of prose to depict triumph over adversity is admirable. Readers will find themselves rooting for Kourtney and Daniel, Chrissy Madison’s parents.

“Abduction” will make a great movie as a compelling, utterly breathtaking drama.

“My first two novels, ‘Presidential Approval’ and ‘The Sanction,’ did better than my wildest dreams could ever have imagined,” admits Blair. “They quickly picked up pace internationally, and truly may become global bestsellers. Jennifer Steele resonated extremely well with readers so I wanted to waste no time in bringing her back into their lives. These stories once again mirror the terrorism threats and activities running rampant in the real world. The final installment ‘Project H2O’ is two years away.”

See it as a cocktail of fact and fiction with a gray area that will leave you guessing. This is a trilogy with far reaching dimensions.

“I am presently at my desk completing two novels. The first is called ‘Undergrad’ and the second is ‘West Point.’ In ‘Undergrad,’ my very next publication, Mozart Castle enters college as a freshman, but his academic studies are soon augmented by erogenous experiences with women who share with him the magic and mysteries of their feminine treasures. Nothing prepares Mozart for what he would discover. However, by his senior year his journey from boy to man is complete — almost.”

The author continues, “In ‘West Point,’ the story takes the reader to Germany where a very attractive colonel, Jane Sherwood, disappears after a night out on the town with five male officers also stationed at the U.S. Military Base in Frankfurt. Jane is never seen again. Now back in the U.S. all five of Colonel Sherwood’s fellow officers are apparently marked for death. The one thing they all have in common with Jane Sherwood is that they were all once cadets at West Point Military Academy. Stay tuned, because this mystery thriller is coming into your hands sooner than you think.”

Order books from: http://www.walterblairbooks.com/, https://www.basamagazines.com/ or WBlair Publishing. For eBooks go to NOOK, Amazon, and iTunes, among others.

About the Author:
Walter Blair practiced law in Washington, D.C. and Maryland, winning significant cases including the landmark immigration case embedded in U.S. v. Paul Russell, cited by the Supreme Court in Padilla v. Kentucky, 2340 S. St. 1473 (2010). In that year, Blair began to write fiction and nonfiction books. The author was educated in London, England, then New York where he completed a Bachelor’s Degree at the State University of New York, New Paltz. He then completed both a Master’s Degree in City and Regional Planning, and a Law Degree at Howard University in Washington, D.C. Blair maintains his permanent residence in the D.C. metropolitan area.

View More Books and Publishing News
"My first two novels, 'Presidential Approval' and 'The Sanction,' did better than my wildest dreams could ever have imagined," admits Blair.

ABOUT THE NEWS SOURCE:
WBlair Publishing

WBlair Publishing (Walter Blair Books) publishes original novels and nonfiction by best-selling author Walter Blair. The author was educated in London, England, then New York where he completed a Bachelor's Degree at the State University of New York, New Paltz. He then completed both a Master's Degree in City and Regional Planning, and a Law Degree at Howard University in Washington, D.C.

LEGAL NOTICE AND TERMS OF USE: The content of the above press release was provided by the “news source” WBlair Publishing or authorized agency, who is solely responsible for its accuracy. Send2Press® is the originating wire service for this story and content is Copr. © WBlair Publishing with newswire version Copr. © 2017 Send2Press (a service of Neotrope). All trademarks acknowledged. Information is believed accurate, as provided by news source or authorized agency, however is not guaranteed, and you assume all risk for use of any information found herein/hereupon.