SAN FRANCISCO, Calif., July 13, 2020 (SEND2PRESS NEWSWIRE) — In response to President Trump’s increase in rhetoric against education, immigration, Black Lives Matter, Tik Tok™ and his defense of the Confederate flag and its monuments, Professor Hal Harper of Oakland, California, retired professor of English as a Second Language (ESL), has launched his own salvo in the culture war as he releases “In America – A New Musical” to the public. 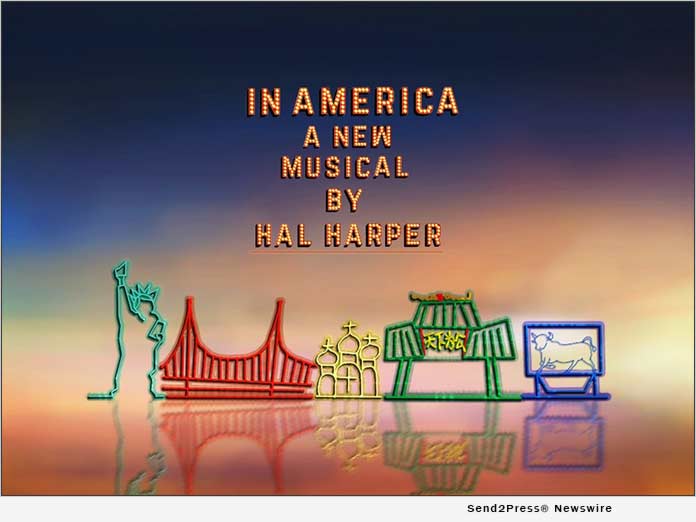 More than 20 years in the making, this modern immigrant tale (which introduces 25 characters and 18 brand-new musical numbers) tells the story of young Mr. Johnson, a recent teaching graduate from New York City who has just landed his first job at a small community college in San Francisco, California where he is assigned as a Teacher of English to Speakers of Other Languages (TESOL) to immigrant students recently arrived In America.

The rookie teacher soon finds himself in a quandary however as he finds his new school facing budget cuts, a growing anti-immigrant sentiment spearheaded by the local “Thug Boys” and the affections of a beautiful Chinese student, Mei Li, unbeknownst to him.

“They always say, ‘Write about what you know,’ so I did,” explains Professor Harper. “As the years passed, I realized that the show I’d written before 9-11 is actually more relevant today than it was when I first wrote it. To modernize this musical time capsule, I added songs and story lines, with references to budget cuts in education, immigration, racism, Russia, China, Vietnam, Dreamers, Thug Boys, ‘Tax the Rich,’ and Ti(c)k To(c)k, ‘the greatest student prank ever,’ so that by now, In America has something for everyone and should be great fun for the whole family. And given the increased in shrillness of Donald Trump’s rhetoric as of late, there seems to be no better time to launch this effort than now.”

Viewers are invited to visit the show’s website at https://inamericaproductions.com/ and hear the show’s complete selection of musical numbers, read its lyrics, sheet music and script excerpts, visit the merchandise page or make a donation to a future production of “In America” on the stage or screen.

Mr. Harper hopes that his work can one day become the first publicly sponsored musical to go all the way to Broadway.

View More Music and Recording News
"They always say, 'Write about what you know,' so I did," explains Professor Harper. "As the years passed, I realized that the show I'd written before 9-11 is actually more relevant today than it was when I first wrote it."

Professor Hal Harper of Oakland, California, retired professor of English as a Second Language (ESL), has launched his own salvo in the culture war as he releases "In America - A New Musical" to the public.

LEGAL NOTICE AND TERMS OF USE: The content of the above press release was provided by the “news source” Professor Hal Harper or authorized agency, who is solely responsible for its accuracy. Send2Press® is the originating wire service for this story and content is Copr. © Professor Hal Harper with newswire version Copr. © 2020 Send2Press (a service of Neotrope). All trademarks acknowledged. Information is believed accurate, as provided by news source or authorized agency, however is not guaranteed, and you assume all risk for use of any information found herein/hereupon.