"It just goes to show you what a great country we live in when someone like me has the opportunity to run for president," says Donald Eugene Lowe. "Together, we can make a meaningful difference for our families, our communities and our country."

SAN ANGELO, Texas, Dec. 21, 2015 (SEND2PRESS NEWSWIRE) — Donald Eugene Lowe says he has been preparing for this role his whole life. And, he plans to share the details of his presidential campaign and promises in a worldwide broadcast scheduled to take place on December 23 at 1:01 p.m. EST. Interested parties can also attend the event live at the Clarion Hotel at 441 Rio Concho Drive in San Angelo.

So, what sets this candidate apart from others? Well, for one, he is homeless.

“It just goes to show you what a great country we live in when someone like me has the opportunity to run for president,” he says.

Lowe’s experience and background are diverse. He is an active supporter of the military and says he’s always “loaded and ready to go.” Among his political stances, he believes in the right to bear arms, less taxes, guaranteed higher learning, a better healthcare system and less government.

He says that, like many citizens, he has a desire to play an active role in making his community, state and country a safer, and better place to raise children, to run a business and to forge a future filled with unlimited promise.

He urges those who share a similar vision to connect with him to make it happen.

“Together, we can make a meaningful difference for our families, our communities and our country,” he says.

There will be up to nine hours of live broadcast and Lowe will be taking questions from around the globe. The event area, itself, can host up to 300 people.

DISCLAIMER: This press release is paid for by the Donald Eugene Lowe presidential campaign fund. 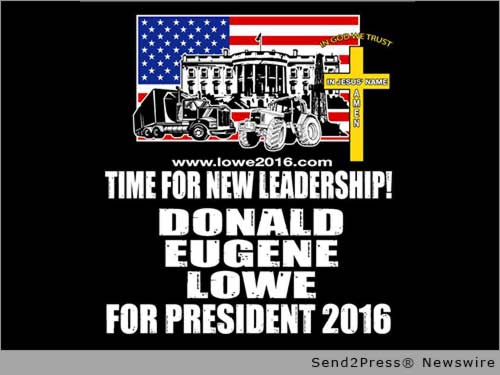 NEWS ARCHIVE NOTE: this archival news content, issued by the news source via Send2Press Newswire, was originally located in the Send2Press® 2004-2015 2.0 news platform and has been permanently converted/moved (and redirected) into our 3.0 platform. Also note the story “reads” counter (bottom of page) does not include any data prior to Oct. 30, 2016. This press release was originally published/issued: Mon, 21 Dec 2015 17:49:50 +0000

View More Elections and Politics News
"It just goes to show you what a great country we live in when someone like me has the opportunity to run for president," says Donald Eugene Lowe. "Together, we can make a meaningful difference for our families, our communities and our country."

LEGAL NOTICE AND TERMS OF USE: The content of the above press release was provided by the “news source” Donald Eugene Lowe or authorized agency, who is solely responsible for its accuracy. Send2Press® is the originating wire service for this story and content is Copr. © Donald Eugene Lowe with newswire version Copr. © 2015 Send2Press (a service of Neotrope). All trademarks acknowledged. Information is believed accurate, as provided by news source or authorized agency, however is not guaranteed, and you assume all risk for use of any information found herein/hereupon.