MURRAY, Iowa, Nov. 8, 2017 (SEND2PRESS NEWSWIRE) — Clarke County, Iowa’s favorite daughter, Governor Kim Reynolds will join hundreds of community members, leaders and veterans in a ceremonial dedication of Clarke County’s Freedom Rock. On Saturday, November 11, from 11 a.m. to 12 p.m., the latest installment by Freedom Rock painter, Ray “Bubba” Sorensen, will be the site of a Veteran’s Day celebration and dedication. Those in attendance will hear from Governor Reynolds, along with local leadership, military officials, and community members from throughout south-central Iowa. 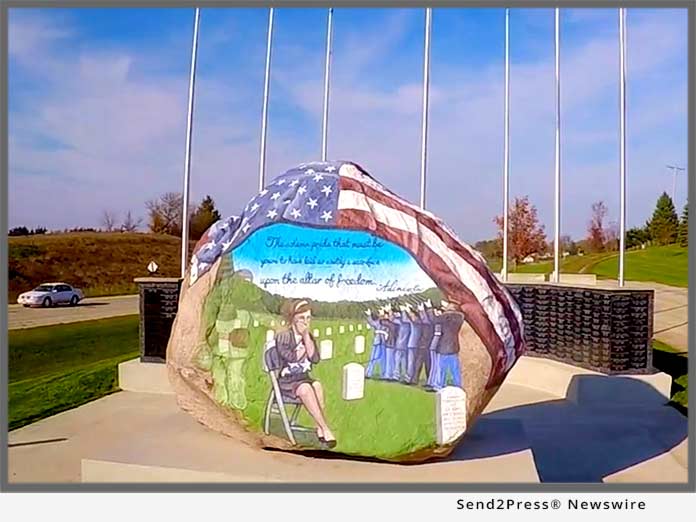 The dedication ceremony will be held at the recently constructed Clarke County Freedom Rock and Honor Wall, located at the Murray Cemetery off Highway 34 and County Highway R16.

Jason Gibbs, member of the Clarke County Freedom Rock and Honor Wall Committee said the program should last about 30 minutes, and guests are invited to lunch at the Murray High School following the program.

Seating will be limited, so guests are encouraged to arrive early, use the shuttle services available from Murray, Osceola, and the Bunn Manufacturing locations and to bring their own lawn chairs.

About the Clarke County Freedom Rock:

Sorensen began painting the original Freedom Rock, located north of Greenfield, Iowa, in 1999 after being inspired by the movie “Saving Private Ryan.”

His original rock, which was painted with a new design each Memorial Day, quickly garnered local, regional and national recognition. Sorensen soon decided to spread the message of the Freedom Rock by committing to painting a Freedom Rock in each of Iowa’s 99 counties and beyond.

According to TheFreedomRock.com web site, the Clarke County Freedom Rock is 67th of 68 current honorary displays.

Since Sorensen designs each rock to represent the military members and history of each county, Sorensen and the Clarke County Freedom Rock and Honor Wall committee started conversations in the fall of 2015 to brainstorm ideas and themes for the rock being dedicated on Saturday.

“That usually means finding specific veterans,” Sorensen said while working on another Freedom Rock in Cresco. “We landed on killed in action. That’s why the front side of that (rock) is a gold star family member clutching a flag that was given to them and the ghost of the fallen soldier touching her.”

The front face of the Clarke County Freedom Rock also features a quote from Abraham Lincoln.

The west side of the rock features a large red bull logo, signifying the 34th Infantry Division, which Highway 34 is named after.

“There was a guy from Garner, Iowa, driving by and he saw that red bull’s face,” Gibbs said. “It’s got great history. This guy’s dad was in the 34th Infantry Division. That was something Bubba added and thought would be appropriate. I’m so glad he did. That’s a big deal to tens of thousands of people.”

Gibbs said the committee wanted to give everyone an opportunity to have their veteran recognized on the wall, especially since there will be people from all over the country visiting the Freedom Rock and Honor Wall.

Iowa Governor, Kim Reynolds, has a special connection with the community in Clarke County. A southern Iowa native, Reynolds started her political career serving four terms as the Clarke County Treasurer before moving on to the Iowa Senate representing district 48 in 2008.  In 2011, Governor Terry Branstad hand-picked Reynolds as Lieutenant Governor where she served until Branstad’s departure in 2016.

Drone Video footage of the Clarke County Freedom Rock site can be found at: https://vimeo.com/241939685

View More City and County Government News
"There was a guy from Garner, Iowa, driving by and he saw that red bull's face," said Jason Gibbs, member of the Freedom Rock Committee. "It's got great history. This guy's dad was in the 34th Infantry Division."

LEGAL NOTICE AND TERMS OF USE: The content of the above press release was provided by the “news source” Clarke County Development Corporation or authorized agency, who is solely responsible for its accuracy. Send2Press® is the originating wire service for this story and content is Copr. © Clarke County Development Corporation with newswire version Copr. © 2017 Send2Press (a service of Neotrope). All trademarks acknowledged. Information is believed accurate, as provided by news source or authorized agency, however is not guaranteed, and you assume all risk for use of any information found herein/hereupon.