NEW YORK, N.Y., Sep. 15, 2022 (SEND2PRESS NEWSWIRE) — iToolab Co Ltd announces iToolab AnyGo, one of the most popular Geo spoofing tools for iOS, now supports the latest iOS 16. With Apple releasing its latest software update, the engineers at iToolab have again put on their coding caps and released the latest version of AnyGo that’s compatible with iOS 16. 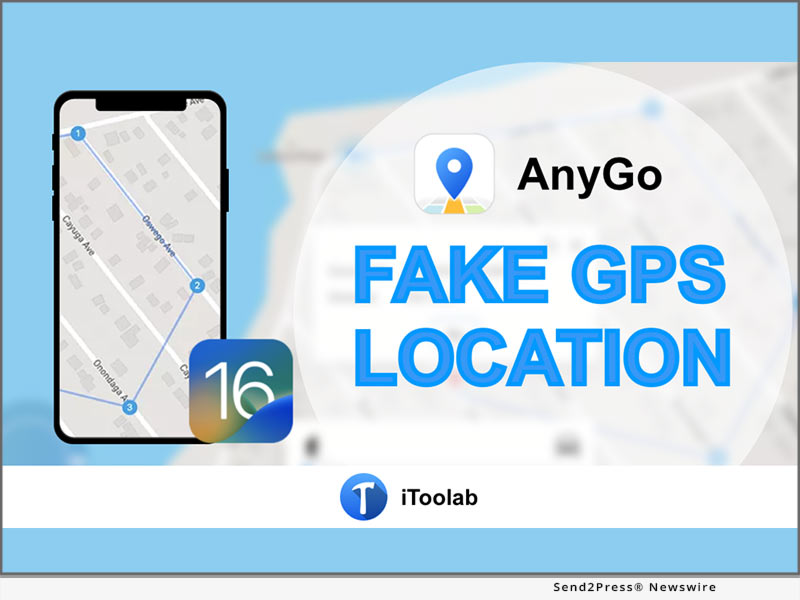 It means if you have already updated your iDevices to the latest version or are planning to buy one of the iPhone 14 models, you’ll be able to spoof your geolocation and access geo-restricted content without any hassle.

For readers who don’t know, iToolab is a Hong Kong-based software development company that primarily designs high-quality iOS tools to help users tackle different technical scenarios in their daily life. Over the past few years, the team has released dozens of iOS apps that make it easier for people to deal with different issues and enjoy a seamless user experience.

AnyGo is one of the most reputed iOS applications designed by iToolab. It’s a professional geo-spoofing tool that allows users to fake their GPS movement to access geo-restricted content and play games like Pokémon Go to enjoy uninterrupted gaming sessions. With iToolab AnyGo, players can change GPS location on iPhone and virtually control their movement on the map using a Joystick to catch more Pokémon and increase their Experience Points in the game. The best part is that AnyGo lets users change their location to anywhere in the world, which means you can even collect some of the rarest Pokémon as well.

Another key feature of AnyGo is its GPS simulation. Users have the liberty to select a virtual route on the map and simulate their movement on this route. You can even customize the moving speed to avoid getting caught.

Now, coming to the real deal – with the latest iToolab AnyGo V 5.9.0, you can now fake GPS location on your latest iOS 16 devices. However, the feature will be only available after you’ve enabled the “Developer Mode”. To do this, go to “Settings>Privacy & Security>Developer Mode” and toggle the switch on to enable the Developer Mode.

Once the Developer Mode is enabled, you’ll be able to easily manipulate your device’s GPS signals and even fake GPS movement on the latest iOS 16.

Even with the latest version of iToolab AnyGo, you’ll find all the features to manipulate GPS movement easily. These features include

With AnyGo, you can teleport your GPS location in the world with a single click. AnyGo even allows users to select a GPS location using specific GPS coordinates.

2. Simulate GPS Movement Along Any Route

You can manually draw a route on the map using the two-spot and multi-spot modes and use AnyGo to stimulate the GPS movement on the particular route. During this simulation, you can also control your character’s movement speed.

AnyGo also supports the GPS Joystick feature that lets users control their GPS movement on the map using the arrow keys on their keyboard. This is an ideal feature for users who want to play Location-Based games and have full control over their movement.

4. Play Location-Based Games Without Going Outside

Finally, the biggest advantage of a tool like iToolab AnyGo is its ability to manipulate GPS location in games like Pokemon Go. You can also use the tool to play other location-based games and control your GPS movement virtually without going outside whatsoever.

Unlike its competitors, iToolab AnyGo is available at a pocket-friendly price and you can also grab exclusive discounts on the tool. Here’s a detailed price overview of iToolab AnyGo.

Check this link to get the latest iToolab AnyGo Coupon Codes: https://itoolab.com/location/itoolab-AnyGo-coupon/

As far as compatibility is concerned, AnyGo is available for Mac 10.11 and later, and Windows 7/8/8.1/10/11. It supports all iPhone/iPad/iPod with latest iOS 16 versions. Being a cross-platform geo spoofer, you can install iToolab AnyGo on both Windows and macOS and enjoy its functionality without any hassle.

iToolab is a Hong Kong-based software development team designing high-performance iOS to tackle a variety of iOS apps that helps users tackle different iOS issues in their daily life. The team has been building feature-packed iOS tools for more than 10 years. Over the years, iToolab has acquired a customer base of 55,000 users from different corners of the world. In addition to AnyGo, the company has released several other tools such as UnlockGo and FixGo – two of the most popular iOS apps in the world.

iToolab Co Ltd (iToolab) is a Hong-Kong-based software company that's working with a vision to help iPhone users resolve different technical issues on their iDevices (iPhone, iPad, and iPod Touch). The company has served users across 50+ countries and has helped over 1,00,000 users tackle a variety of iOS problems. The developers have expertise in implementing the latest trends to release user-friendly applications for their worldwide audience. With 10+ years of experience in the industry, iToolab is ranked among the top-ranked software providers in the market.

LEGAL NOTICE AND TERMS OF USE: The content of the above press release was provided by the “news source” IToolab Co Ltd or authorized agency, who is solely responsible for its accuracy. Send2Press® is the originating wire service for this story and content is Copr. © IToolab Co Ltd with newswire version Copr. © 2022 Send2Press (a service of Neotrope). All trademarks acknowledged. Information is believed accurate, as provided by news source or authorized agency, however is not guaranteed, and you assume all risk for use of any information found herein/hereupon.