RACINE, Wis., Feb. 18, 2020 (SEND2PRESS NEWSWIRE) — In tandem with 75th Anniversary of the flag-raising on Mt. Suribachi, the Iwo Jima Memorial Midwest Project (IJMM) is launching a nationwide program to build a new Iwo Jima Monument. The new statue will replace the faces of two flag-raisers that were misidentified with the actual Marines who participated. 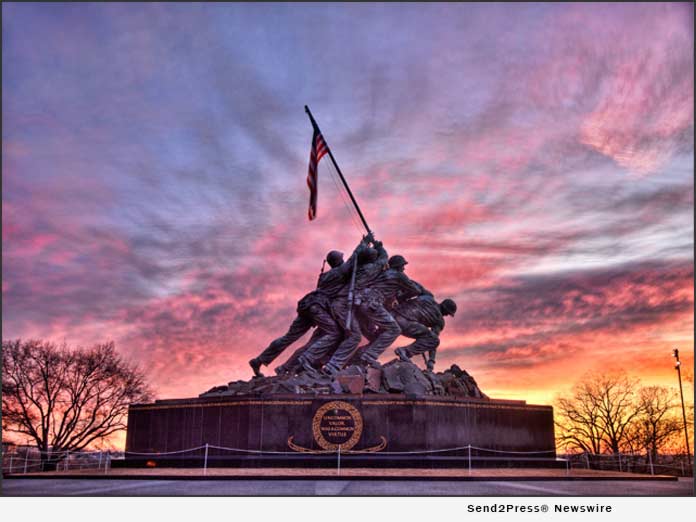 Harold “Pie” Keller and Harold Schultz were identified by HQ USMC with the aid of FBI forensics as the Marines raising the flag. Therefore, the new IJMM statue will be the very first monument built that reflects the exact image of the photograph.

The raising of the US flag over Mount Suribachi, was the first foreign flag ever to fly on Japanese soil. The photograph of the flag raising was taken by AP photographer Joe Rosenthal. It became an iconic image of not only the battle, but of the War in the Pacific and one of the most reproduced photographs in the world.

For 36 days in February-March of 1945, the Battle of Iwo Jima Island saw some of the fiercest fighting of the Pacific War. In the five week battle American casualties reached 26,040 of which 6,821 Marines were killed and 23,573 wounded 33% of their available force, or one in every three that landed.

The new Monument will be placed in Racine, Wisconsin, just north of Chicago and South of Milwaukee. Racine is the home of Marine Corps League Detachment 346 that has been doing a Living Memorial Float of the flag-raising for over 74 years. The Marines hold the position of the famous statue for up to two hours in parades and various events.

World renowned Sculptor, Robert Bricker of the Bronze Craft Foundry in Charlottsville, Virginia will produce the 40 percent size of original size bronze monument. Bricker was the sculptor selected by National Parks to work on the restoration of the original statue in Arlington. The figures will be 13 feet tall. It will take 16 months to produce and weigh 20,000 lbs. 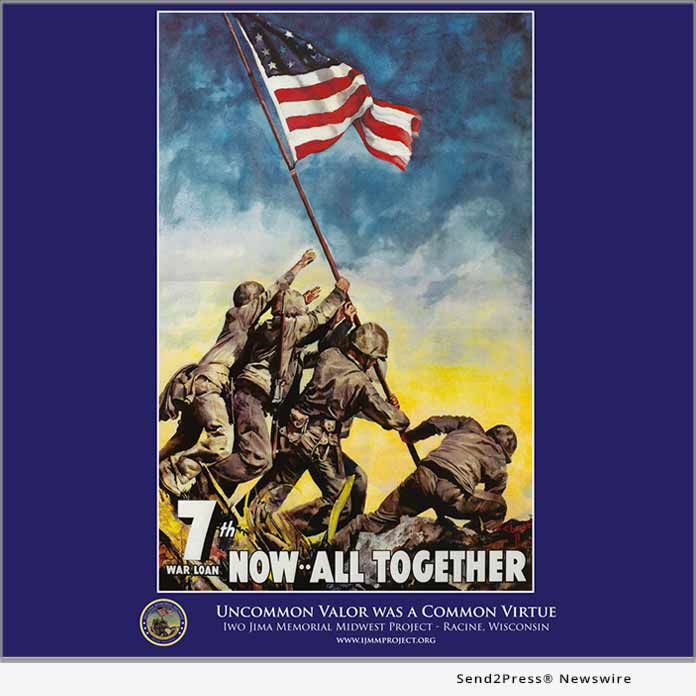 The two year, $4 Million dollar fundraising project is supported by all volunteer Marines, Veterans, Veterans Support Groups and dedicated civilians. The fundraising efforts are nationwide, supported with a wide range of merchandise for donors. Solicitation of Corporate sponsors is underway.

Extensive information can be found at their website http://www.ijmmproject.org

Once completed the Monument location will be used as a venue to host a variety of Veterans events and expand educational support elements for elementary schools. The Project will in-turn institute fund gathering efforts to support needy Veterans

The Iwo Jima Memorial Midwest Project is a momentous undertaking that will benefit the preservation of the most recognizable, patriotic image in the history of World War II and the United States Marine Corps.

“With the generous help of Americans and Veterans, the Monument will help preserve the Spirit of America, it’s symbol of Patriotism and Love of Country. It will forever pay tribute to the thousands of Marines and Veterans that paid the ultimate sacrifice to preserve the Freedoms we enjoy today,” said John Capriotti, IJMM Project Director.

Media Press Kit Section with photos, videos and historical documents and links is available on the website http://www.ijmmproject.org/

View More NonProfit and Charities News
"With the generous help of Americans and Veterans, the Monument will help preserve the Spirit of America, it's symbol of Patriotism and Love of Country. It will forever pay tribute to the thousands of Marines and Veterans that paid the ultimate sacrifice to preserve the Freedoms we enjoy today," said John Capriotti, IJMM Project Director.

The Iwo Jima Memorial Midwest Project is a momentous undertaking that will benefit the preservation of the most recognizable, patriotic image in the history of World War II and the United States Marine Corps. Our efforts are to preserve and expand the awareness of the how importance of this significant image is to the history of the United States. We are building a new Iwo Jima Monument in the Midwest, honoring the Marines who paid the ultimate sacrifice to retain the values and freedoms we enjoy today.

LEGAL NOTICE AND TERMS OF USE: The content of the above press release was provided by the “news source” Iwo Jima Memorial Midwest Project Inc. or authorized agency, who is solely responsible for its accuracy. Send2Press® is the originating wire service for this story and content is Copr. © Iwo Jima Memorial Midwest Project Inc. with newswire version Copr. © 2020 Send2Press (a service of Neotrope). All trademarks acknowledged. Information is believed accurate, as provided by news source or authorized agency, however is not guaranteed, and you assume all risk for use of any information found herein/hereupon.