Kelli Phillips, former news anchor of KFDM in Beaumont said, "I have watched this show long before Bob and I even knew one another and I've always admired the storytelling. Now, I get to bring my own brand of storytelling to TCR."

DALLAS, Texas, Sept. 1, 2015 (SEND2PRESS NEWSWIRE) — Bob Phillips will no longer be traveling alone on the popular TV series, “Texas Country Reporter” (TCR). Beginning this September Kelli Phillips will join TCR and travel the back roads of Texas with Bob.

Kelli Phillips, former news anchor of KFDM in Beaumont said, “I have watched this show long before Bob and I even knew one another and I’ve always admired the storytelling. Now, I get to bring my own brand of storytelling to TCR.”

Kelli and Bob are now married having exchanged vows in 2007. As it turned out they worked together at the same TV station. TCR airs every week on KFDM where Kelli was the number 1 news anchor at the CBS affiliate.

“This is the biggest change our show has ever made,” said Bob Phillips when making the announcement. “People tell me almost daily that I must have the best job in the world and I’m sure I do. This change makes it that much better!”

Beginning with the new 2015-2016 TV season, the weekend of September 12-13, Kelli and Bob will co-host TCR and, together, will extend the famous invitation to “hop in and travel with us. This is Texas Country Reporter.”

About Texas Country Reporter:
TCR is a weekly, half-hour series co-hosted by Kelli and Bob Phillips. The program airs in all 19 Texas TV markets, satellite and cable network, RFD-TV and on Sirius XM Radio Channel 80. More information is available online at http://texascountryreporter.com/.

About Phillips Productions:
Phillips Productions is a subsidiary of Phillips MediaSource, an all-in-one company specializing in development, production, branding and distribution of video content for all screens. Based in Dallas, Texas the president and CEO is Bob Phillips. More information is available online at http://phillipsmediasource.com/. 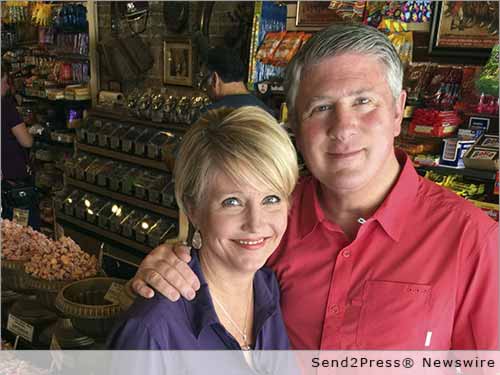 NEWS ARCHIVE NOTE: this archival news content, issued by the news source via Send2Press Newswire, was originally located in the Send2Press® 2004-2015 2.0 news platform and has been permanently converted/moved (and redirected) into our 3.0 platform. Also note the story “reads” counter (bottom of page) does not include any data prior to Oct. 30, 2016. This press release was originally published/issued: Tue, 01 Sep 2015 08:00:34 +0000

View More Business News
Kelli Phillips, former news anchor of KFDM in Beaumont said, "I have watched this show long before Bob and I even knew one another and I've always admired the storytelling. Now, I get to bring my own brand of storytelling to TCR."

Texas Country Reporter : “Hop in and travel” with Bob and Kelli Phillips on their road trip to discover the uplifting stories and interesting places of the Lone Star State. They’ll introduce you to oddball collectors, thought-provoking artists, and everyday heroes making the world a better place. And of course they’ll stop at every interesting cafe and Texas landmark along the way because, for some people, the journey is the destination. Texas Country Reporter can be seen locally in every city in Texas, as well as nationwide on the cable channel RFD-TV.

LEGAL NOTICE AND TERMS OF USE: The content of the above press release was provided by the “news source” Texas Country Reporter or authorized agency, who is solely responsible for its accuracy. Send2Press® is the originating wire service for this story and content is Copr. © Texas Country Reporter with newswire version Copr. © 2015 Send2Press (a service of Neotrope). All trademarks acknowledged. Information is believed accurate, as provided by news source or authorized agency, however is not guaranteed, and you assume all risk for use of any information found herein/hereupon.