SOUTH GATE, Calif., June 14, 2016 (SEND2PRESS NEWSWIRE) — The University of California San Diego along with their partners including SWS Panel and Truss, the builders of the engineered Mid-Rise Cold-Formed Steel Building Wall Systems, is preparing for the largest simulated earthquake testing on June 15 in San Diego, less than a week after a recorded 5.2 real earthquake took place in San Diego. 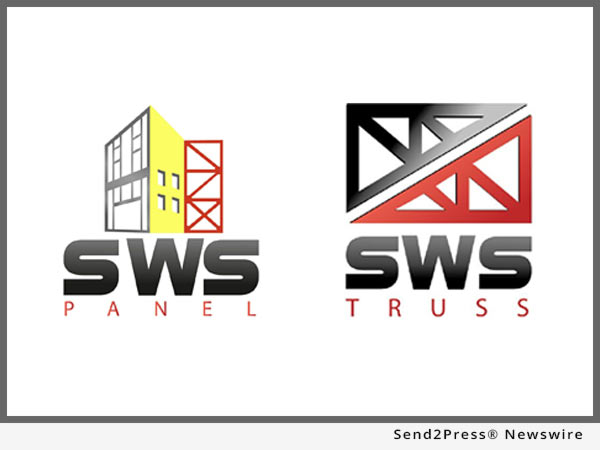 During the past months in preparation (design & planning) and especially for the first phase of core structural system construction, which occurred remarkably within just over one week, the HUD-Industry Research Partnership sponsored test building in support of the investigation of Mid-Rise Cold-Formed Steel Building Systems is ready for media viewing and interviews.

We are happy to report that within the past week the tallest ever CFS-framed test building has been fully erected on the large outdoor shake table at UC San Diego. Over the next week the primarily interior construction will be equipped with seismic instrumentation of the building and its key structural components.

The Department of Housing and Urban Development, California Seismic Safety Commission, and more than 10 industry sponsors, including SWS Panel and Truss, partnered to perform a unique experimental research program. This research aims to evaluate the earthquake and post-earthquake fire performance of mid-rise CFS-building systems through full-scale earthquake and live thermal testing of a 6-story wall-braced system. Central to this effort is the construction of a full-scale portion of a 6-story CFS-wall braced building directly on the UCSD Large High Performance Outdoor Shake Table.

Wall and floor systems for the building are assembled in a panelized fashion off-site at the SWS Panel and Truss Facility in South Gate, Calif., thus the overall erection time of the building is dramatically reduced. The test building will be subjected to low amplitude white noise motions and sequentially increasing in amplitude earthquake motions. Subsequently, live thermal tests will be conducted on two floors of the building, in corridor and room like spaces strategically designed to investigate thermal patterns that develop due to reduced compartmentation ensued during the earthquake motions.

The Media is invited to view the Seismic Testing at UC San Diego on June 15, 2016, between noon and 2 p.m., and may film and take interviews of the event. There will be a drone flying inside the building with a live feed to screen outside. Media may film from the exterior. To get the specifics on logistics and to record your participation prior to arrival contact B Scene Agency at 949-777-6772 or email Events@bsceneagency.com to get your Press Pass.

More About SWS Panel and Truss:
SWS Panel and Truss plays an integral role in the future of engineering and design of wall systems to endure large earthquakes, that have become disastrous all over the world, as we build higher and faster commercial, multi-use and even residential high rise buildings.

SWS Panel and Truss is located in South Gate, California, occupying a 110,000 sq. ft. The factory is specifically designed to roll-form, and assemble load bearing walls, floor panels and roof trusses. The factory is state of the art, using the latest technology in pre-fabricated wall and truss manufacturing. Included are a BIM Modeling and Auto Cad Design Department with Design Engineers and highly skilled Veterans.

LEGAL NOTICE AND TERMS OF USE: The content of the above press release was provided by the “news source” Superior Wall Systems, Inc. or authorized agency, who is solely responsible for its accuracy. Send2Press® is the originating wire service for this story and content is Copr. © Superior Wall Systems, Inc. with newswire version Copr. © 2016 Send2Press (a service of Neotrope). All trademarks acknowledged. Information is believed accurate, as provided by news source or authorized agency, however is not guaranteed, and you assume all risk for use of any information found herein/hereupon.